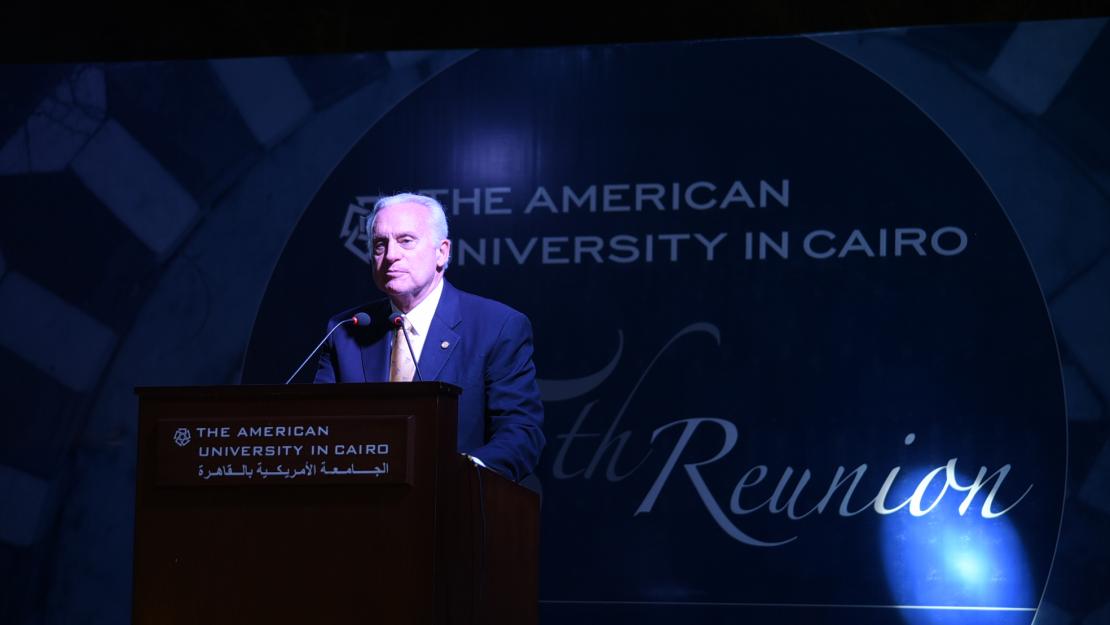 Five distinguished alumni were recognized for their professional achievements and contributions at this year’s Alumni Awards Ceremony held on May 5 at AUC New Cairo:

This year’s recipients of the Distinguished Alumni Award are:

The recipient of the Distinguished Alumni Faculty Award is:

The recipient of the Distinguished Alumni Volunteer Award is:

The recipient of the Distinguished Young Alumni Award is:

At the event, Mohamed Swelam ’05, radio presenter at Mega FM 92.7, was the Master of Ceremonies, and Mohammed Ismail ’87, vice president of the Trident Petroleum Company, gave a speech on strengthening alumni ties.

Hegazy is the chief corporate affairs officer at Etisalat Misr, responsible for managing corporate strategy, operational excellence, legal affairs, government and regulatory affairs, as well as international operations and carrier relations. He also oversees the external and internal communications departments. Previously, Hegazy was the external affairs and legal director for Vodafone Egypt and external relations department head for P&G Near East. He has also served as the vice president of PITO, a prominent commercial representation company.

Hegazy is a member of Egypt’s International Economic Forum, American Chamber of Commerce, Egyptian Junior Businessmen Association and Canadian Egyptian Business Council. He is a board member of the Egyptian Paralympics Committee and the Egyptian Council for Sustainable Development. He sits on the board of trustees of Nile University and the advisory board of AIESEC. He earned his MBA in 1998, with a concentration in marketing and international business, and his bachelor’s in mechanical engineering in 1993, both from AUC.

Assar is currently the vice chairman and CEO of EGBANK, where he has led a major internal restructuring of operational and controls efficiency to establish a modern bank for the contemporary needs of today’s customers. During his two-year tenure, Assar succeeded in quadrupling EGBANK’s assets and deposits, tripling the size of the staff population and market share, and expanding the bank’s network by doubling the number of branches. Prior to EGBANK, Assar was appointed deputy governor for monetary stability at the Central Bank of Egypt in 2004 as part of a reform program launched to overhaul the Egyptian banking system. Assar is currently a board member of Egypt New Capital, NI Capital, Misr Clearing and Settlement and EgyptAir. Assar holds a master’s in finance from a joint program between Syracuse and Harvard Universities. He has also completed the Advanced Management Program for Global Executives at University of Pennsylvania’s Wharton Business School. He holds a bachelor’s in economics from AUC.

“I am humbled and honored to be a part of this great evening and proud to be an AUCian,” said Assar.

Ramadan is professor of chemistry and dean of graduate studies at AUC. Ramadan obtained his bachelor’s in chemistry from AUC in 1991, earning AUC’s President’s Cup, and went on to pursue his graduate studies at Cambridge University, where he obtained his PhD in physical chemistry in 1996. Before signing on as an AUC faculty member in 2003, Ramadan worked at the Egyptian Ministry of State for Environmental Affairs and as an environmental consultant. Ramadan has been involved in numerous initiatives concerned with environmental and waste management, with a focus on the disposal and management of hazardous substances and waste. His current research expertise lies in the field of nanoporous materials, and much of his work concerns two areas of applications: drug delivery and environmental applications, with a focus on water treatment, membranes for desalination and water filtration.

“Even though I’ve been part of AUC as a faculty member for the past 15 years, AUC has been an important and continuous part of my life since I was an undergraduate,” said Ramadan.

Selim graduated in 2007 from AUC with a bachelor’s in accounting. After obtaining her degree, Selim started her career in the American Chamber of Commerce and has since moved to the Commercial International Bank, where she is currently a corporate senior credit analyst. In addition to her career in the financial sector, Selim dedicates her time to the arts, specifically dancing. During her undergraduate years, Selim joined the AUC Folklore Group. Prior to attending AUC, Selim studied classical ballet, jazz, hip hop, contemporary and Latin dancing. Upon graduation, she founded the AUC Alumni Folklore Group with the help of the alumni office. Her idea grew, inspiring alumni dancers from 20 different generations to join together to pursue their love of art and dance.

“Without my family, I wouldn’t be who I am today,” said Selim, while accepting her award.

Abou Zaid is an education entrepreneur with 12 years of experience focused on building organizations that solve education problems at scale. He is the co-founder and CEO of Mavericks, a network of micro-schools that provide high-quality education to hundreds of students in Egypt. Prior to Mavericks, he was the co-founder and CEO of Tahrir Academy, a blended learning platform that serves more than 250,000 Egyptian and Arab learners daily to date, empowering them to strengthen their critical thinking skills through innovative content.