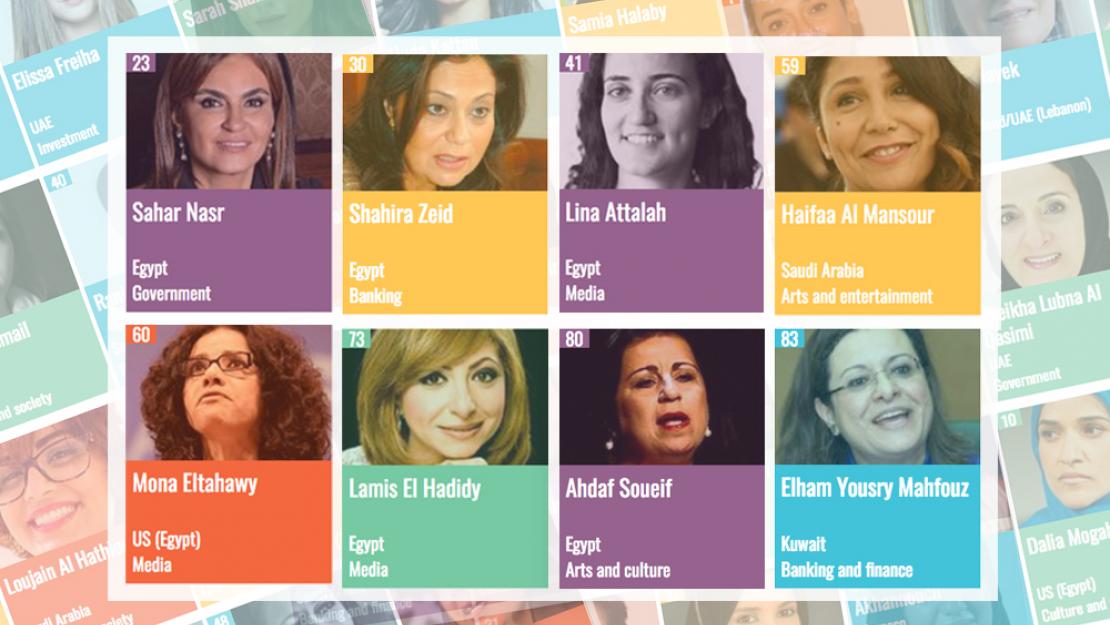 Eight AUC alumnae have been named by Arabian Business among its list of The World's Most Influential Arab Women:

Shahira Zeid '83, who received her bachelor's in business administration, was recognized for her role as the chair of MZ Investments, a holding company that operates in the energy, logistics, tourism and hospitality sectors. She is also vice chair of Maridive Group.

Sahar Nasr ’85, ’90, who received her bachelor's and master's in economics from AUC, is both Egypt's minister of international cooperation and minister of investment. She has also worked as a leading economist at the World Bank.

Lina Atallah ’04, who received her bachelor's in journalism and mass communication, is the founder of Mada Masr. Before that, she was the editor of Egypt Independent.

Haifaa Al-Mansour ’97, who received her bachelor's in English and comparative literature, is Saudia Arabia's first female filmmaker  and the the first to shoot a feature-length film, Wadjda, in Saudi Arabia in 2012.

Mona El Tahawy ’90,'92, who earned her bachelor's and master's in mass communication, is an award-winning New York-based journalist, commentator and international lecturer on Arab and Muslim issues.

Lamees Al Hadidi ’87, ’90, who received her bachelor's and master's in journalism and mass communication, is a leading news anchor and host of the daily news show on CBC channel titled Hona Al Asema (Here is the Capital).

Ahdaf Soueif (MA ’73), who received her master's in English literature, is an acclaimed author, most recently writing The Map of Love. She is also the founder of the Palestine Festival of Literature.

Elham Mahfouz ’84, who received her bachelor's in business administration, is CEO for the Commercial Bank of Kuwait and has more than 30 years of experience in the industry.