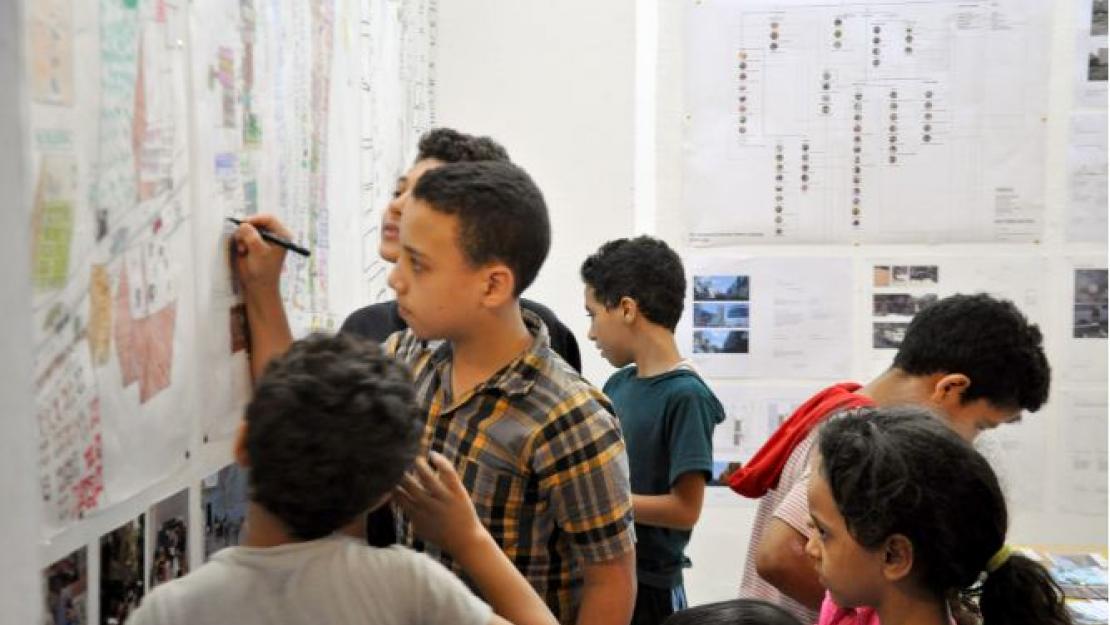 Children filling speech bubbles with their needs and urban narratives

Through her architecture project on informal housing communities in Egypt, Nada Nafeh ’11 is taking part in the Egyptian pavilion of the Venice Architecture Biennale, the world’s largest architectural exhibition, which begins this week.

Nafeh is exhibiting 40 to 50 panels from a recent workshop she organized to give a voice to residents of the informal housing community of Ard El Lewa. Her project, [in]formal Pattern Language, is part of her master’s work at the University of Waterloo in Canada, with Magda Mostafa, associate professor in the Department of Architecture,  as her thesis committee member, along with thesis supervisor Mona El Khafif and thesis committee member Adrian Blackwell from the University of Waterloo.

Nafeh’s submission to the biennale was the result of a five-day workshop she organized, inviting members of the Ard El Lewa settlement to work with students from AUC's architecture department. They participated in mapping the community, laying out the organic structure of Ard El Lewa and challenging the mainstream perception that informal housing communities are chaotic, unorganized and meaningless to the field of architecture. Co-organized by the University of Waterloo and AUC,  in collaboration with the Architecture Association (AA) at AUC, Artellewa, Save the Children, Schaduf and local participation of CLUSTER Cairo, the workshop concluded with a street exhibition featuring the community-produced patterns, maps and photograph, as well as pattern templates generated by the architecture students that will be part of the biennale exhibition.

The project is an ideal fit for this year’s biennale, which is being held under the theme, Reporting from the Front.

Informal communities in Cairo are severely underrepresented, considering they constitute the majority of the city, Mostafa pointed out. “These informal settlements make up 70 percent of our community,” she said. “There is so little written and researched about them, so it is really important for us to have something at the biennale to show how things are practiced in Egypt.”

“I hope the work in Venice will be received without adopting a certain perspective toward informal communities, but with an appreciation of the value of tactical urbanism and self-organized processes,” said Nafeh.

One of Nafeh’s motivations for her thesis was exploring the problems that arise when traditional architectural practices are applied to the reality of informal settlements. “Cairo increasingly struggles with the growing tension between formal and informal urban practices and patterns,” she explained. “The main idea of the thesis and the [in]formal Pattern Language initiative is to engage this juxtaposition by mediating between community-based efforts and top-down expertise.”

Nafeh’s thesis built on scholar Christopher Alexander’s book, A Patterned Language, that Mostafa describes as “an encyclopedia of forms and behavior of people and places that gives the universal lexicon of design and space that people can then use to build their spaces.”  Nafeh’s work expands that structure to propose an informal pattern language that architects could use to interject their expertise into the existing structure without imposing their ideas on the community.

The pattern language is also important for community members who are building and designing their own spaces. “I want to create awareness among people to optimize their patterns. As community members, designers and authorities of the future, they should be trained to think bottom-up and more sustainable.”

An important aspect of Nafeh’s work is that it was built to be an open-source manual, a living project. The websites provides the opportunity for community members to upload patterns, images or maps that will then become part of the pattern language dictionary. “The objective is to propose a replicable open-source process that allows people to take ownership of their built environment and connect their ordinary needs to environmental and urban concerns.”

Nafeh added, “The [in]formal Pattern Language is designed as an on-going project and the thesis is only a snapshot of what's to come. Although strongly based on small-scale and local interventions, the process has great potential to be replicated not only in other informal communities, but in other disciplines and conditions to generate, for example, vernacular, rural and desert pattern languages.”