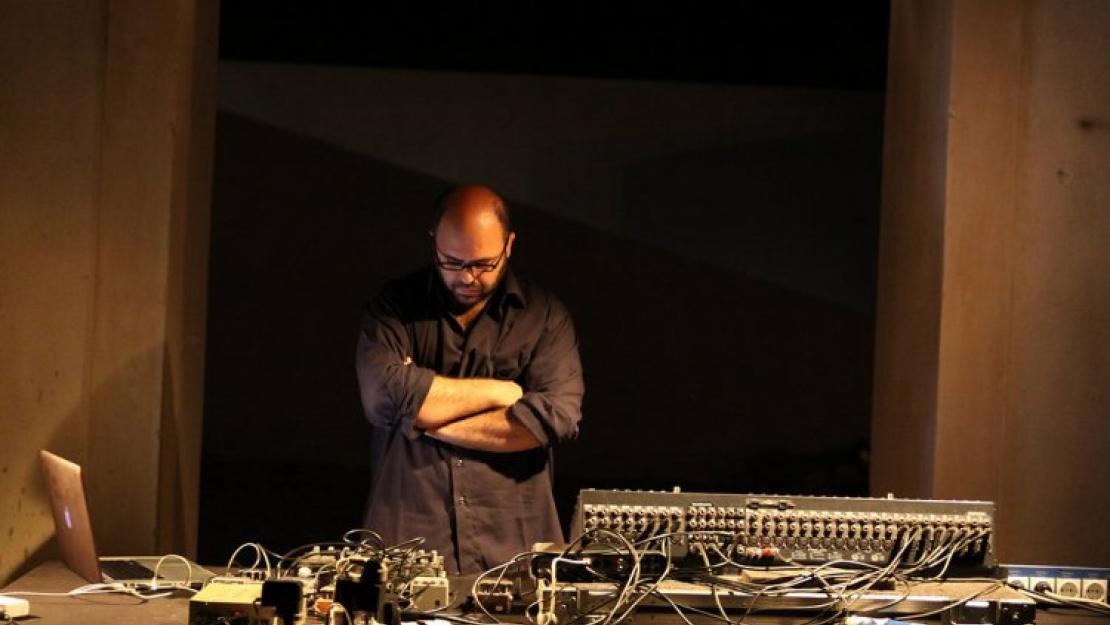 The University’s Sharjah Art Gallery has partnered with AUC alumnus and internationally acclaimed artist Hassan Khan to produce a specially tailored program titled “Footnotes to Hassan Khan.” The program is part of a newly launched initiative, AUC_Lab, which aims to bring to the University artists from the Middle East, featuring new work by these artists.

“We want to bring artists to the gallery as participants and contributors, and work on projects with them while giving them the opportunity to exhibit here and use the resources we have to create an exchange between both sides,” said Kaya Behkalam, visiting assistant professor in the Department of the Arts and director of the Sharjah Art Gallery. “This is what we call AUC_LAB.”

“Footnotes to Hassan Khan,”which runs parallel to Khan’s exhibition at the Downtown Contemporary Arts Festival, includes a lecture titled “The Artist as a Portrait of a Young Man” by Mumbai-based art curator Nida Ghouse (April 22);Taraban, an electronic music live concert by Khan at the Falaki Mainstage Theatre (April 26); and a seminar series for students, delivered by Khan on his experiences at AUC (April 26 and 29).

“What’s interesting about Hassan Khan’s practice is that he is so diverse and multifaceted,” said Behkalam. “He covers so many different practices in his work. He’s an excellent musician in terms of electronic music; he is a writer about art practice; he uses photography and painting; and his work is both performative and sculptural.”

The seminar series will give students the opportunity to discuss one of Khan’s most notable works, 17 and in AUC directly with him and Ghouse. Khan produced 17 and in AUC in 2003 based on his experiences as a teenager at AUC from 1990 to 1995. He constructed a soundproofed one-way mirrored room and sat in it for four hours every night for a period of two weeks talking to his audience. “It’s going to be a very interesting angle because, of course, it relates back to his own experience here at AUC as a student,” observed Behkalam. “Hassan Khan is one of the most prolific artists of his generation, so it’s very exciting to look at his experiences at the University and how he condensed them into an artwork.” Describing his experience in the one-way mirrored room in the introduction to the published transcript on 17 and in AUC, Khan wrote, “Although people could see and hear me, I could not see or hear except myself. All 56 hours of this performative action were documented on a digital video camera. The result is a mixture of deeply personal recollections and various theoretical attempts at deciphering and analyzing the period, as well as the situation itself.” The Sharjah Art Gallery’s collaboration with Khan marks one of the first projects in a planned series of partnerships between AUC_LAB and noted artists from around the region. AUC_LAB aims to collaborate with two different regional artists every year –– one per semester –– to hold exhibitions at the Sharjah Art Gallery. This year, it has partnered with Hassan Khan andMalak Helmy, both AUC graduates. “It’s great for AUC students to see that you can actually build a successful career as an artist in Cairo and within the region,” Behkalam said. “Students are also able to hear and see how the artists work and develop their practice, which is a unique and insightful chance to witness firsthand if you’re an aspiring artist yourself.” Photo caption: Hassan Khan preparing for a concert