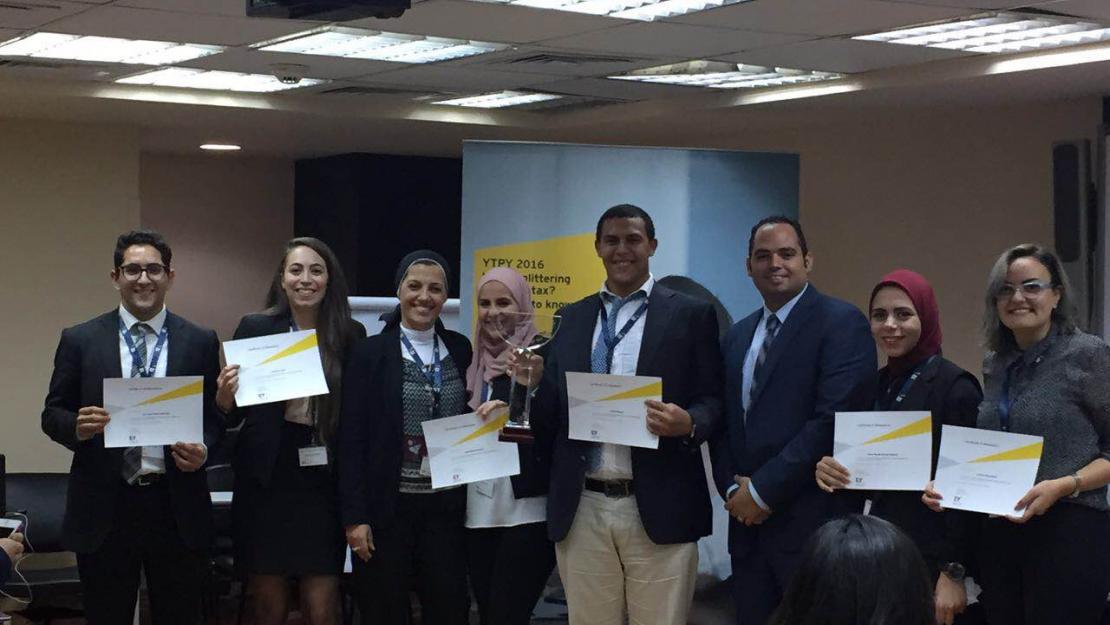 The international competition is held in more than 25 countries around the world. Finalists from each country compete on a global scale in the final phase of the competition.

Dominating the competition, Dahawy noted that winning first place left him elated. “To be recognized as the best tax professional among top students in Egypt is an achievement,” he said. “This means a lot to me, as I always strive to be the best in anything I do, especially my academic studies. Winning this prize demonstrates that my hard work is paying off.”

Dahawy earned a trophy and will be traveling to the Netherlands to compete in the final phase of the competition. “EY is very generous with its awards and with all participants,” he said. “I’m excited to compete on a global level and honored to represent the Middle East, North Africa and West Asia regions.”

For two days, 35 students from seven universities in Egypt were assessed on their tax technical knowledge and presentation skills. During the first round, EY tax managers and senior tax consultants lectured students about the tax system in Egypt, concentrating on topics such as corporate taxes, salary taxes, indirect taxes and withholding taxes. The second day of the contest involved an assessment exam that measured the students’ technical and cognitive abilities. Based on the results, the top 10 high-scoring students were required to prepare a presentation on their analysis, demonstrating their ability to think as investors and analyze the role of taxation in Egypt.

Competitions like YTPY not only afford students the opportunity to gain communication skills and knowledge about today’s business environment, but also give them the chance to meet prominent figures in the field. “I met with managers from several different departments at EY and attended seminars from professionals who have been working in the field for more than 20 years,” said Dahawy. “They imparted a lot of wisdom that I wouldn’t have gained unless I’d been working in the field for decades.”

For AboGazia, the competition broadened her perspective about taxation and allowed her to develop professional skills. “The competition expanded my abilities to solve financial cases, deliver quality presentations and work under pressure,” she said. “I would encourage AUC students to participate because it’s beneficial in so many ways. They’ll learn about the current tax situation in Egypt and its implications on the business environment.”

AboGazia, who will graduate next spring and is the business administration senator for AUC’s Student Senate, received a cash prize for being first runner-up. “I’m very proud of my performance and astonished at the fact that I was even nominated by Professor Khaled Samaha to participate,” she declared.

Emphasizing that competitions offer so much more than just testing skills in a competitive environment, Dahawy noted, “These types of events are an opportunity to learn, make friends, discover your weaknesses and meet social figures in the business world. It’s interesting how you’ll surprise yourself with what you can achieve when put to the test, and you'll never find out unless you take part in challenging situations.”