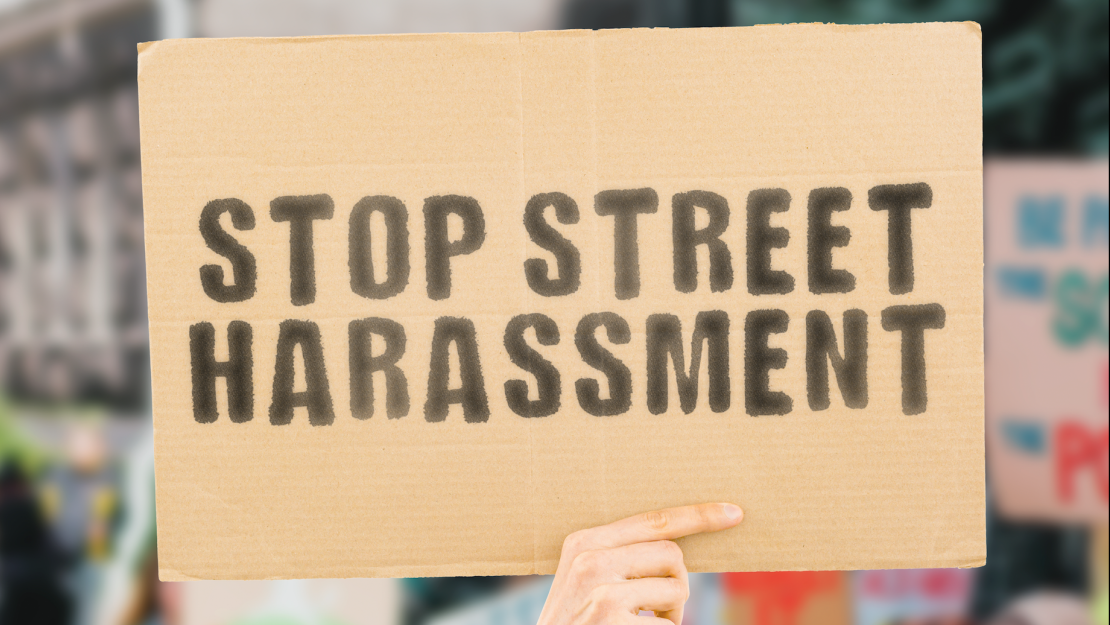 In a survey conducted by UN Women, more than 99% of Egyptian women and girls surveyed said that they had experienced some type of sexual harassment during their lifetime. Today, multiple national initiatives and campaigns have been initiated as part of awareness-raising efforts, and students of Bahia Shehab (MA '09), professor of practice in design and founder of the graphic design program, have recently joined the cause.

In their Advertising and Branding course, students were asked to conceptualize and create a 30-second radio ad on one of four topics: sexual harassment, protection of the environment, worker’s rights or street children.

“Our course focuses on communication as a tool for social change, so all of our briefs in the course help students understand advertising not only from a commercial perspective but from also a social one,” said Shehab. “Students are encouraged to think of different challenges we are facing as a community and try and create communication solutions that address that.”

Five female students took on the topic of sexual harassment, creating radio ads tackling a range of different scenarios relating to the issue. We spoke to the students to get their insights on their projects and what they aim to convey.

In her radio ad, Salma Zidan, graphic design junior, focuses on the objectification of women and their sexualization on public streets and in Egyptian culture at large. Titled “Mara Wahed Al 3alaya… (Once, Someone Called Me A...), the ad features many women narrating the different objects they’ve been referred as, including a box of matches, pudding, a cat and more, concluding with a message that such objectification isn’t descriptive, cute, funny, flirty or whatever men might think it is.

“I chose this topic because it really hits close to home, and it’s something that’s always bothered me and bothers almost all women,” reflected Zidan. “I hope that it both makes women feel heard and validates their annoyance and anger as well as reaches men and informs them how we will no longer accept this.”

"Unsafe on the Streets"

Verbal sexual harassment and its normalization are what Habiba Abouseif, graphic design and integrated marketing communication junior, chose to embark on through her project. “Nowadays, it's very normalized to do this with the excuse that ‘it's not physical' or ‘we didn't touch you’ and, therefore, they feel it's okay, which is very appalling and inappropriate,” she said.

In the middle of the rise of sexual harassment cases in Egypt, Abouseif felt that not many have been discussing verbal harassment, despite its very strong effect on women, which, in many cases, can be the same as physical sexual harassment. In her ad, she presents real-life examples of phrases women often hear on the streets by men, mixed with voices of girls sharing their comments and perceptions of the experience.

“I wanted to showcase how this makes girls feel – that we don’t feel ‘happy’ or ‘flattered’ when we hear such phrases. People really belittle its effect on us,” she asserted. “I want this to reach many people and to teach them that it isn't okay, that there should be a limit, that it shouldn't be normalized to harass girls in any form or way, and that it really affects their lives negatively.”

Addressing what stops many women from speaking up about their sexual harassment experiences, Nariman Alaswad, graphic design junior, discusses victim-blaming in her radio ad. Her project features a man speaking about how women are frequently blamed for the way they dress and whether they’re veiled or not when that’s not the reason harassment happens. He talks about how harassers can abuse anyone, even men like them. “I specifically chose a man to do this ad because I wanted the ad to be engaging and heard by men. I wanted it to be a sort of a conversation from a man to the other men,” she said.

“I wanted to point that out because of people's reactions and the blame that they put on the girl. Girls are too afraid to speak up about what is happening to them. The reason I chose it is that now sexual harassment happens a lot, and girls started to have some courage to talk about it, and the ads are mainly empowering women to speak up, but what I want is to talk to the people who go against these girls,” said Alaswad.

“I want them to stand behind these girls when they speak up about their incidents instead of blaming them. I wanted to show society how they are very judgmental and always against women. I really want these words to be heard because I believe that it can result in a change. Someone may change the way they think after listening to this ad. Even a minor change would be helpful,” she said.

"It's Everywhere, Every Day, On All Sides"

Pursuing a unique take on the matter, Jessica Gamil, graphic design senior, decided to opt for a rap song in her radio ad. In her project, she stresses the fact that harassment doesn't only happen everywhere but also to all the different body parts, focusing on public transportation, streets, and even workplaces and highlighting its different forms, like staring, catcalling or touching. What's more, she discusses the idea that harassment can be from families in the form of neglect.

"I also wanted to highlight that culture has an important role in supporting this kind of harassment," said Gamil, referring to victim-blaming statements like "it's because you're a woman," that, in a way, encourage the harasser's behavior. "I want to highlight that men literally harrass everyone, including those wearing face veils and even young girls, so there is no blame on our way of dressing or talking."

Last but not least, Gamil intentionally uses a powerful and fearless tone during the ad to convey strength and encourage women to speak up without fear. She argues that if women were to be blamed for anything, it would be for not speaking up when such uninvited acts of harassment occur because if they did, sexual harassment would no longer be tolerated and men would be afraid of women coming forward with their experiences.

It’s not uncommon for sexual harassment awareness campaigns to be conducted through different media forms, but radio ads are quite a unique take on methodology.

When asked about the choice of radio ads, in particular, Shehab said, “Our design students work mostly with visual data so engaging them in a brief where there are no visuals, only pure concepts where they have to create with words and sound is always an interesting exercise to witness. It pushes them out of their comfort zone and forces them to use new tools that they have not used before. I'm very proud of their contributions and very happy that they will be shared with our AUC community.”