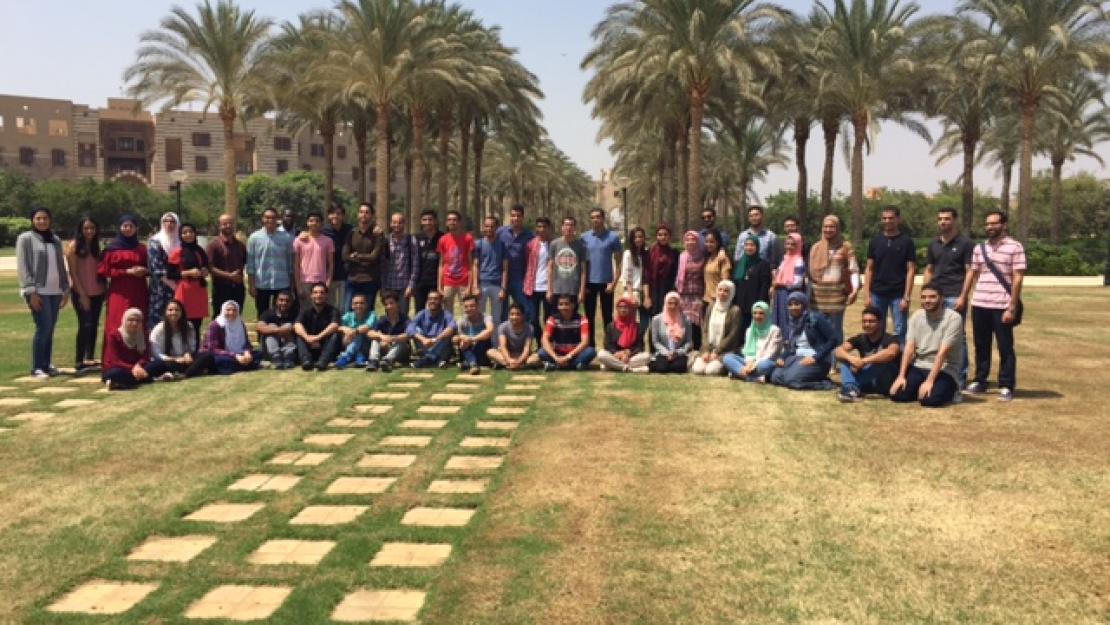 The full group of 2017/2018 Al-Ghurair Scholars.
By
Elizabeth Lepro

When war broke out in Yemen in 2015, Mohammed Al-Sabri’s family stayed at their home in Taiz city for as long as possible.

Within the year, they –– along with more than 11 percent of the population –– had been forced out due to constant airstrikes and violence. Al-Sabri had been studying English in Sana’a, Yemen’s capital, before having to help his family move to a village on the outskirts of the city. There, he went to work teaching English –– Al-Sabri’s father is unable to work since he recently suffered a heart attack. His plans for pursuing further education were washed out by the difficulties local universities faced in paying professors and blocked access between cities.

“This is not the situation I wanted to be in; no, this is not the plan I wrote two years ago,” Al-Sabri said of his thought process during that time. “But I know it’s not my mistake. It’s war. And being alive during war is an achievement, believe me.”

Al-Sabri doesn’t want to dwell on the hardships he or other Yemenis have faced. He wants to find solutions. An ardent believer in the power of education and a stellar student, he considers learning the best way to help his country and his family, so he spent any free time he had looking for scholastic aid and opportunities. Then, he found the Al Ghurair STEM Scholars Program at AUC.

Scholarships: ‘A Passport in Life’

Al-Sabri learned he had received a scholarship award from the Abdulla Al Ghurair Foundation for Education in August 2017. By August, he joined more than 53 other Al Ghurair STEM Scholars –– graduates and undergraduates –– on AUC’s campus for the Fall 2017 semester.

The Al Ghurair STEM Scholars Program offers scholarships to underserved students at accredited partner universities across the Arab region, United States and Canada, with funding from the Abdulla Al Ghurair Foundation for Education, one of the largest privately funded philanthropic education initiatives in the world. AUC is among the leading universities in the region with which the foundation partners, including the American University of Beirut and American University of Sharjah.

Launched in July 2015, with a $1.1 billion investment and the aim of reaching at least 15,000 Arab youth over the next 10 years, the Al Ghurair STEM Scholars Program equips students with the knowledge and skills they need to eventually have an impact in the region. This is the second year the program has placed students at AUC. Last year, 33 Al Ghurair STEM Scholars joined AUC.

“This scholarship has been a dream, getting a chance to travel outside of Yemen to receive a proper education,” Al-Sabri said. “Getting a scholarship, what can I say, it’s like a passport in my life. I can never thank the foundation enough. Never.”

Now a mechanical engineering major at AUC, Al-Sabri’s goal is to develop a way to generate energy from friction. One day, he would like to use this method to power hospitals in Yemen, where health centers are the frequent targets of devastating airstrikes. “I lost two of my family members because they were sick and the hospitals weren’t available during the war,” Al-Sabri said. The United Nations estimates that more than 10,000 Yemeni people have died since the start of the conflict, and this doesn’t include tallies from hospitals and health centers, where statistics are hard to pin down.

Though Al-Sabri’s studies may be rooted in his plans to develop a free, international power-generating system, his heart is in education. “People are living in hard times, especially in places like Syria, like Iraq, like Yemen. Many smart students can’t pursue their education, and this really hurts me,” Al-Sabri said. “This is one aspect I really want to fix, if I have the power, because education plays the most crucial role in any society. Teaching is a message, I believe, and by this message you could serve a whole nation.”

Before he can do any of this, though, Al-Sabri knows he has to learn the basics. That process begins at AUC. “These worries are reflected through hard work,” he said. “You spend more and more time on upward development so that you can compensate people for the hard times they are living in. Once you reach the height where you are in a position to pay attention to those you left, offer them a supporting hand. As you were, they are now. As you are now, help them be.”

Today, Al-Sabri can be found studying on campus, visiting with local Yemeni families –– whom he says make him feel at home –– or playing soccer with friends.

When Manar El-Naggar found out she would be an Al Ghurair STEM Scholar, she was thrilled, hugging her mom and thanking God in a flurry of excitement. But when she started looking for a graduate program affiliated with the Al Ghurair STEM Scholars Program, she wasn’t sure at first if AUC would offer the field she wanted –– but soon changed her mind.

“As a medical student from a pharmaceutical background, I was a little bit concerned about pursuing my postgraduate studies at AUC because I thought the direction would be more toward environmental studies and energy and water treatment,” El-Naggar said. “But in the interview, when I asked my professors about this, they told me that I can direct the research in the way I want and that a lot of professors are working in the biotechnology and medical fields.”

In fact, cancer research and biotechnology are scientific staples at AUC –– among the many other ways the University aids in the fight against cancer. El-Naggar’s specific interest, nanotechnology, is at the forefront of cancer research at AUC. The Alexandria native quickly changed her opinion and opted for AUC, where she is finding new ways to battle cancer or immunological diseases.

“I don’t want to repeat the drug delivery experience because I was already doing it during my undergraduate studies, so I want to go for something much more complicated like tissue engineering,” she said. This method involves a process of combining cells on nanoporous scaffold biomaterials –– foam, mesh or other fibers, for example –– to repair damaged tissues and guide the growth of new ones. It’s not a common field of study in Egypt, according to El-Naggar. “Cancer is a hot research area in Egypt, but using nanotechnology is the novelty in the cancer area that we are working on. In research, everything you do should be novel –– what you’re going to introduce, the new piece you will add.

During her undergraduate studies, El-Naggar formulated nanoparticles to target cancer in the liver. She’s still traveling back to Alexandria on the weekends to work on this research and plans to have her findings published within the next year. “I chose the medical field because I feel that people really suffer in terms of health, and I want to help them,” she said. “I want to provide them with new solutions that can help them live a better life.”

Between classes, you can find El-Naggar exploring campus, organizing events for the Graduate Student Association and, of course, testing her formulas in the lab.

A few Al Ghurair STEM Scholars on campus this year have been preparing for a life in STEM fields since grade school.

First-year undergraduates Dareen Hussein and Ali Mohamed Ghazal both graduated from STEM high schools in Maadi and the 6th of October, respectively.

Ghazal, an Alexandria native, has dreams of becoming a world-class innovator. With the floatation of the Egyptian pound, he was afraid he wouldn’t be able to attend a university up to par with his high school studies. Then Ghazal found out that he could apply for the Al Ghurair STEM Scholars Program and get an American-accredited education close to home.

“I love to believe in this historic philosophy that we should only focus on the things we can control,” Ghazal said. “I made every possible effort to win this chance and stand out through the application.”

With dreams of becoming the next Mark Zuckerberg or Elon Musk, Ghazal is interested in artificial intelligence and robotics as a way to “reimagine the Arab community” when it comes to infrastructure, internet access and education. Both he and Hussein are familiar with the problems that Egypt is facing. In high school, they were required to come up with innovative solutions to five of the region’s biggest problems, including clean water and overpopulation.

Hussein found her inspiration in AUC’s FabLab –– the Arab world’s first university FabLab. Handling projects and using the machines is actually something I like,” the mechanical engineering major said. AUC opened its first FabLab this year, and Hussein is looking forward to using it to complete projects for her mechanical engineering classes.

Remembering an inspiring speech from one of the First-Year Experience mentors at the beginning of the year, Hussein sees herself one day becoming an adviser for aspiring scientists. “I look forward to having my own FabLab one day because I really enjoy mentoring others,” she said.

Outside of class, you can find Hussein practicing piano with the Musicana club or taking photos for The Insider. If Ghazal isn’t meeting with other mashroo3 kheir AUC or CIMUN club members, he might be on the soccer field.