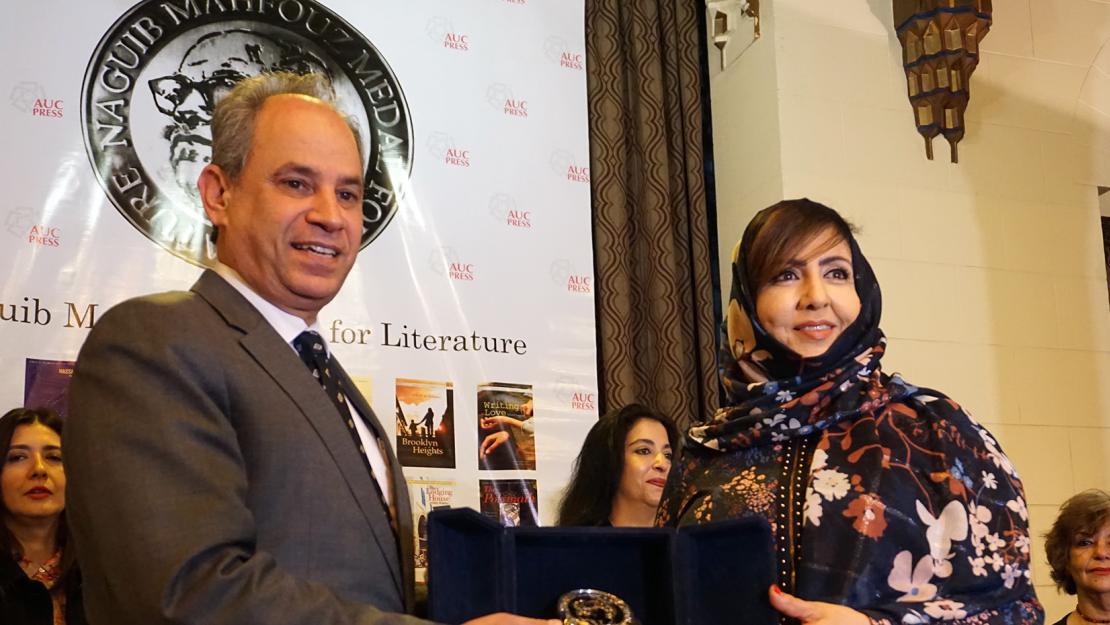 Saudi Arabian writer Omaima Al-Khamis received the 2018 Naguib Mahfouz Medal for Literature, established by AUC Press, for her novel, Masra al-Gharaniq fi Mudun al-‘Aqiq (Voyage of the Cranes in the Cities of Agate).

The award was presented by AUC Provost Ehab Abdel-Rahman and decided by the members of the Award Committee: Tahia Abdel Nasser, associate professor and director of graduate studies; Shereen Abouelnaga, adjunct faculty of the Department of Arab and Islamic Civilizations; Mona Tolba; Humphrey Davies, one of the foremost contemporary Arabic-English literary translators; and Rasheed El-Enany, emeritus professor of modern Arabic literature, University of Exeter.

In their citation for the award, the judges described Masra al-Gharaniq fi Mudun al-Aqiq as “a serious novel that speaks to our time through history. It takes the form of a journey from Arabia northwards and westwards to Andalusia, through the great cities of the Arab world in the 11th century during the titular rule of the weakened Abbasids in Baghdad, the Fatimids in Cairo, and the warring factions of Islamic rule in Spain. ... Omaima Al-Khamis has succeeded in capturing the essence of cultural and religious diversity in the Arab world between 402 and 405 Hijri. For the Western reader, the clearly presented controversies over issues such as the acceptance or rejection of rationalism will bring to mind much that is familiar in his or her own history.”

In her emotional acceptance address, Omaima Al-Khamis began by paying tribute to Naguib Mahfouz, “our great writer who taught us the magic and craft of the story.”

She thanked her parents for shaping her consciousness. “The book was a staple of our house,” said Al-Khamis, reminiscing about the piles of books that surrounded her when she was growing up. “At the beginning I was enamored with language, and perhaps it was my luck to be born with letters and words around me.”

The award ceremony took place on December 11 at AUC’s Oriental Hall in the Tahrir Square Campus and was attended by many prominent figures and writers.

The American University in Cairo Press established the Naguib Mahfouz Medal for Literature in 1996. It has been the primary publisher of Naguib Mahfouz’s English-language editions for more than 30 years and has also been responsible for the publication of some 600 foreign-language editions of the Nobel laureate’s works in more than 40 languages around the world since the author won the Nobel Prize for Literature in 1988.

With some 50 new publications annually and more than 800 titles in print, AUC Press is recognized as the region’s leading English-language publisher.