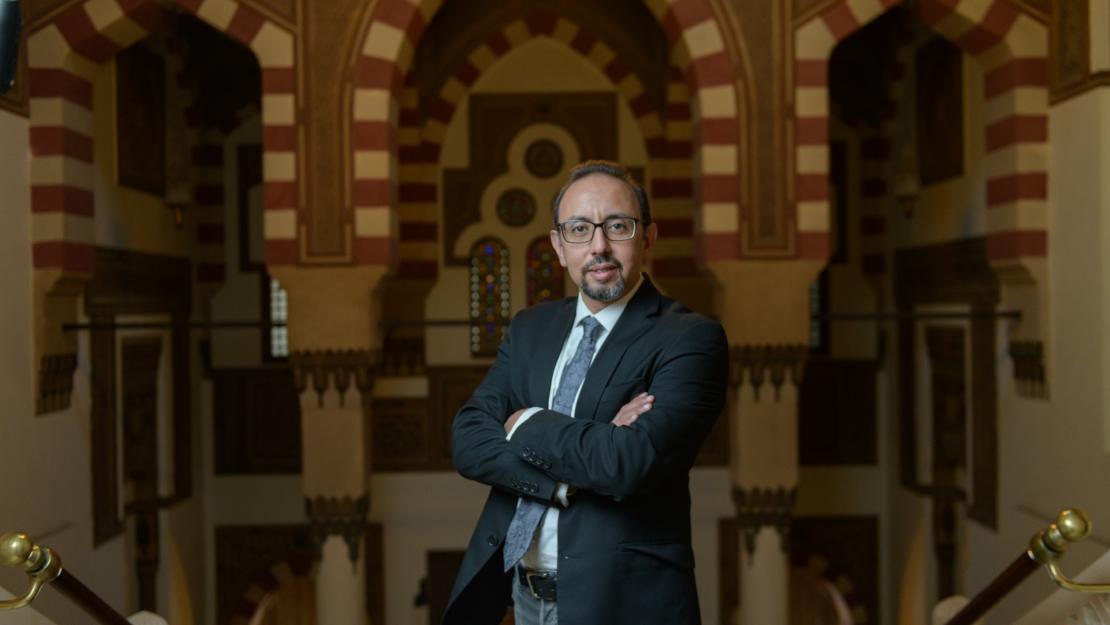 Tarek Atia (SAB '90) came to AUC 30 years ago as an exchange student for a semester abroad at AUC Tahrir Square. Now he's back to AUC as the managing director of Tahrir Cultural Center (TCC) and Campus. "AUC was one of the things which drew me back to Egypt like a magnet." Learn more about Atia's vision for the Tahrir Cultural Center and his plan to make it "the coolest place in downtown Cairo." #PeopleOfAUC

How would you describe the TCC in a few words?

It’s the hub of intellectual activity and fun. It’s a great place to hang out, learn and meet people. Hopefully, it’s going to be the coolest place in downtown Cairo.

What is your vision for the TCC?

My vision is to work with as many stakeholders inside and outside the University on really making [the experience of] everyone who comes here, whether to study or enjoy some art, [one where they] truly learn, benefit and have a nice time. I want them to remember it, want to come back and consider it their second home.

What will be your main focus/priorities this year?

The main focus this year is to build a strong team that can really achieve those goals, and part of that is having enough resources to be able to benefit from everything that AUC has to offer. We hope that the TCC will land itself on the global cultural map by the end of this year through wide-scale exhibitions and events that are not just about filling the holes with activities, but will also touch on really important things in people’s lives —- ideas, emotions and concepts. That is the goal of any cultural center or artistic enterprise. In a year, the TCC should be very well-known as a landmark in Cairene culture — regionally and globally.

My connection with AUC started 30 years ago when I came here as an exchange student for a semester abroad in AUC Tahrir Square. I grew up in the United States, went to college there and worked there for a while, and my semester at AUC was one of the things which drew me back to Egypt like a magnet. It changed my life.

AUC is a treasure trove of humanity, people, knowledge and networks of things. You either see something at the surface that you love, or you dig a little bit deeper to find even more incredible resources. That only comes from a University that has a long history. There is a reason why things that get older have that kind of feeling; they’ve had time to develop so many interesting stories. I felt it during my exchange semester years ago, and I still feel it until now. I’m always discovering new treasures related to AUC, research, books, activities, people. It’s an endless treasure chest for me.

What should we expect this coming year at the TCC?

We are thinking of enhancing usage of the Historic Palace at AUC Tahrir Square. We’re working on a new concept called “Palace Walks and Palace Talks,” where people come in once a week on organized tours that tell the story of this palace and show its fantastic history. This would be accompanied by palace talks, which is conceptually similar to TEDx talks, but even more visually impressive, as we have amazing audiovisual equipment in AUC Tahrir Square. It’d be people exploring really cool, new ideas related to technology, history, society and more. Basically, we are trying to create rituals here, from a show that finds its home here to regular lectures and talks, in addition to the ongoing events.

What do you think is the importance of the TCC for AUC? For Egypt?

For AUC, it’s important to revive its presence downtown. I don’t think AUC ever left downtown Cairo, as the School of Continuing Education has always been here, bringing in over 20,000 students each year.

I think so much more can be done in downtown, and TCC will be the driver of that — the engine that propels AUC’s presence downtown. It’ll also bring more learning spaces, more opportunities for performances and lectures for different audiences. We’re trying to create a bridge between the two campuses, which I think is very important. I hope the TCC can bring that kind of high-level intellectual and artistic activity to a place that is hungry for it.

What’s the next phase of the TCC renovation?

The cafeteria, which launched in September 2019, is the crowning jewel of the TCC’s renovation, landscaping and refurbishment phase. I believe that the cafeteria is a brilliant example of the adaptive reuse of a heritage building. It’s taking a building that has a historical value and repurposing it while maintaining its value and even enhancing it by giving it a modern functional use. That’s the story of the TCC.

The next phase is to look at what the University needs and what the TCC really wants to do with the rest of the Historic Palace at AUC Tahrir Square. We’ll bring in experts in the adaptive reuse of heritage buildings, which is a very specialized skill set. We need to create more spaces for medium-sized conferences, other than Oriental Hall and Ewart Memorial Hall. The next big idea is pursuing this idea of taking a holistic look at the Palace as a whole and exploring new ideas to reuse it for various academic and artistic purposes.

What are your short-term and long-term goals for the TCC?

Our short-term goal is to make sure that people are aware that we are here and we have things going on. We’re trying to do as many things as we can with our small team, tapping into the University’s resources to help us out. We want everyone to know that there’s always something to see at AUC.

The long-term goal is to be the shining light for Egypt and the world, attracting a ton of interest to get more funding for programming and philanthropy for the arts, which is becoming a big deal worldwide. A great example of this is the generous gift by Naguib Sawiris to renovate the TCC. We think there are even more people in Egypt and around the world who’d like to contribute to the arts, whether by sponsoring events or even preserving heritage, like our future project to host a retrospective work of the famous Screenwriter Ihsan Abdul Kodous.

Favorite music: I am eclectic. I like REM, the 80s and 90s pop songs, everything from classical and traditional Arabic music to modern Arabic pop and rap. And classical music too.

Your hero/role model: My parents

Accomplishment you’re most proud of: Bringing up two wonderful sons who are now in college

Fun fact about you: I am older than I look.

What problem do you wish to solve in the world? I’d love to give value to intangible things that people give no value to.