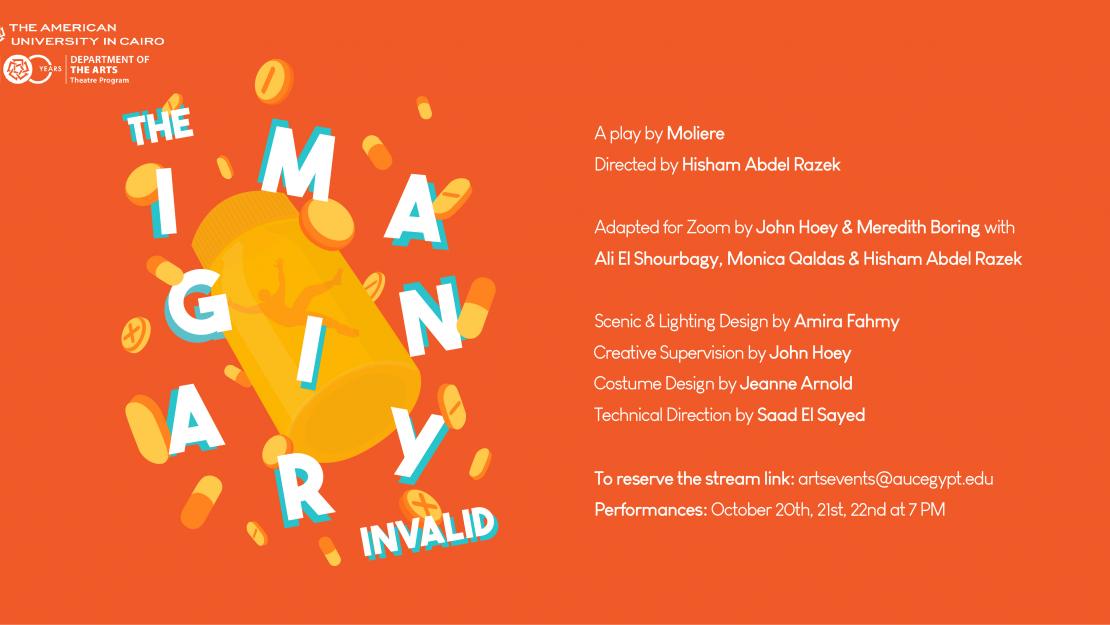 On October 20, 21 and 22, a brand new adaptation of Moliere’s The Imaginary Invalid will be streamed live via Zoom to kick off AUC Theatre’s Fall 2020 season.

Modernized and adapted for this new theatrical format, the play tells the story of an old hypochondriac – someone who falsely believes to have an abundance of illnesses – who insists on marrying his daughter to the son of a doctor, in order to receive free treatment for his non-existent diseases. Her desire to marry someone else, coupled with an extremely cunning and witty maid by her side, leads to a series of random, bizarre and absurd events unfolding as all 12 characters embark on a comic quest for love, happiness and peace of mind. All this, in addition to three of the 12 characters being turned into puppets, promises for a theatrical experience like nothing AUC audiences have ever seen before.

AUC Mechanical Engineering and Theatre alumnus Hisham Abdel Razek '19 returns for his directorial debut, having assistant-directed AUC’s Spring 2020 production of Noura by Heather Raffo. He is also part of the team that adapted the script, led by John Hoey, associate professor of practice in the Department of the Arts, Meredith Boring, and AUC Theatre alumni Ali El Shorbagy and Monica Qaldas '20.

Ali also stars as Argan, the play’s hypochondriac, along with a cast of AUC students of mixed backgrounds and majors. These include Heidi Aref, Nour Ibrahim, Menna Walid, Youssef El Ghannam, Loulwa Dora, Sara Hassan, Yehia Abdelghany, and Raafat El-Saeed. Amira Fahmy plays a jack of all trades in this production, as she is the scenic, lighting, props, and virtual background designer. John Hoey supervises all technical aspects with regard to using Zoom for theatrical purposes, while Jeanne Arnold is the costume designer and Nadine Abaza is AUC’s first ever Zoom stage manager.

Zoom link to be provided upon booking