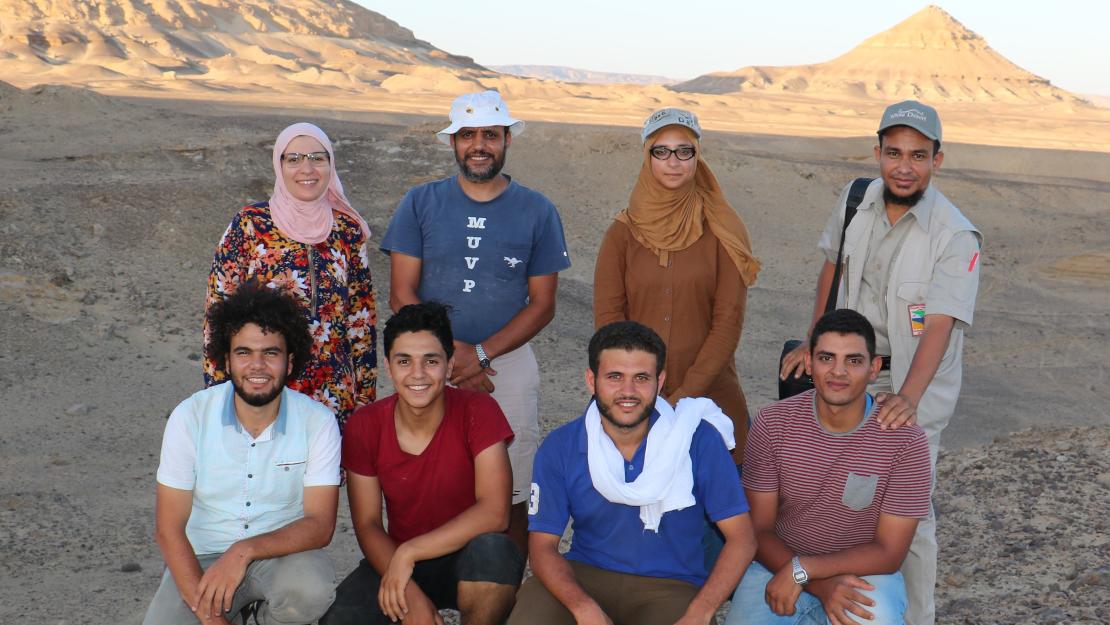 Sallam and team at the Bahariya Oasis, 2018

Hesham Sallam, associate professor at AUC’s Institute of Global Health and Human Ecology in the School of Sciences and Engineering and founder of Mansoura University’s Vertebrate Paleontology Center (MUVP), led an Egyptian team’s discovery of a new kind of large-bodied meat-eating dinosaur, or theropod, from a celebrated fossil site in the Sahara Desert of Egypt - revealing important secrets about the Prehistoric Era in the region.

A  paper describing the discovery was published today in the scientific journal  Royal Society Open Science. The study, led by Belal Salem of MUVP and graduate student at Ohio University, is the result of a collaboration between international researchers.

The new fossil is a very well-preserved vertebra, or backbone, from the base of the neck of a theropod. It was recovered by a 2016 MUVP expedition to the Bahariya Oasis of the Western Desert of Egypt.

The Bahariya Oasis has always been known for its rich fossils and the discovery of the most famous dinosaurs in the world. “However, the vertebra described in the new paper belongs to an abelisaurid, a kind of bulldog-faced, short-armed theropod that had not been discovered in the oasis before and that is estimated to have been roughly six meters (20 feet) in body length,” said Salem.

“About 98 million years ago, the Bahariya Oasis was not known by this name. Rather, it was the ‘Dinosaur Oasis’ in every sense of the word,” Sallam described. “It was an oasis teeming with life, in which bloody fights prevailed between different animals and moreover dinosaurs. The dinosaurs lived along the banks of the oasis, by an ancient river known as the ‘Giant River’ — where one of the largest carnivorous and also herbivorous dinosaurs lived.”

The oasis is renowned within paleontological circles for having yielded the type specimens (the original, first-discovered, name-bearing fossils) of several extraordinary dinosaurs during the early 20th century, including, most famously, Spinosaurus. Unfortunately, all Bahariya dinosaur fossils collected prior to World War II were destroyed during an Allied bombing of Munich in 1944.

Renewed interest and recent expeditions to the Bahariya Oasis led by researchers from AUC and MUVP have discovered new fossils from this classic site, helping to restore its paleontological legacy and adding additional species to its already rich fossil fauna.

Joining Sallam in the study are Patrick O’Connor, professor of biomedical sciences at Ohio University; Matt Lamanna, associate curator of vertebrate paleontology at the Carnegie Museum of Natural History (CMNH); Sanaa El-Sayed, a doctoral student at the University of Michigan and the MUVP’s former vice director; colleagues from Benha University, Egypt and the Egyptian Environmental Affairs Agency. CMNH Vertebrate Paleontology Scientific Illustrator Andrew McAfee produced or assisted with most of the illustrations for the paper.

“More than two decades ago, when my collaborators and I started searching for dinosaurs in the Bahariya Oasis, we dreamed of the day when a homegrown Egyptian paleontological research group would continue our work. Thanks to Hesham, Sanaa, Belal, and others at MUVP, that day has finally come,” said Lamanna.

O’Connor said: “Identifying definitive abelisaurid from Bahariya is very exciting for Egypt and MUVP, as this group of predatory dinosaurs continues to tell us a lot about vertebrate communities during the Cretaceous Period, and in particular, how Gondwanan ecosystems were assembled and maintained for a large part of Earth history during the final period of the Mesozoic Era.”

Abelisaurids—most notably represented by the demonic-looking Carnotaurus from Patagonia of Jurassic World fame—were among the most diverse and geographically widespread large predatory dinosaurs in Europe and the Southern Hemisphere continents during the later stages of the Mesozoic Era, or Age of Dinosaurs.

The unnamed abelisaurid represented by the new vertebra, alongside Spinosaurus and two other giant theropods (Carcharodontosaurus and Bahariasaurus), adds yet another species to the cadre of large predatory dinosaurs that roamed what’s now the Egyptian Sahara during the middle of the Cretaceous Period.

Dinosaurs from the very end of the Cretaceous, shortly before the devastating asteroid impact that closed the curtain on the Mesozoic Era 66 million years ago, are vanishingly rare on the entire African continent, yet fossil-bearing rocks exposed in other Western Desert oases are beginning to reveal their secrets.

“In terms of Egyptian dinosaurs, we’ve really just scratched the surface,” concludes Sallam. “Who knows what else might be out there?”