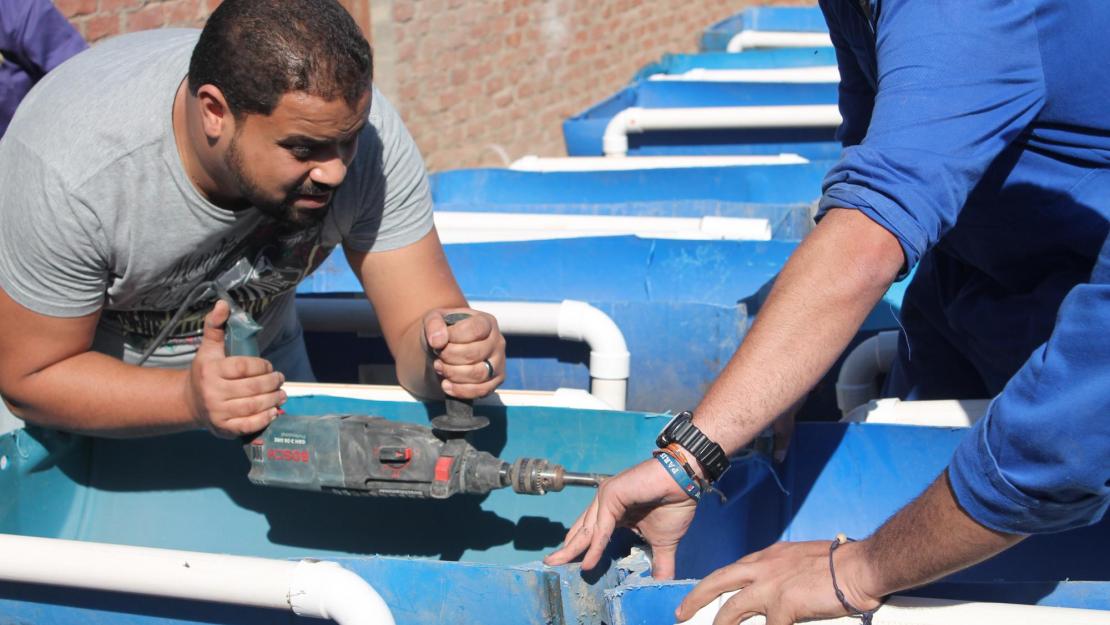 A group of volunteers from Egypt and the United Arab Emirates were still waking up as they settled onto couches in a downtown Cairo office on a Wednesday morning in late November.

The group was preparing to head to Fa

youm for a four-day volunteering trip as part of the Research Institute for a Sustainable Environment’s (RISE) Food for the Future program. “Everyone in my office signed up to come,” said a volunteer, smiling because he was one of the few chosen.

Fun as it may be to escape the office for a weekend, the program was not a vacation. The trip would have tangible results, including a solar-powered chicken incubator installed in a family’s home in the village and a self-sustaining rooftop garden in the city.

RISE works on sustainable environmental planning and research in North Africa and the Middle East. Since 2011, RISE, in partnership with a banking corporation, has been developing water filtration and educational programs in the Western Desert as well as waste management and rooftop gardening initiatives throughout Egypt. The Food for the Future program is the institute's most recent initiative, with a tough objective in a country where overcrowding, inflation and high unemployment and poverty rates have led to substantial food insecurity.

“When you go to the supermarket and buy food for lunch and dinner, you think that you’re secure because you always have food, right?” said Amira Khalil, RISE assistant director of Community Engagement. "Wrong," she said.

“Food security is that all people, all the time have economic and equal access to food and that this food is available.”

Food for the Future’s most novel initiative has resulted in the installation of six solar-powered chicken incubators in villages around Fayoum, an agricultural part of Egypt where there are high rates of rural poverty. The incubators do more than just provide chicks for certain families, explained Salma Mostafa, the RISE researcher in charge of the incubator project.

“Another objective of this project is women’s empowerment,” Mostafa said. “In Egypt, we find that women in rural areas face many difficulties in accessing the main productive assets, like the land, and for most of them, it’s hard to work outside of their houses. This project is also an income-generating opportunity for their neighbors because now they can find a chick source in their neighborhood.”

After a few hours on the bus Wednesday, the scenery started to change. Cairo’s busy roadways lined with stacked-up apartment buildings gave way to grassy plots of vegetation where farmers transported wagon-fulls of plants along surrounding dirt roads.

When they arrived at a narrow, three-floor brick home in the village, volunteers split into groups – one to install the solar panels on the family’s roof, one to install wiring and another to explain to the family how to adjust the incubator’s temperature and humidity as well as fill the water tank on its side. The woman who lives in the building and will be operating the machine has six children, some of whom weaved through and around the adults’ feet, watching intently as the machine -- shaped like a squat refrigerator -- was installed.

The idea of a chicken incu

bator is not new to Fayoum, as it was actually home to some of the first incubators in history, according to Mostafa. “It was a very big building with a lot of small rooms, operated by experts,” she said. “They moved the eggs with their hands several times every day, and they controlled the temperature by putting the eggs on their eyelids, so it was a very delicate technique.”

Today’s machines require a little less manual labor. They mimic a hen’s movements and 21-day incubation cycle, shifting the eggs -- though they can also incubate other kinds of bird eggs. Unlike a hen, however, the incubator can hold 456 eggs at once and operates year-round. Its cost means this opportunity wouldn’t be possible for the family without financial support from Food for the Future, but it's well worth the money, noted Mostafa.

“We chose solar energy because it is a solar source, so it’s never-ending,” Mostafa said. “It’s clean; it doesn't produce any waste; it’s noise-free; and maintenance is very easy… [Plus], the panels provide more electricity than the incubator needs, so it provides extra electricity for the house.”

In a presentation the next day, Charles Sendaaza, a researcher who oversees rooftop gardening for RISE, noted that Cairo has expanded immensely since the 1970s. “A lot of places coming up where people would like to stay –– for example Zamalek, Heliopolis or Maadi –– would most likely have been used for agriculture,” he said. “So what we do is go into the desert and pump a lot of chemicals and inject a lot of water there for food, which is something very unsustainable, but we need to l

Planting on Cairo and Fayoum’s flat roofs is a sustainable solution to this problem. On Thursday, the volunteers zipped themselves into royal blue jumpsuits and began assembling PVC-pipe stands on a roof in downtown Fayoum. The stands hold plastic barrels sawed in half, which are then filled with soil and planted with lettuce, spinach and broccoli.

The gardens are planned meticulously: tubing that runs through the end of the barrels and is connected to a spigot waters the plants regularly so that no one has to do it by hand, and rocks on top of netting filter the water from the soil as it drains out of the tubs.

By the afternoon -- after about four hours of hard work -- the whole roof had been transformed and the volunteers left noticeably tired. The final two days of the trip included tending to a sustainable garden -- on the ground this time -- and offering feedback on their work.

In two weeks, researchers and more volunteers will head out to install another chicken incubator and more gardens. The project is simple, effective and hands-on, working little by little to offer sustainability to Egypt’s outskirts. “It’s all about producing more per drop of water, saving our resources and producing food security,” Khalil said. To put it simply, “We’re trying to provide better lives for people.”