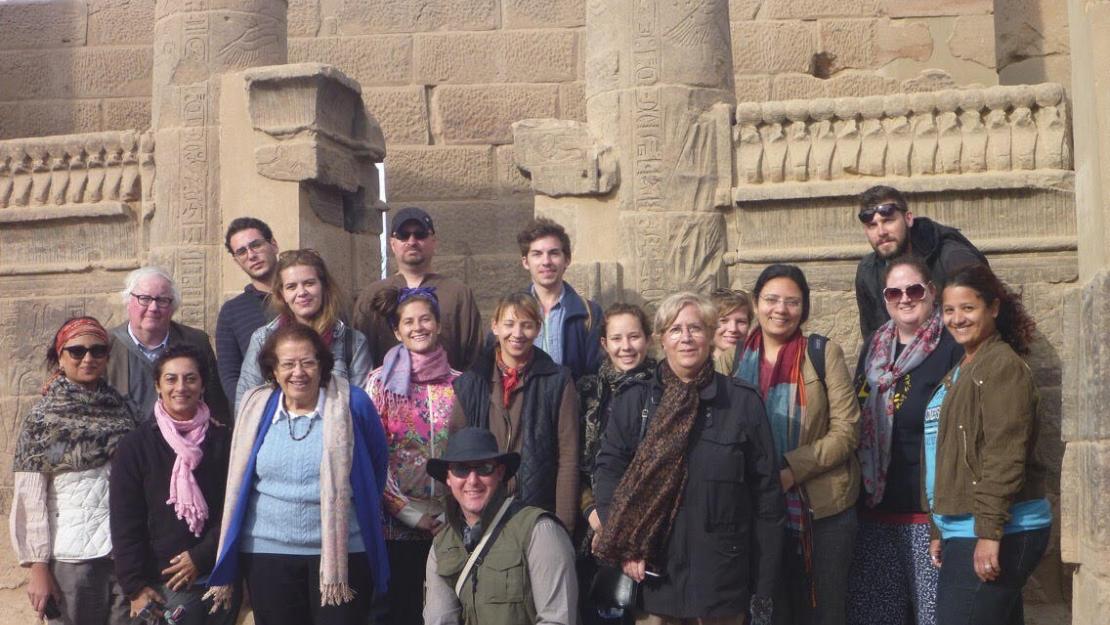 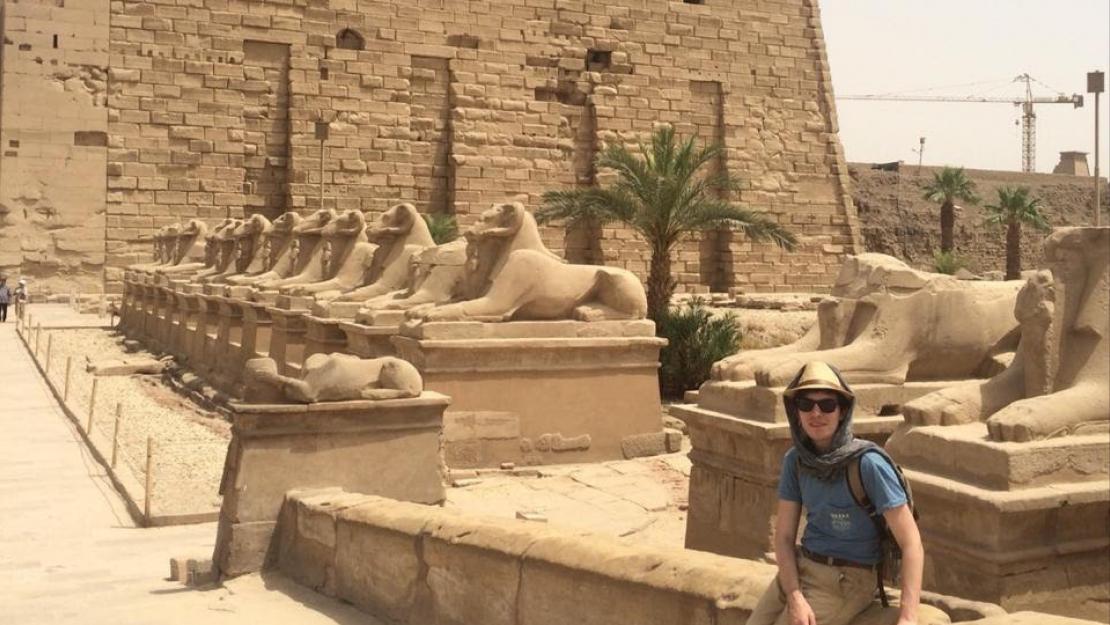 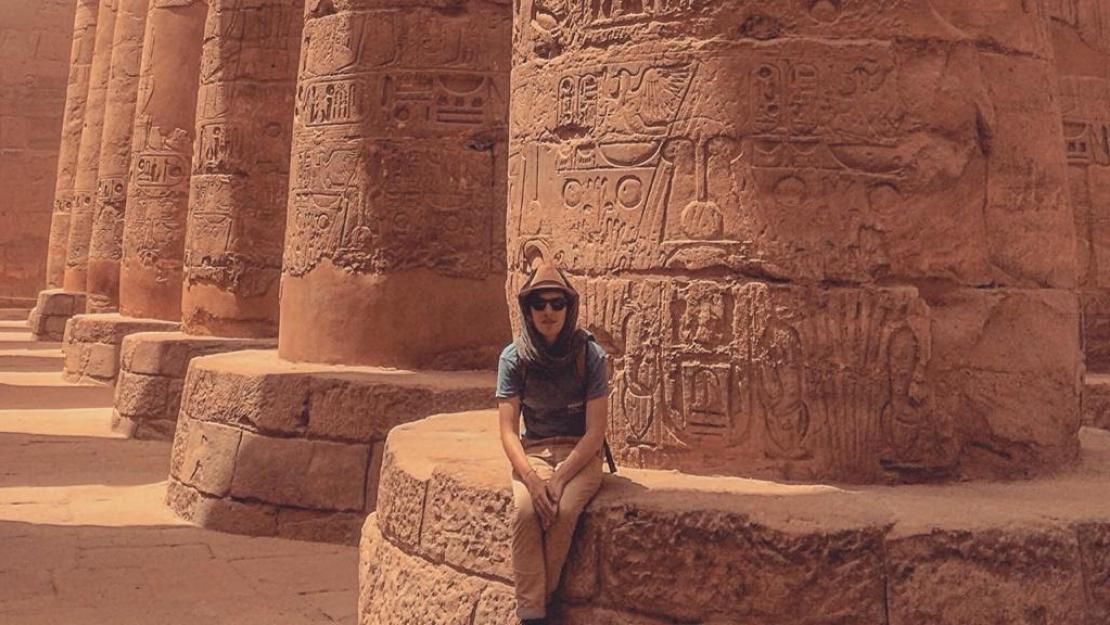 Historically and until today, AUC has served as a popular destination for international students interested in learning Arabic, studying Egypt’s long and diverse history, or just looking for an adventure. One of AUC’s current international students is Jayme Reichart, an American pursuing a master's in Egyptology and currently working as a teaching assistant for Lisa Sabbahy, assistant professor of Egyptology, and Fayza Haikal, professor of Egyptology.

News@AUC met with Reichart to learn what brought him to AUC, his passion for the past, his outreach through social media and his future plans.

Q: What got you interested in pursuing a master's in Egyptology at AUC?

A: I grew up in Buffalo, New York, and I had a fascination with the ancient world from a very young age. My friends and family have often told me that I’m an old soul. It started out with the ancient Mediterranean because I loved to read books on Egyptian, Greek and Roman mythology. My parents and grandparents often took me, with my sisters and cousins, to museums. By far, one of my favorites was the Royal Ontario Museum’s Egyptian collection. I knew by sixth grade that I wanted to come to study at AUC because of its location in Egypt and the opportunity to be taught by prominent Egyptologists. Beginning in middle school, I molded my studies to fit the prerequisites for the master's in Egyptology.

Q: Where did you get your bachelor's, and what did you major in?

A: I studied at Pace University in New York City’s Lower Manhattan. My major was modern languages and cultures, with a focus in French and Spanish. I was also able to fulfill two minors in art history and classical and medieval studies. I completed the first half of my major in New York and the second half in Paris, as I was granted the opportunity to study abroad at the Université de Paris IV – Sorbonne for one year.  My time in New York and Paris has had a lasting impact on my college experience. It allowed me to make friends from around the world and visit many museums, galleries, parks and monuments. Throughout my undergraduate career, I was also fortunate enough to be hired as a volunteer in the Department of Visitor Services at The Metropolitan Museum of Art. My time there allowed me to interact with museum visitors from around the globe and utilize both my language skills and art history knowledge.

Q: What is your focus within Egyptology?

A: My main interests are Egyptian art, architecture, material culture and agency. My interests began with the art of the Ptolemies, the ruling dynasty of Egypt from the 330s B.C. to the Roman conquest in 30 A.D. In terms of dynastic art, I really love the art of the late-Old Kingdom, Middle Kingdom and the Thutmosides (New Kingdom - 18th Dynasty). I also find the First Intermediate Period, a time when the Egyptian state decentralized, to be of interest, because there are provincial art forms that flourished and act as witnesses to community identity. I think it is important that Egyptian art is not seen as static and unchanging, but nuanced and evolving from the Predynastic to Graeco-Roman Period.

A: I love to attend the field trips and workshops that are organized by AUC’s Egyptology unit each semester. We have had the opportunity to visit many archaeological sites and take epigraphy lessons. The professors and the faculty in the Department of Sociology, Egyptology and Anthropoloare always very helpful and welcoming. I also love the gardens and architecture of the Tahrir and New Cairo campuses. I care very much about the environment and think the sustainable architecture on New Cairo’s campus is a good reference point for future building projects around the world. It exhibits the way that architecture and nature can be combined to create a learning and working environment that is both eco-friendly and beautiful.

Q: What is your favorite historical site in Egypt?

A: I love temple architecture, especially the cenotaphs (memorial temples) at Abydos built in Sety I and Ramesses II during the New Kingdom. The quality of preservation and color of the relief are phenomenal. The dynamism and naturalism that is achieved by the craftsmen is absolutely breathtaking! Unfortunately, we can only imagine what the temples looked like fully painted and unfragmented in antiquity. They must have been gorgeous, especially when the lamps were burnt at night. I wish I could travel back in time to see all of the monuments and cities of ancient Egypt at their zeniths, especially Memphis, Bubastis, Elephantine, Thebes and Alexandria.

Q: Who are your favorite ancient Egyptian gods or goddesses?

A: My favorite ancient Egyptian gods are Khonsu, a moon-god, and Sheshat, the goddess of writing and architecture. My grey cat Khonsusaiah is named after Khonsu. I also have a ginger and white cat Amunherkhepeshef. She is named after the god Amun-Ra and a son of Ramesses II.

Q: What work do you do as a a research assistant for The Theban Mapping Project based at AUC?

A: I am grateful for having the opportunity to work as as a graduate research assistant and linguistic consultant for almost a year at The Theban Mapping Project because I have been able to put my bachelor's and master's studies to good use. I have mostly been helping edit bibliographies and input language data into the The Theban Mapping Project’s Egyptian Archaeological Database. I typically have to research, edit and input lots of different names and bibliographies for each site. It is fascinating to witness the temporal transition of a site’s name from its ancient Egyptian, Greek, Latin and Coptic names to its Arabic, English, French and German names. This project aims to preserve as many of Egypt’s archaeological sites on the web as it can because it is important for current and future scholars and students who wish to study Egypt’s rich history.

Q: Would you encourage other Americans and international students to study abroad at AUC?

A: Yes, I would encourage Americans, Erasmus students and other international students interested in Egyptology and the Middle East to study at AUC because there is nowhere better to study these!

Q: Do you think graduate research is something students should pursue?

A: Yes, I think it is great exposure, especially for building familiarity in a profession’s authoritative works. Taking part in research when you are an undergraduate or in a master's program is also super-beneficial, especially if you ever want to pursue a PhD or independent research. Conducting research helps your writing as well. It makes you have to be more succinct and to the point.

Q: What are your goals for the future?

A: Once I have graduated from AUC, I would love to work back in museums again. When I volunteered at The Metropolitan Museum of Art and an art gallery in New York City during my undergraduate studies at Pace University, I loved the inspirational atmosphere, the work environment and engaging with the public. I've had an Egyptian art history blog on Instagram for more than two years now called @egyptologydaily where I write daily blog posts in English, French and Spanish (space permitting), with an aim to expose as many people to not only Egyptian art, but to all art in general. I think the humanities are a vital part of the human experience. In the future, I would also love to apply to Ph.D programs in Egyptian art and archaeology, since it has always been a personal goal of mine to achieve a doctoral degree!