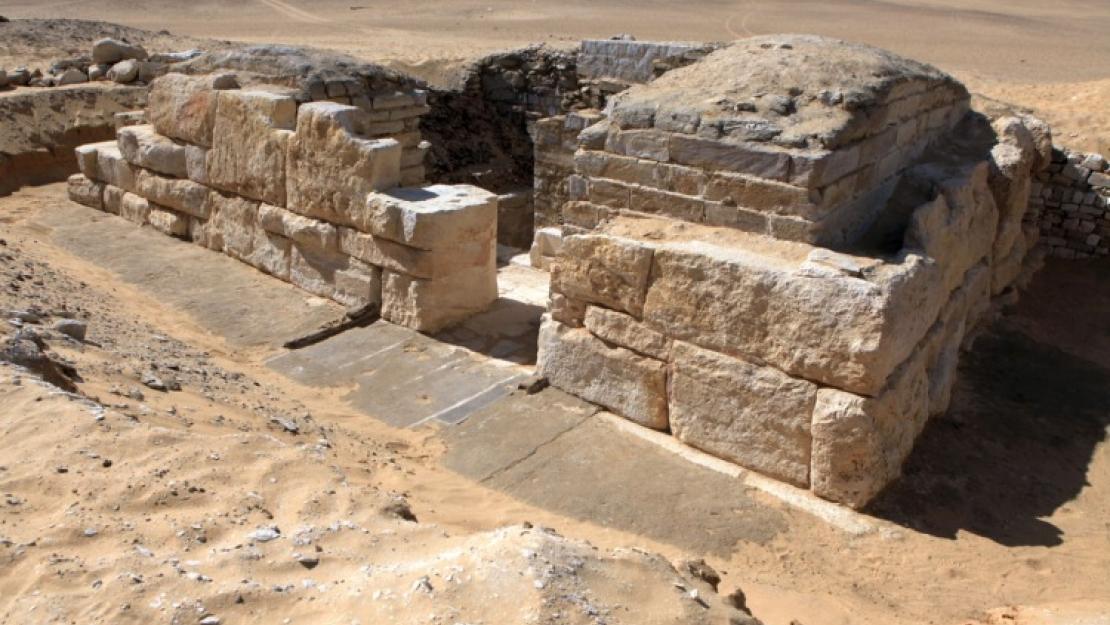 The tomb of a previously unknown queen has been discovered at the Abusir necropolis, southwest of Cairo. Thequeen’s tomb provides crucial insight into constructing the royal family history of the Old Kingdom and understanding the role of women at that time.

"What is fascinating about the tomb is the inscriptions because they show that this is a completely new member of the royal family of the Fifth Dynasty,” explained Miroslav Barta, director of the Czech Institute of Egyptology and professor at Charles University, Czech Republic, who led the excavations and was the Simpson Professor of Egyptology at AUC during the 2013 - 2014 academic year.

Within the tomb, she is identified as "king's wife" and also "mother of the king.” "We know this based on the inscriptions from her burial chamber, where she is given two specific titles,” remarked Barta. The name, Khentkaus, means "the one foremost of her souls," and two previous queens with this name have already been identified.

The addition of a brand new name, Queen Khentkaus III, in the lineage of ancient Egyptian royalty has undoubtedly stirred enthusiasm on a global scale. "She was a royal spouse," said Barta, "most likely to King Raneferef," as she is buried in close proximity to Raneferef's burial complex.

The investigation of the tomb of Khentkaus III also contributes to understanding the role of women in ancient Egypt in general. "Women, especially in the Old Kingdom, had a significant amount of power and prestige," said Salima Ikram, professor of Egyptology and head of the Egyptology unit at AUC. "To be the mother of a king gave one a vast amount of power."

"It meant, for instance, that the king built better tombs for them [mothers],” Barta explained. “So women of this rank really played an important role."

He added that tomb inscriptions most often refer to a man; there are no names and no inscriptions that refer to women. In spite of the fact that these women remain anonymous, in several cases, "if you inspect the burial facilities inside these tombs, you would find that the burials of women bear more riches, compared with the males, and these women were really very important," he said.

The inscriptions indicate the two phases of Khentkaus's life as a woman of the royal family. She was married to the king, but, more importantly, she actually gave birth to a boy who later became a king, probably Menkauhor. "In the Fifth Dynasty, there is very rich evidence showing that when you became the king, you looked back and promoted your mother and built for her a more appropriate funerary complex," said Barta. Research suggests that the transition from wife to mother was accompanied by a notable increase in respect and rank.

The discovery of this mid-Fifth Dynasty (about 2450 BC) tomb was made early this year. The tomb is located in a small cemetery that housed the burial sites of elite court members. Much of the tomb was destroyed in antiquity, including the mastaba, chapel and sarcophagus. However, the mission did uncover 24 limestone vessels and four copper tools that were part of the funerary equipment. In addition, some small fragments of bone were found. "We assume, given the archeological context, that the bones are hers," Barta indicated.

The Czech archeological team has been working in Abusir for almost 55 years and maintains a two-fold cooperation with AUC. Ikram is a permanent member of the team who works specifically in Abusir. They also have a partnership with the AUC Press and recently published The Medicine of the Ancient Egyptians, authored by three Czech scientists and covering the topics of surgery, gynecology, obstetrics and pediatrics. Abusir has proven to be a valuable site for excavation in recent years. One of the most important is the "Abusir Papyri,” some of the oldest surviving papyri to date that give detailed information about funerary beliefs and administrative systems. Another collection of exceptionally well-preserved wood and limestone statues have been instrumental in understanding burial practices and societal structures in the Fifth Dynasty. Ikram is optimistic about what research at Abusir may tell us about all strata of ancient Egyptian society. "Working here will reveal a great deal about the daily life of people who served the king, the modes of death for all classes, and also the familial and power relationships within the royal family of the Old Kingdom," she said. Barta, too, is eager about what remains undiscovered, "There are more tombs to be excavated, and we assume some of them, at least, will also belong to some, perhaps, unknown members of the royal family,” he noted, adding that what we know thus far "is probably not the last word. We will know more when our anthropologist comes, which is planned for March or April this year.” The story of the family history of the Fifth Dynasty will continue to evolve with each new find. Barta sees the discovery of Khentkaus III as another stone in the grand mosaic.