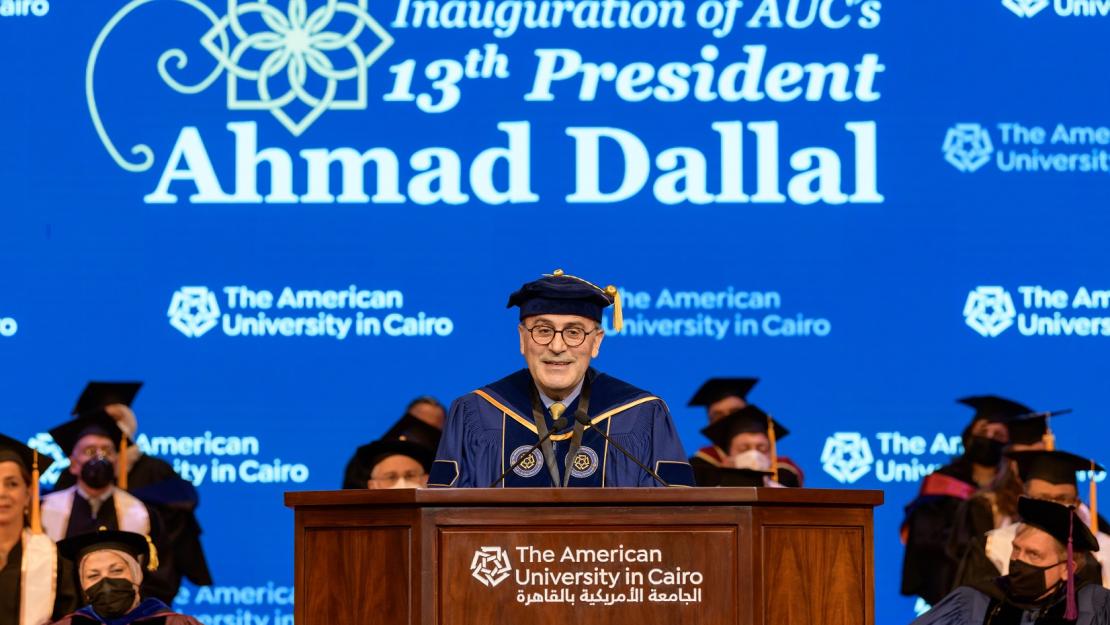 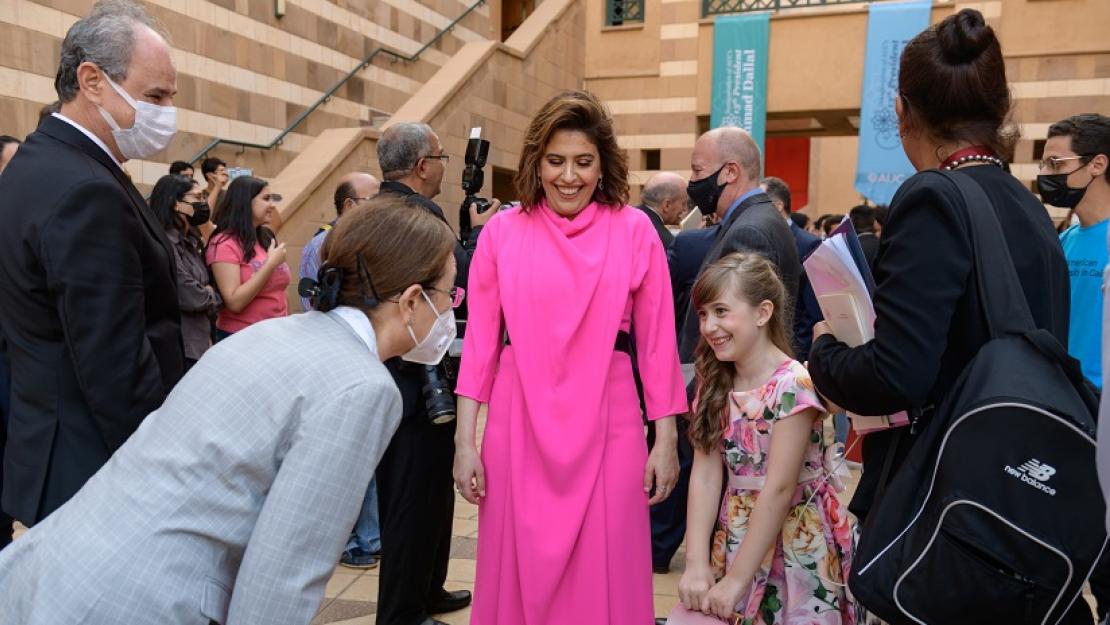 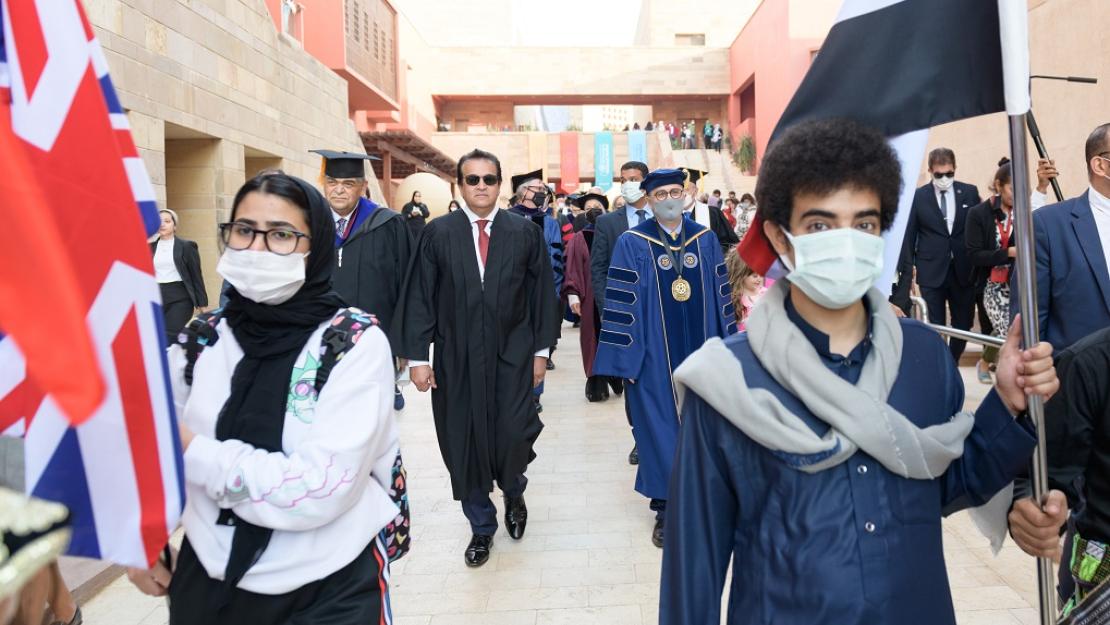 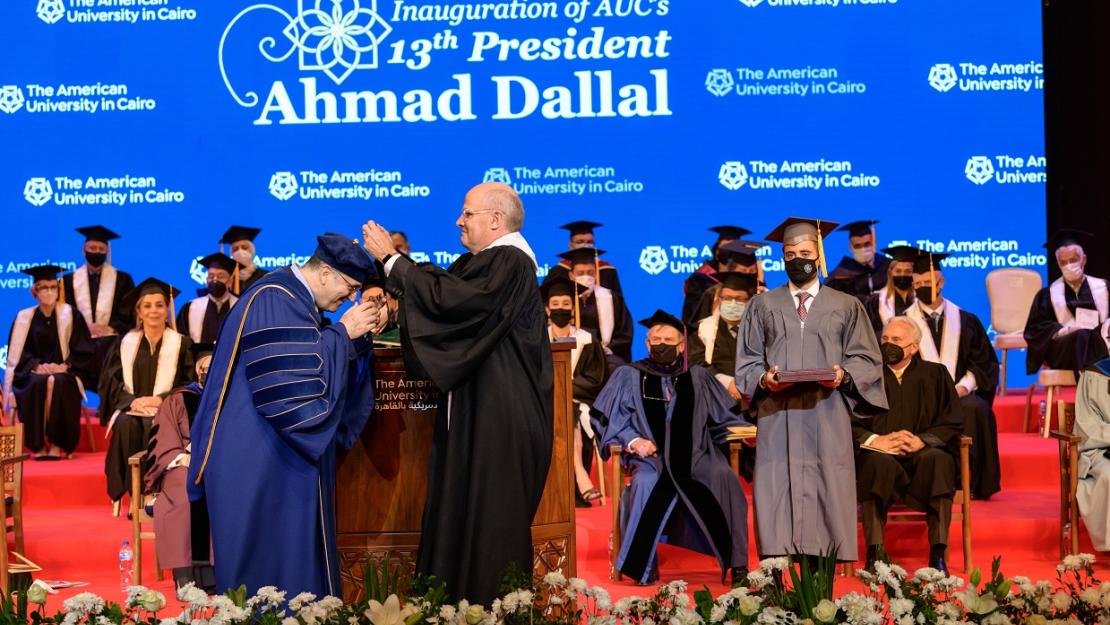 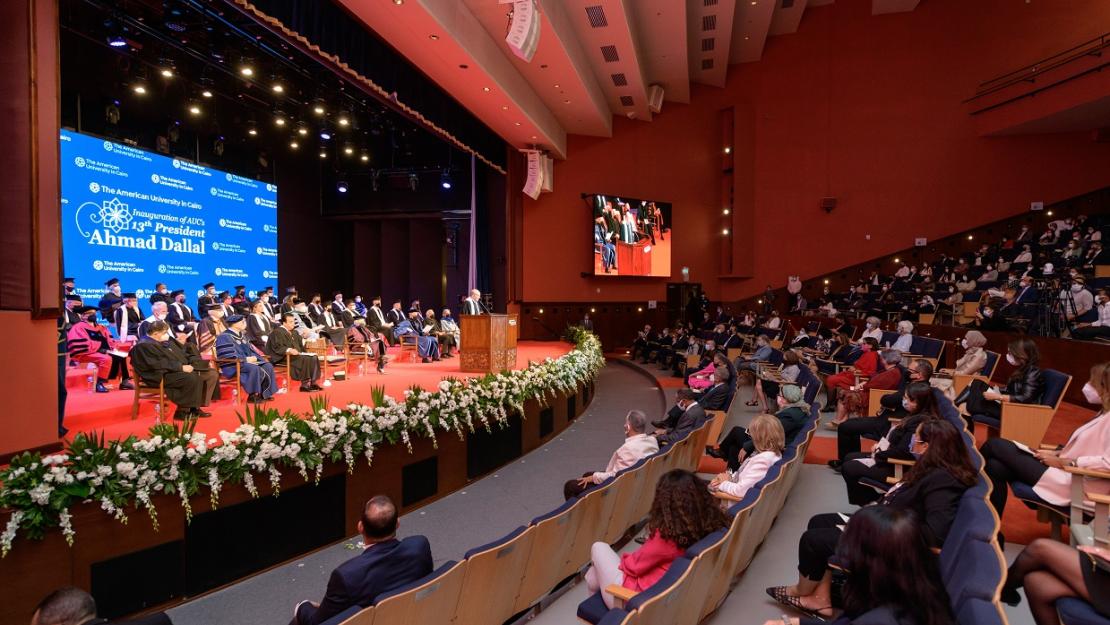 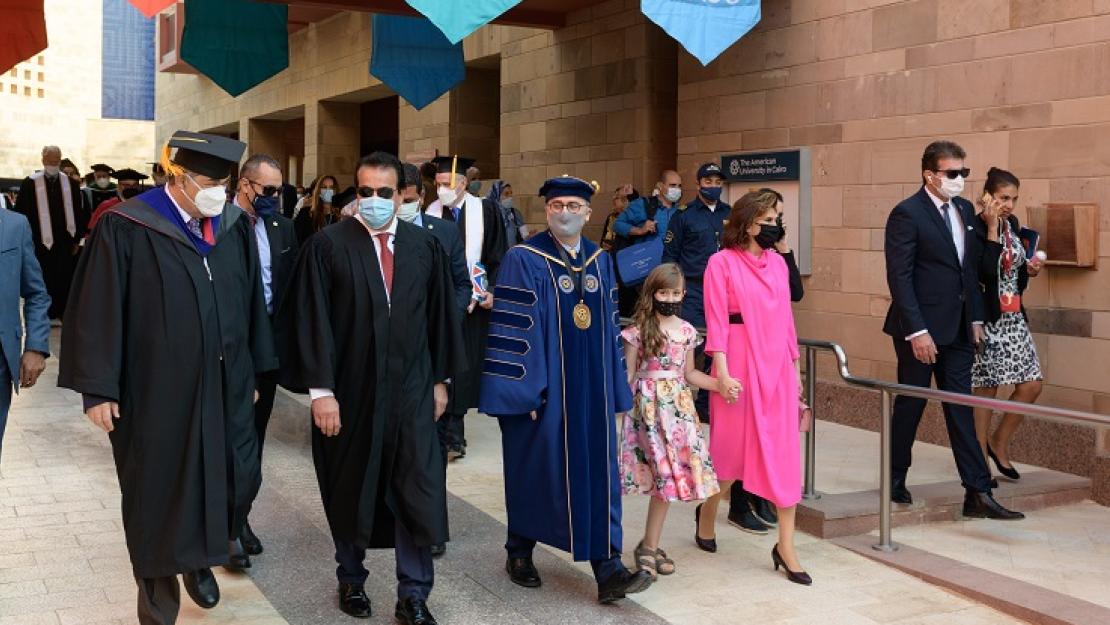 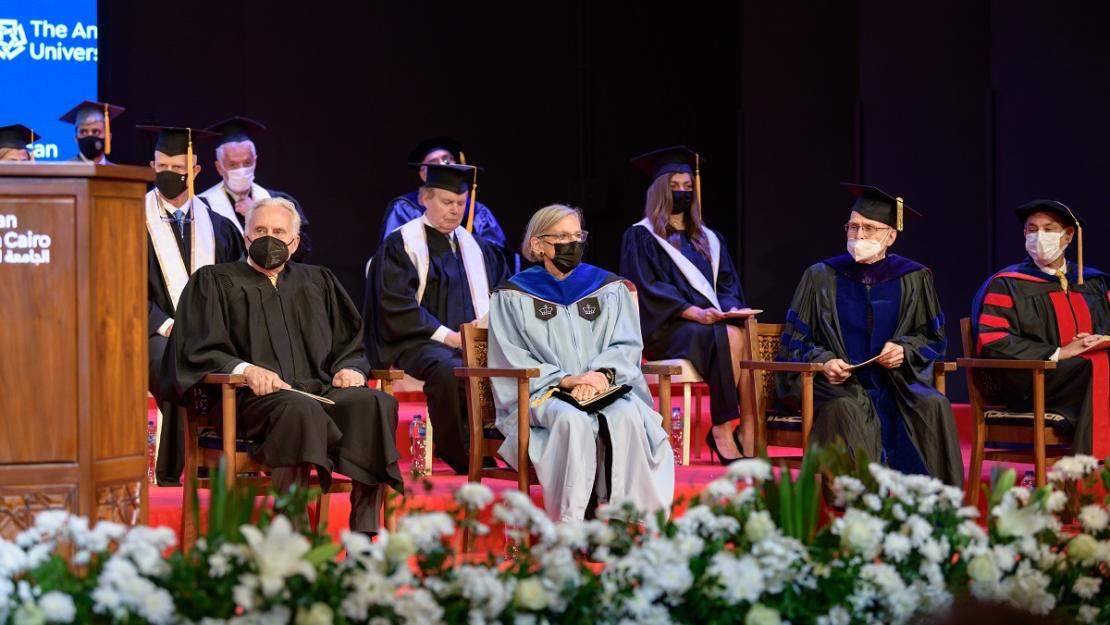 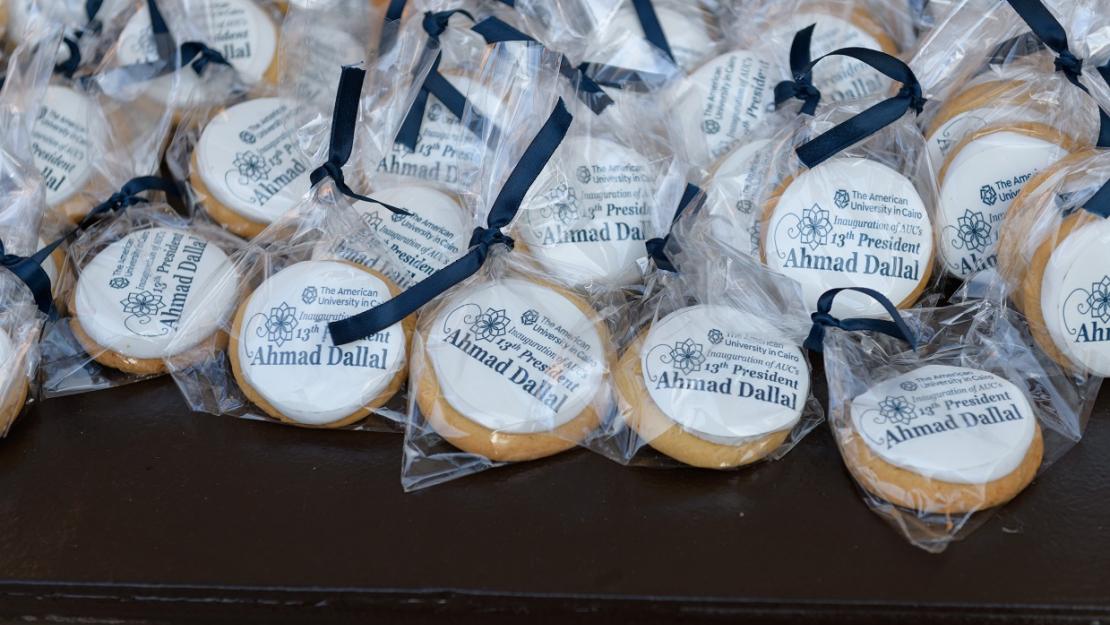 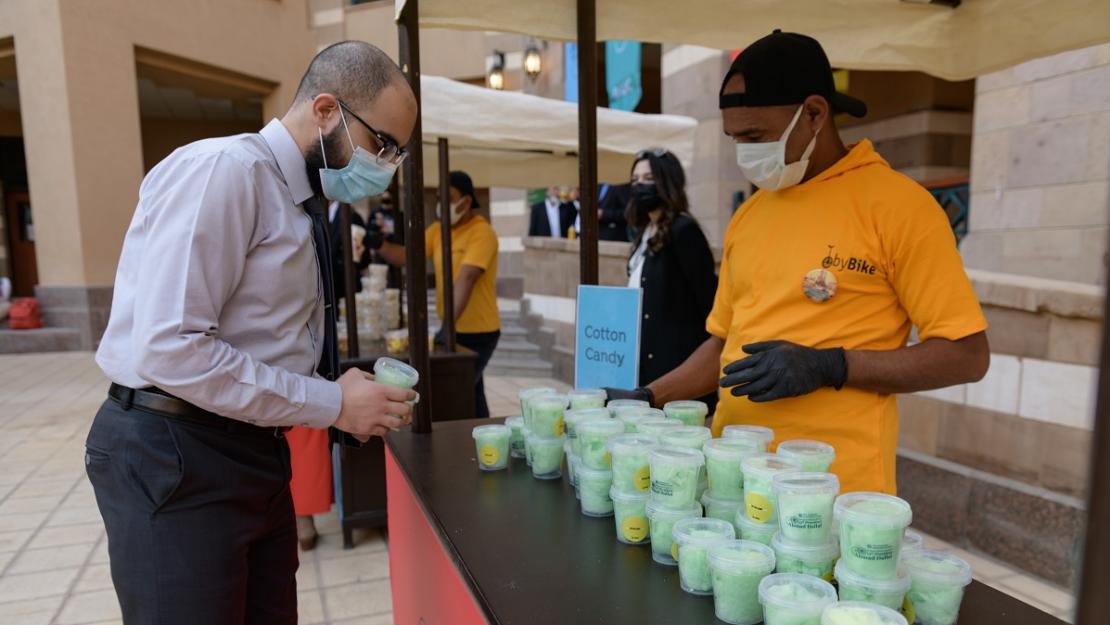 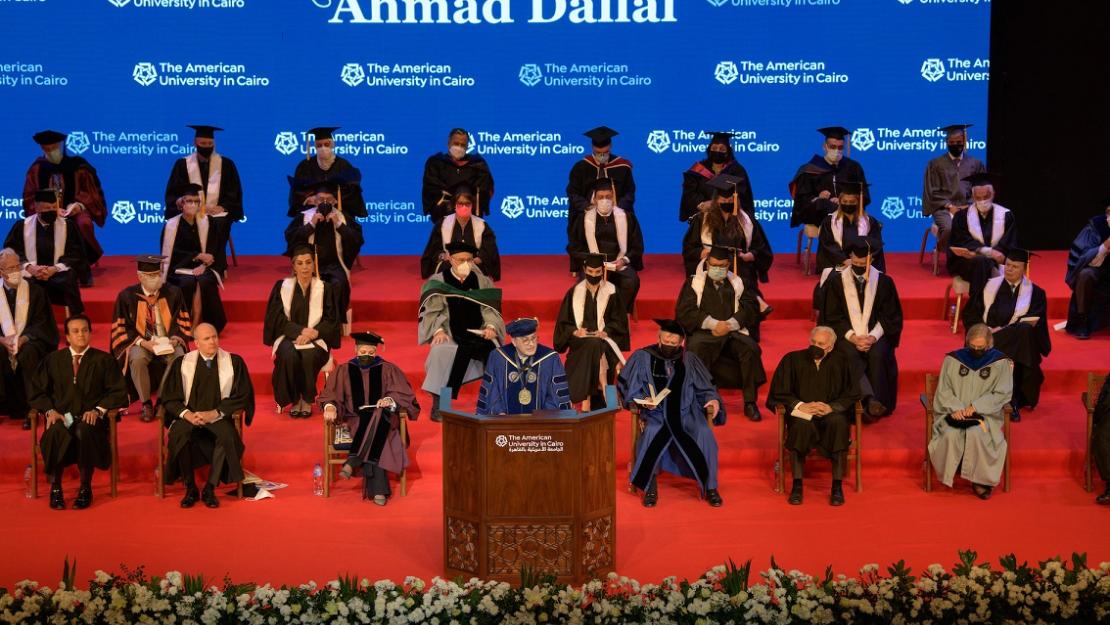 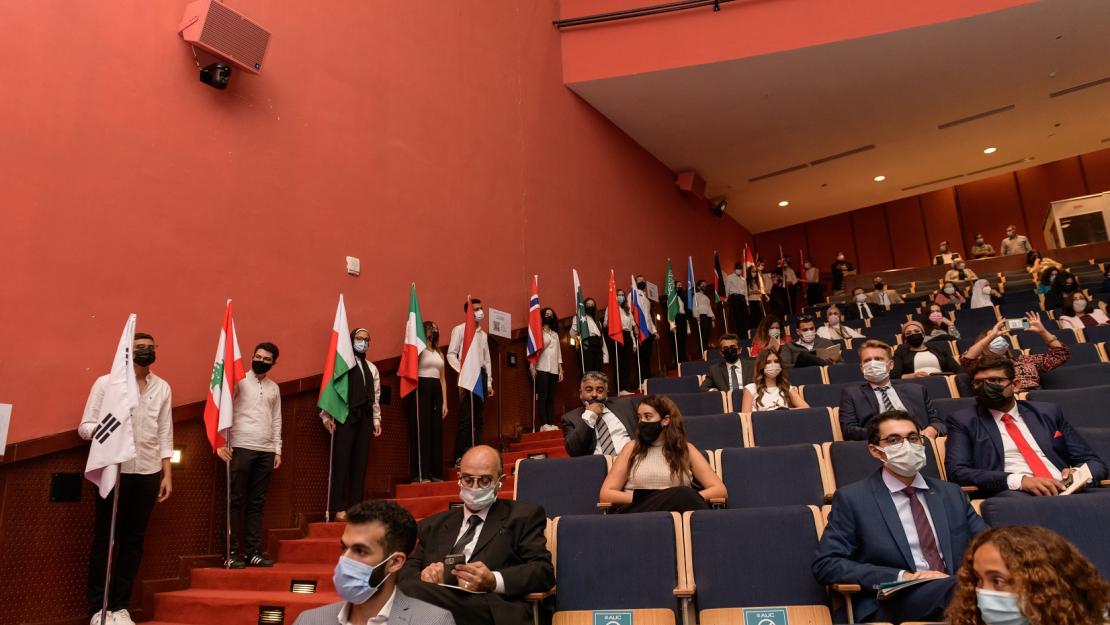 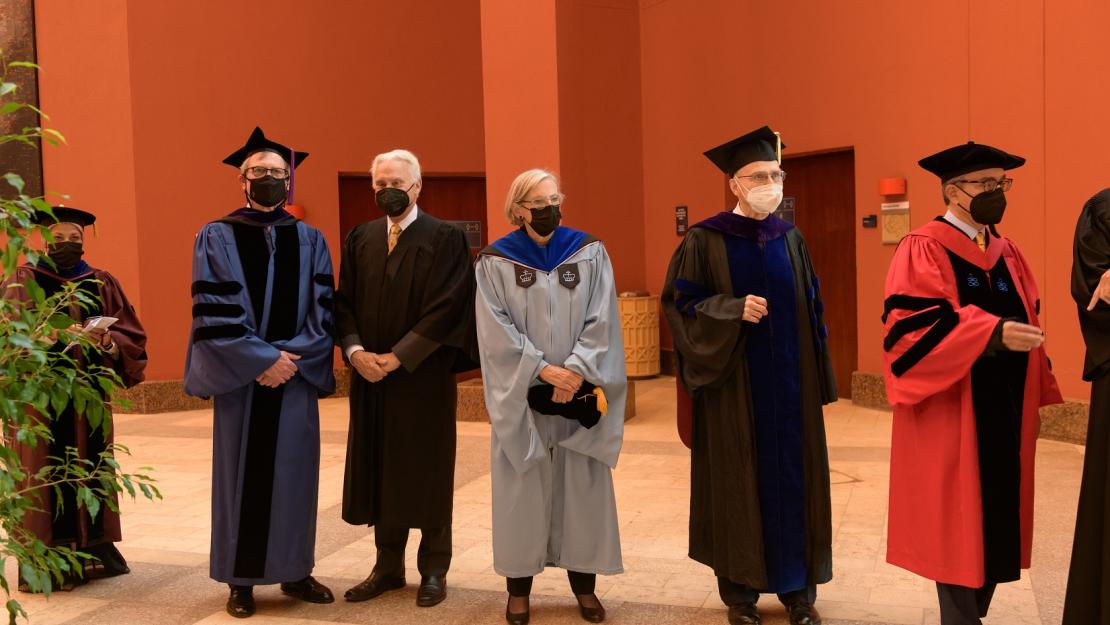 Dallal was officially vested by Board of Trustees Chair Mark Turnage (ALU ’82) with AUC’s historic medallion bearing the University emblem, in the presence of trustees, ministers, ambassadors, former AUC presidents, as well as presidents of regional and national universities, and friends of AUC.

“Today, as we inaugurate our new president, AUC stands ready to take on another ambitious dream,” Turnage said. “I could not think of a better individual to lead AUC into its second century.

Dallal is a prominent scholar of Islamic studies. Having previously taught and served at prestigious American universities, Dallal brings with him vast experience across the United States and the region. He served as dean of Georgetown University in Qatar; provost of the American University of Beirut; and professor at Smith College, Yale, Stanford and Georgetown, where he was also chair of the Department of Arabic and Islamic Studies. He earned his BE in mechanical engineering from AUB and his MA, MPhil and PhD in Islamic studies from Columbia University.

“It is my honor to join the caring and welcoming community of The American University in Cairo, and a humbling privilege to serve as the 13th president of this fine University,” Dallal said.

The inauguration ceremony took place in Bassily Auditorium with a limited audience and under strict COVID-19 safety measures. It was livestreamed throughout campus and for a global audience, including our alumni and University friends and supporters in different parts of the world.

“Whether you are here with us in the auditorium or watching online, thank you for taking part in this historic occasion. It is joyful to see our campus bustling with life again — vaccinated, masked and distanced, but coming together again for all of the quintessential college campus experiences that cannot be recreated online,” said Turnage, who reflected on the time he and other fellow trustees spent at the University.

“By the early 1980s, when I first came to AUC to learn Arabic, the University was already recognized for the unique role it played in Egypt’s higher education landscape and as an important meeting place for cultural, artistic and intellectual exchange,” Turnage said. “Like several of my fellow trustees with me on the stage today — Laurie, Gretchen, Paul, Teresa, Richard and Nathan — AUC was central to how we first discovered Egypt and ultimately created a life-long affinity for and commitment to the region."

Egypt's Minister of Higher Education and Scientific Research Khaled Abdel-Ghaffar hailed the University’s numerous contributions to Egypt throughout the past century. "As AUC celebrates the inauguration of Ahmad Dallal as the 13th President, the University will undoubtedly continue to mark and make significant contributions to Egypt, creating a positive impact on many levels,” he said. "We look forward to more exciting collaboration projects with the University in its second century. With this new leadership, we believe that the upcoming period is full of promises, and we are all eager to see it succeed, expand and endure.”

In his address, Dallal praised AUC for its past 100 years of excellence and acknowledged the challenges facing it and the world brought forth by the coronavirus pandemic. “What distinguished AUC in its first 100 years is not just the quality of education, knowledge production and societal impact that have been hallmarks of the University, but also its bold willingness to reinvent itself,” he said. “We need to learn to operate under conditions of instability. So rethink we can, and rethink we will. ”

Highlighting AUC’s institutional priorities, Dallal emphasized the importance of liberal arts education, or “ethical education” as he described it; educational innovation, not just in technology and pedagogy, but also in exploring new academic fields that address emerging trends and societal needs; university and industry partnerships; and integrity and service.

"We must put added emphasis on service: on serving our families, communities and societies, and indeed on striving to make the world a better place," he said. “In our next century, we must strive to model institutional integrity, not just in the way we conduct our business, but also in the way we live up to our core values as a community grounded in ethics, service and care.”

Dallal used an anecdote of his 8-year-old daughter, Kinda, who was seated in the audience with her mother, Dalal El Madade, to illustrate the importance of research. As Dallal recounted, Kinda was “naturally apprehensive and worried” about leaving behind her school and friends to come to Egypt, but when she googled the country, she became excited. “When Kinda was worried and anxious, she was comforted by research. We at AUC are in the business of knowledge, and this knowledge will give us strength and enable us to adapt and serve, and make the world a better place,” Dallal said, adding that AUC is “in and of Cairo” and “has always served Cairo and Egypt, and has derived its strength from the endless richness of this culture.”

The ceremony was followed by a joyful parade at AUC New Cairo. Starting from Bassily Auditorium through the center of campus, the parade included a diverse array of students: international students dressed in national costumes and carrying their country flags, athletes, theatre performers, heads of student organizations and Student Ambassadors. The parade was led by President Ahmad Dallal and AUC trustees and ended with a reception at Link Plaza in front of the Administration Building, where Dallal greeted community members.

"I am eager to learn more from the hopes and aspirations of the brilliant members of our community,” he said. “Because of them, I am immensely hopeful about the future of our university.”

One day prior to the inauguration ceremony, a series of academic panels took place at AUC. Led by faculty and alumni experts, the discussions covered pressing and contemporary topics such as sustainability, global health and human ecology; migration and refugees; and data science and artificial intelligence.