Associate Professor and Chair of the Department of the Arts Haytham Nawar's latest project, “Generative Pictographic Language,” is currently exhibited in the exhibition “Scripts and Calligraphy: A Timeless Journey,” organized by The Saudi Ministry of Culture to celebrate the cultural value of Arabic Calligraphy.

The project revolves around the idea of introducing a designed pictographic generative language that uses machine learning (Artificial Intelligence technology). It aims to raise the question of whether or not human beings can communicate through a universal language. The idea is that the machine creates a new language based on how humans once before created pictographic languages, starting from hieroglyphics until emojis. 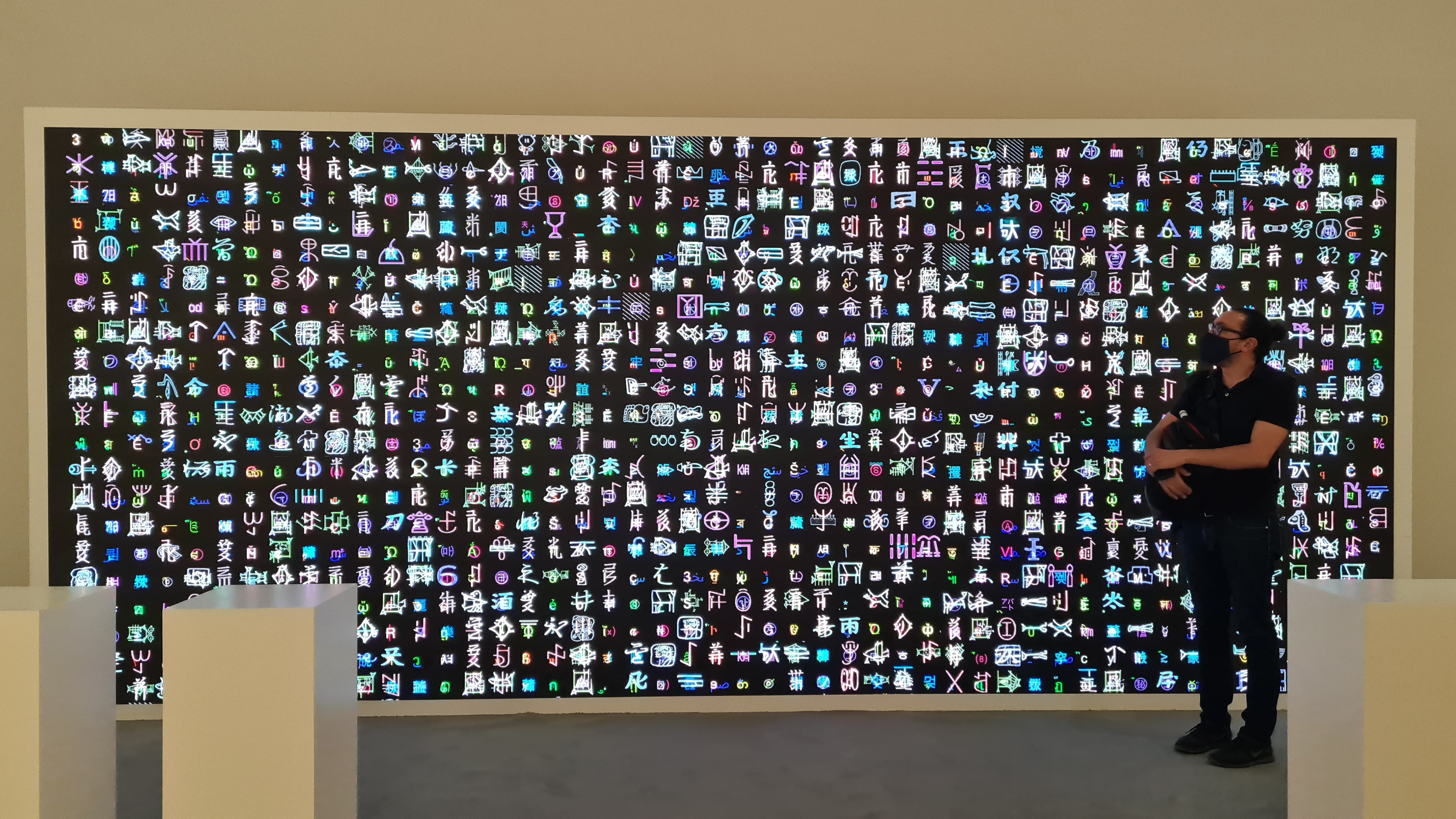 In light of what Nawar explained, "Generative Pictographic Language" is an artistic human-machine collaboration. The machine would be exposed to a database of 180 vector-based writing systems: Pictographic, ideographic and logographic writing systems, and Syllabaries and Semi-syllabaries, and Segmental scripts (Abjads and Alphabets). 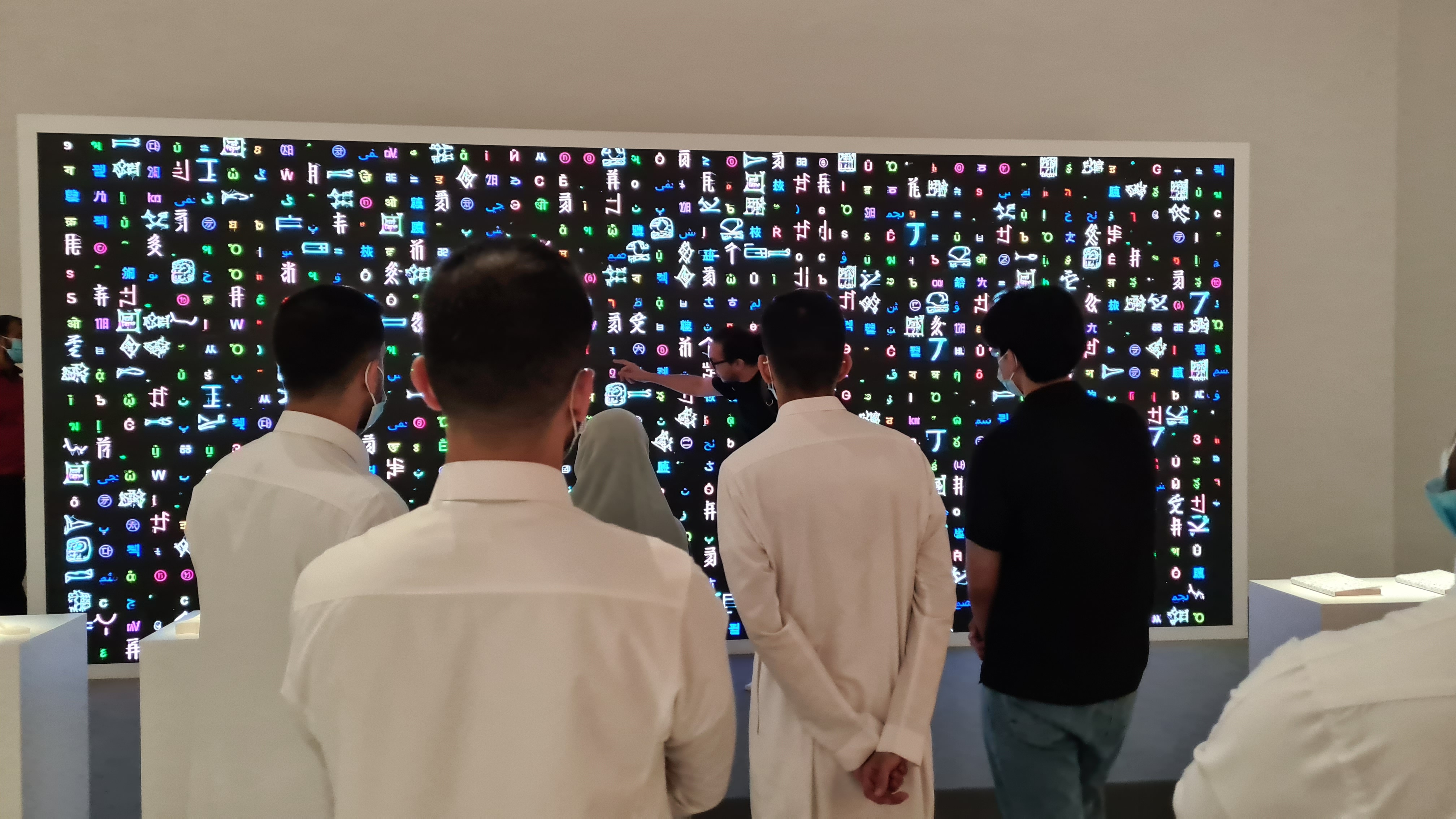 Nawar says his inspiration for the project comes from his deep interest in linguistics. "Also, as a designer and a design educator, part of my specialty is concerned with visual communication systems and typography, which is the visual representation of a language," he said.

He started research on this two years ago because of his interest in ancient scripts, specifically pictorial languages. He was seeking an ideal way of creating a universal pictographic language. With his interest in science and technology in his art practices, Nawar sought experimentation with machine learning and artificial intelligence and researched how he can use this technology to create a generative pictographic language.

The research started from looking into ancient scripts up until the alphabets and abjads, seeing the different writing systems and then combining them into a massive database of all variations of writing systems, which are more than 180 in total.  This all happened through a long process with the help of an AI Engineer, Ahmed ElGazzar, whom Nawar worked with for more than a year.

"Scripts and writing systems are instruments of the various languages that have come to exist throughout the long history of humankind," Nawar said. "They are considered a historical necessity for the emergence of our countless languages. Accordingly, an investigation of scripts and writing systems utilizing machine learning would offer insight into the visual language of the cultures of ancient civilizations, proposing a generative universal pictographic language whose traits are drawn by the machine directly from the data it has acquired and processed."

There are three main aspects of the project. Firstly, a short animated film that includes the generated script projected on a 6m x 2m screen. It shows more than 180 different writing systems, and the animated images are a mimic of the machine, showing how it creates the new language. It showcases the transformation from the original script to the newly generated script. 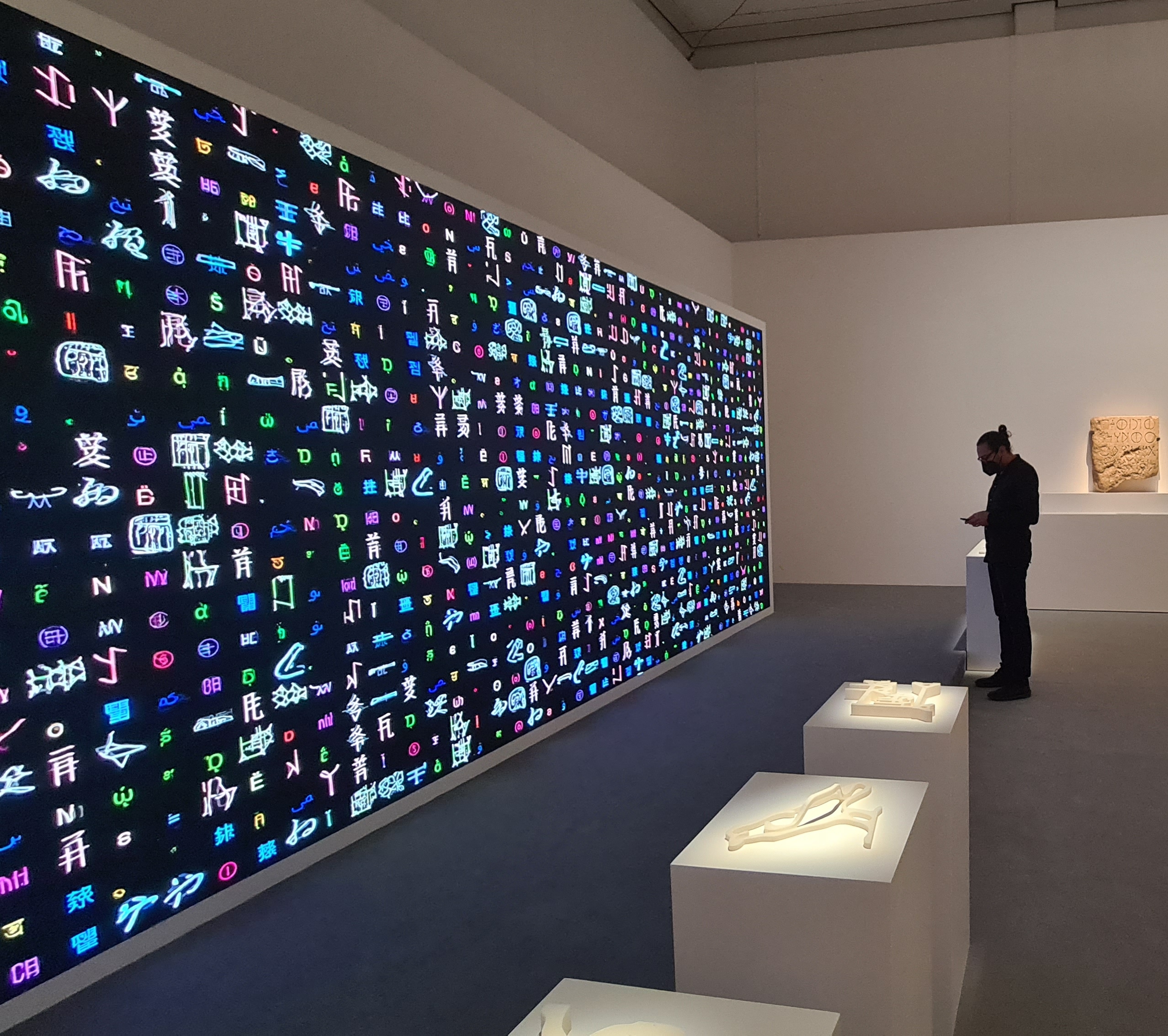 Another outcome of the project is three chosen characters of three of the writing systems (Hieroglyphs, Arabic and Cuneiform). They are transformed from 2-dimensional to 3-dimensional and 3D printed. This brings to light the challenge of communication and how it could also be 3-dimensional. 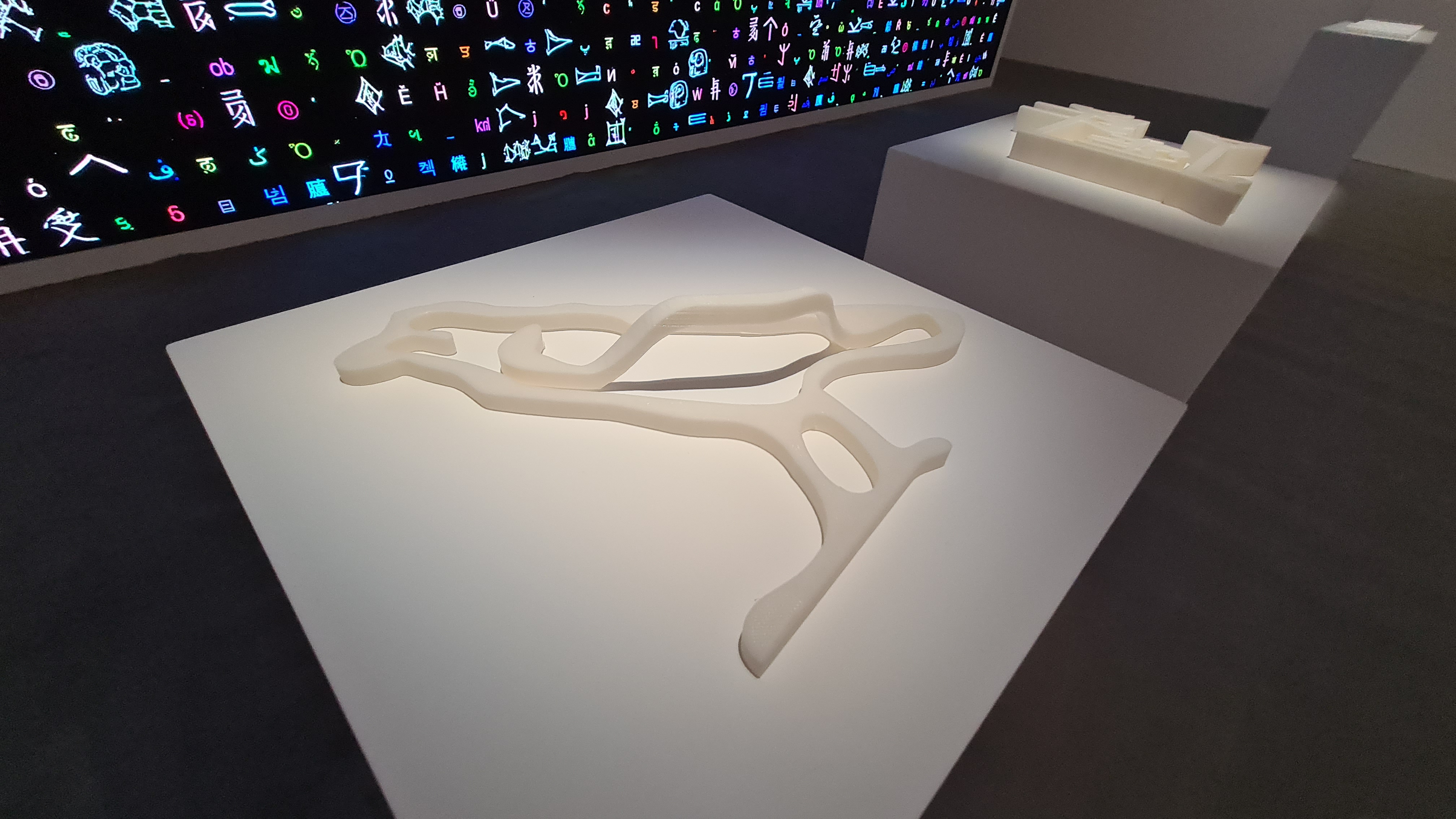 Lastly is a printed art book documenting the transformational process up until the final result. The book was a special edition and was therefore very limitedly produced. It has a detailed bilingual essay in Arabic and English explaining the whole process and the concept behind the project. 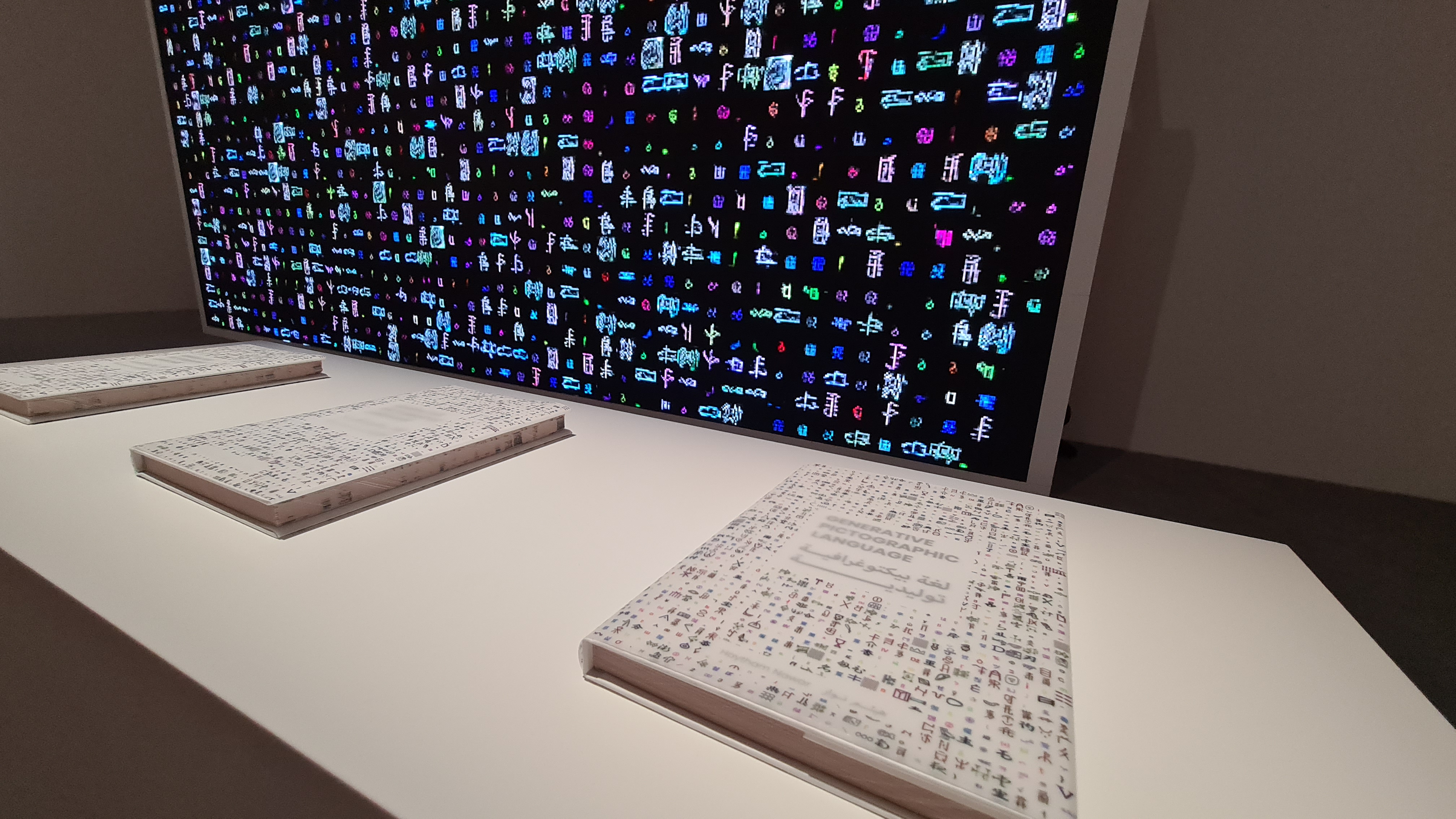 When talking about the impact of the project, Nawar circles back to the main question of whether or not we can have a universal pictographic language. Humans, he says, have created some of the most sophisticated pictographic languages over time, and it is important to explore the idea of whether or not we can create a new one that is accessible and legible to everyone.

"This is still an ongoing project. I'm currently working on a third phase of the project in collaboration with the mechanical engineering department. The third phase includes developing the 3-dimensional objects with different materials and generating performance with a robot hand to engrave the newly generated language. This presents another challenge between humans and machines, in terms of the way the first man engraved Hieroglyphics on tombs and temples and how the robot will engrave the newly generated language using the new technology," Nawar said.

He is working on this phase with Hanady Salem, professor and mechanical engineering chairperson in the Department of Mechanical Engineering and support of Alaa Edris, the associate provost of research, innovation and creativity.