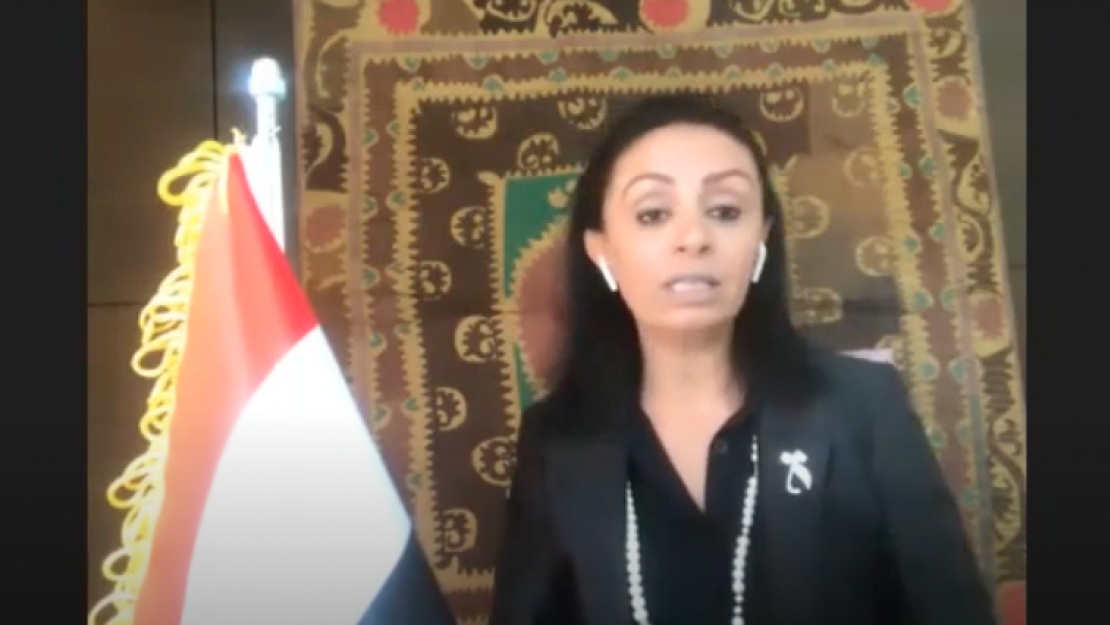 “The problem is not in us. The problem is in the community around us,” said Maya Morsy ‘95, president of Egypt’s National Council for Women during last week’s virtual discussion, Zero Tolerance: Ending Sexual Harassment, From Awareness to Policy. “This is why the renewal culture… is one of the things that we have to tackle to change the mindset of how we are perceiving women in our community.”

AUC hosted Morsy along with President Francis Ricciardone and moderator Amina Khairy '87, writer, columnist and features editor at Independent Arabia, to discuss the latest measures and efforts to combat sexual harassment. Morsy and Ricciardone also discussed the future cooperation between AUC and NCW to promote awareness on sexual harassment in higher education and discuss the policies and measures that guarantee a safer environment for women and girls.

Morsy highlighted the need to continue promoting awareness of sexual harassment to make sure women and girls are aware of their rights.

“It is alarming to find that many women and girls weren’t aware of their rights and thus were afraid to speak up when Egypt already has a legislative umbrella for protecting women,” she said.

Morsy went on to explain how the Egyptian constitution, laws and amendments protect women and girls from all forms of violence, including sexual harassment and assault, whether in public or private spaces and online as well.

“At NCW, we are standing strong with all women to make sure they have all the needed information, know where to go, how to file any complaints and receive legal support from us,” she said. “There is a strong political will from President El-Sisi downward to protect Egyptian girls and women, and there is a strong commitment from the public prosecution at large.”

Ricciardone emphasized AUC’s commitment to maintaining a learning and working environment free from all forms of harassment and discrimination.

“We have had a tradition of teaching and promoting a culture of civility and respect for all, and promoting awareness of the rights and responsibilities of the students toward each other and toward their country,” he said.

However, he added that just having a policy isn’t enough, and more needs to be done. He highlighted three actions necessary to implementing a “cultural renewal” at AUC.

“Having a strong policy, implementing procedure, and strong communication and training,” he said.

Riciardone stressed that AUC has a strict policy for sexual harassment, the Anti-Harassment and Non-Discrimination Policy, which applies to allegations of discrimination, harassment and retaliation that take place on AUC property or at University-sponsored events, regardless of their location.

As AUC has zero-tolerance policy for sexual harassment, it dedicates an online reporting system that enables any person who experienced harassment or discrimination to report a complaint.  According to the policy, AUC has a duty to keep confidential all parties involved in a reported case.

In addition to the existing Anti-Harassment and Non-Discrimination Policy, AUC’s latest measures to combat sexual harassment include the changing of the Title IX office that used to receive complaints only from students to the Office of Institutional Equity, reporting directly to the president and receiving complaints from all members of the AUC community: students, staff and faculty.

Strengthening AUC’s measures against sexual harassment, it will be mandatory that every member of the community, including the president and senior leadership, receives an online training designed to raise awareness on sexual harassment, no later than the end of Fall 2020.

Morsy touched on NCW’s efforts at not only combating physical sexual harassment, but cyberbullying as well, especially on social media.

“We are working closely with the... Ministry of Information and Communication Technology to have a wide-array campaign to inform the new generation of the abuse taking place on social media,” Morsy said.

AUC has been working with its surrounding community to combat this issue. Ricciardone mentioned that the University has been in talks with Cairo University, which has established an anti-harassment unit, a big and progressive move, according to Morsy.

The University is also joining forces with other universities and organizations in Egypt to create real and lasting social and cultural change through a national dialogue that is intended to be held by September 2020.

Both speakers emphasized the importance of the need for a cultural renewal, encompassing how people perceive women, follow an ethical code, establish boundaries and understand respect.

“Every woman since an early age is powerful, but it is the society and the pressure and the mindset around her that actually...takes away part of her power,” said Morsy.

Ricciardone noted that since changing people’s mindsets won’t happen overnight, the most impactful action people can take for immediate change is reporting through formal means.

“We can’t respond to rumors, but we do respond to complaints,” he said. “When we get an official complaint, we act on it, and we keep a record of it. And we reacted appropriately in the case that was at issue in the past controversy. That was a case from several years ago. We checked the records. We did respond, and we responded in accordance with our policies.”

Going back to the constitutional articles and laws that protect women and punish harassers, Morsy emphasized the need for reporting, mentioning that the more people see this issue being taken seriously, the more afraid harassers will become.

“When more women and girls report incidents, harassers will not take harassment lightly. With the latest law guaranteeing confidentiality to victims, I am sure many will come forward and speak up against harassment.”

For more information on #AUCSpeakUp, please visit this page.