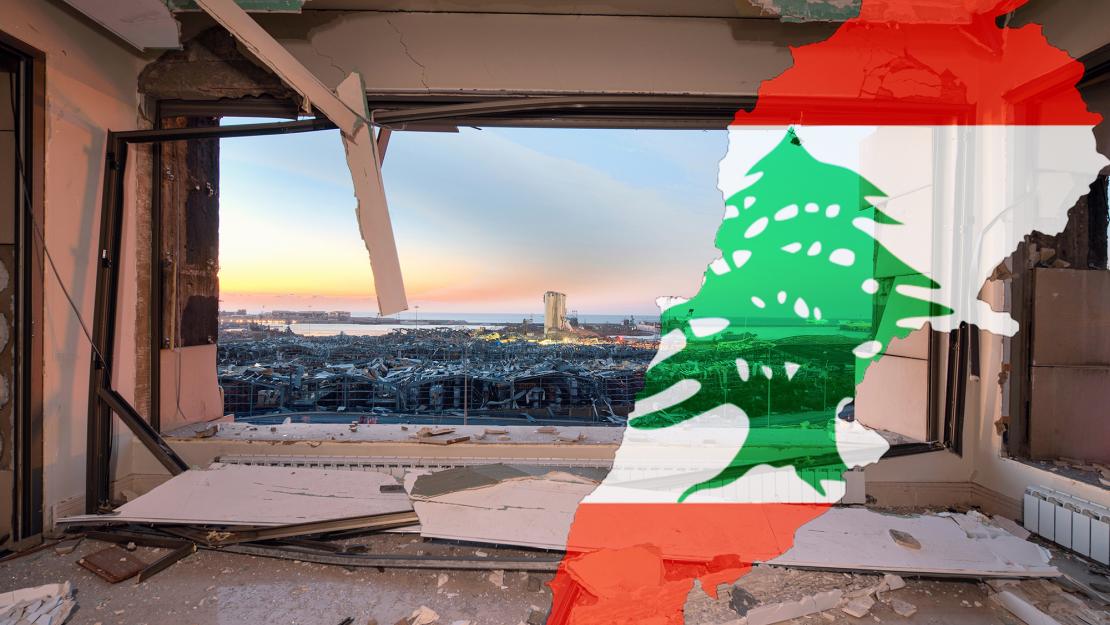 The recent explosion in Lebanon shook an entire nation — and indeed the region and the world — in every sense of the word. News@AUC spoke to faculty members in different disciplines to understand the repercussions of this calamity.

How and why did it happen?

Sarah El-Richani, assistant professor of journalism and mass communication: It is not yet definite what caused the blast, but it appears to be the result of corruption, negligence and mismanagement, which sadly are hallmarks of the political leadership in Lebanon. The blast was catastrophic, and people are rightfully demanding answers and, more importantly, justice.

Why is the timing so bad?

Bahgat Korany, political science professor: The blast, which was approximately the equivalent of 1,200 tons of dynamite and was felt as a huge earthquake as far as Cyprus, came at a time when Lebanon was already going through a multiple crises complex. A few years ago, people protested the accumulation of street garbage and the incapacity of the government to deal with such a relatively simple problem. The protestors’ slogan against the governing elite was, “Your bad smell is widespread.” This garbage problem was just a reflection of a politico-economic crisis in Lebanon. Since October 2019, street protests have become more frequent, and the economy has continued to go down. Prices of basic food supplies, for example, went up by 150%, the Lebanese pound lost 80% of its value against the dollar, the country can’t pay its debt and the Lebanese people are deprived of electricity 21 hours per day. The protestors are identifying Lebanon’s political system as the culprit.

What are the immediate consequences?

Ibrahim Awad, professor of practice of global affairs and director of the Center for Migration and Refugee Studies: Lebanon is facing an extremely dire situation. Ports have been destroyed, food imports — which account for more than 80% of the country’s food needs — are affected, money is not coming in except most probably for remittances sent by Lebanese migrants to help sustain their families, and anger is widespread.

Sean Lee, assistant professor of political science: The short-term and medium-term effects will be devastating. Already, Lebanon was suffering a severe economic crisis accompanied by hyperinflation, the rapid devaluation of the lira and a collapse of the banking sector that has all but wiped out most people’s savings. Many Lebanese were already finding it difficult to afford even the most basic staples, and this will only get worse because due to the artificial currency peg, which has now collapsed, the Lebanese economy relied on imports for almost everything. With the Beirut port all but destroyed along with its grain silos and what reserves were left and the port in Tripoli suffering from long-term neglect, we can expect to see food insecurity become more and more common in the country.

Lee: On the political side of things, over the last 15 years, I’ve never seen so much anger and rage in the country. A significant segment of the population sees the entire country’s political class as their enemy and are calling for the whole system to be destroyed.

What effect do you think the current protests will have on Lebanon?

Lee: The political elites are not likely to give up their power easily. While the Lebanese state is nowhere to be found when it comes to providing the basic services necessary for its residents to survive, it has shown itself mostly through its coercive apparatus whenever the political elites feel threatened by popular mobilization. We saw it during the You Stink protests back in 2015-2016 and during the protests last fall, and we have already seen it after the explosion. The state was notably absent while Beirutis came out in their masses to help clean up after the explosion, but the security forces were out in force to tear gas and shoot protesters.

El-Richani: So far, and as a result of the palpable anger, Beirut port and customs officials have been detained. Intense protests are vital in ensuring that at least these port officials face justice. The political class who handpicked these officials to serve their interests may well sacrifice them to appease the protesters. Is this adequate? Absolutely not.

El-Richani: The outgoing prime minister who called for early elections has resigned with his cabinet. Again this will not appease the street, as this cabinet was in power for eight months whereas the ammonium nitrates have been at the port since 2013!

El-Richani: Prime Minister Diab’s cabinet will continue as a caretaker government until a new one is formed. This is no easy task, as a national consensus government would anger protesters and a neutral cabinet is also unlikely. However intense international pressure linking much-needed aid to reforms and the formation of a cabinet might do the trick. Talk of early elections is also not a panacea, as it is very unlikely that our parliamentarians would pass a fair electoral law that would harm their interests. Protesters are also ill-prepared to take on the well-oiled machines of these oligarchs, particularly in light of the crippling economic and financial crisis.

What is the solution for Lebanon to recover?

Awad: Currently, people in Lebanon are divided. The communitarian and sectarian system is deeply entrenched. To me, the country needs a solid, well-organized and trans-sectarian political movement that recruits from all communities in Lebanon. Independent personalities from the different communities should form the nucleus of this movement. However, they should not be in the nucleus in representation of their communities. If each community protests on its own and has its own project for the future, this is not a solution.

Lee: Many Lebanese citizens see the state as irredeemably corrupt and so no longer trust it to handle any sort of influx of money for reconstruction or even humanitarian needs. In the immediate aftermath of the explosion, there will need to be an influx of support and funds that bypass the state and go directly to grassroots organizations and institutions like the Lebanese Red Cross. This will be tricky to accomplish in a way that doesn’t flood the country with new dollars and further devalue the lira.

Korany: In the short term, the most immediate task is to get people out of their despair and start solving daily problems, such as caring for the wounded, especially that some of the hospitals have been destroyed by the blast; finding shelter for the 300,000 people who lost their homes; and rebuilding the port, which ushers 70% of Lebanon's needs. The most immediate way to recover is to deal with the economic problems

How can Lebanon recover economically?

Haidar: Lebanon now needs urgent foreign aid. But to avoid elite capture, knowing how to channel foreign aid is key. It is important to ensure transparent channels are in place to guarantee any foreign aid that goes to Lebanon ends up where it’s supposed to end and does what it’s supposed to do. Recent analysis showed that few firms captured development and reconstruction foreign funding over the last decade, suggesting insufficient transparency in public resource allocation processes.

Korany: The percentage of the poor before the blast was 52% and is now increasing. It is important to mobilize international aid, but also to establish trust in the government by containing widespread corruption. Otherwise, as French President Emmanuel Macron said during his rush to visit Beirut, international aid is not guaranteed. Lebanon was negotiating with the International Monetary Fund before the explosion for $1 billion when it really needed $5 billion. Preliminary estimates of the country’s current external financing needs amount to $12-15 billion. While political reform is certainly the inescapable objective, achieving palpable economic results will take shorter time and help people regain hope.

What is the effect of this disaster on the region?

Korany: Beirut was traditionally called Paris of the Middle East, and Lebanon has been perceived as a model of political opening or democracy. Its model has failed, and Lebanon could now join the list of failed states such as Iraq, Syria, Libya or Yemen.

Korany: I was saddened by a petition signed by about 60,000 Lebanese people and sent to President Macron asking for a return of the French mandate after 77 years of gaining independence! This is an explicit demand for a return of colonialism in the Arab world — pure and simple. I hope that local governing elites will realize the seriousness of such views and do better to avoid pushing people to think that a return to colonial times could be the way out of their problems.

What’s next for Lebanon?

Haidar: Time is at a prime in Lebanon now. Donors are currently exploring possible ways to support the people of Lebanon. It is essential to overcome the lack of progress in the institutional and structural reform discussions, and focus on human and economic recovery.

Korany: Blast or no blast, the reform of Lebanon's feudalistic political system has to be the main objective. Given the complexity of the issues and the need for consensus among protesters, the elaboration of a workable political substitute to the present system will, unfortunately, take time.

Lee: In the long term, Lebanon’s political and economic systems have proven themselves resilient in the face of attempts at reform, so completely new systems are needed: ones that involve a real social contract and treat people as citizens rather than members of a sect.

Awad: Lebanon needs an integrated political system — not a coalition of leaders of different communities. It is obvious that this political system will have to be pluralistic and secular. Challenges may not be overcome immediately or in the short term. But with the ingenuity of the Lebanese people, they can be gradually addressed in the medium term. Nobody should think of a solution for Lebanon in terms of a zero-sum game. All political and social parties should be incentivized to create the integrated political system that equally and indiscriminately serves the interests of the entire Lebanese population and secludes it from undue regional and international interference.

El-Richani: I am doubtful much-needed meaningful change is possible. Sadly, the “pessimism of the intellect” dominates, and I fear that the real perpetrators of this calamity — the political and sectarian cartel — will again dodge responsibility and safeguard their interests by twisting facts or even using force. The system is deeply entrenched, and the protests — though heartening and traverse sectarian lines — are yet to emerge as a unified force able to challenge the established zuama, or leaders. I hope I will be proven wrong.