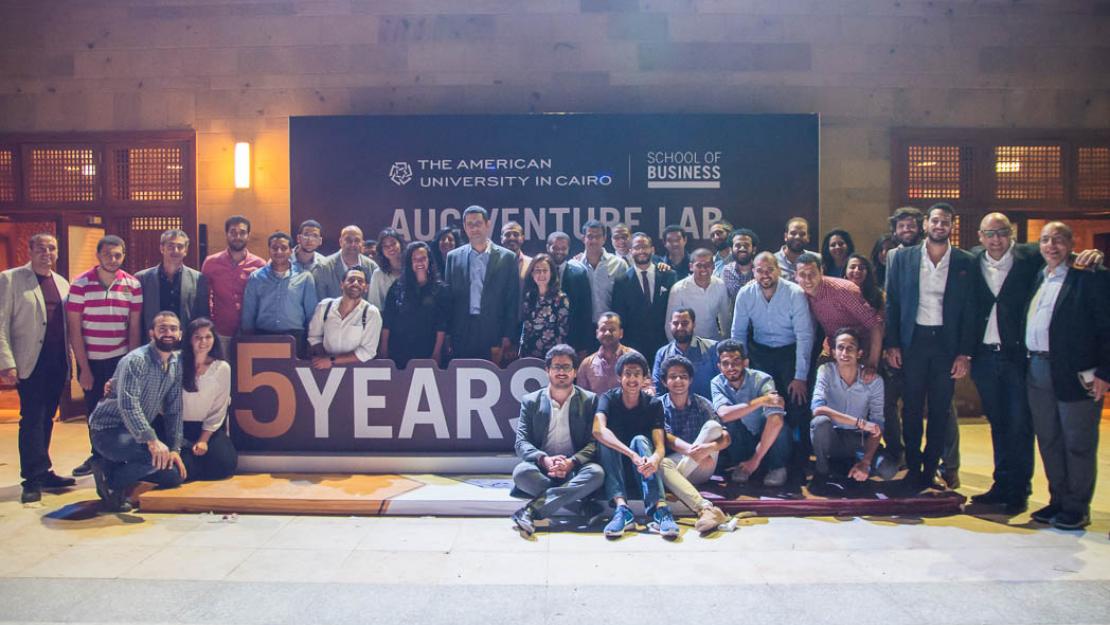 The AUC Venture Lab, Egypt’s first University-based startup incubator and accelerator, recently celebrated its fifth anniversary. During those five years, the V-Lab incubated 115 startups that generated EGP 88 million in revenues, raised more than EGP 220 million in investments and created more than 500 new jobs. V-Lab was also recognized as a top university business incubator in Africa and high-impact incubator in the Middle East and North Africa region by UBI-Global.

“AUC Venture Lab had a distinctive impact on Egypt’s entrepreneurial ecosystem,” said Ayman Ismail ’95, ’97, director of the AUC V-Lab and the Abdul Latif Jameel Endowed Chair in Entrepreneurship. “[This impact is] not only by supporting innovative, high-growth startups, but also by connecting them with AUC’s educational mission through experiential learning, where students and entrepreneurs work together and collaborate to create value for the startups.”

Since its launch in 2013, AUC Venture Lab has provided more than 1,500 hours of mentoring and training to its entrepreneurs. These V-Lab graduates, driven by creativity and determination, went on to provide life-changing services and experiences, contributing to facilitating lives across Egypt and the region.

Since its founding, the AUC Ventura Lab Startup Accelerator was supported by several corporate partners, including the Arab African International Bank (AAIB), a corporate leadership co-founder, as well as SODIC, Shell and General Electric. “The collaboration between AAIB and AUC Venture Lab marks a unique alignment between financial and academic institutions for the interest of entrepreneurs,” said Hassan Abdalla, chief executive officer of the AAIB. “As a main driver in the Egyptian economic scene, the financial sector must play a role in empowering the entrepreneurship ecosystem in the country.”

People are constantly trying to find ways to better manage their money and time, and financial technology (FinTech) is helping the world move in that direction, with the AUC V-Lab becoming a regional and local hub for this transformation. In Fall 2016, V-Lab launched the AUC Venture Lab FinTech Accelerator in partnership with the Commercial International Bank (CIB). Since then, the V-Lab FinTech Accelerator has graduated 18 FinTech startups, contributing to the growth of the FinTech ecosystem in Egypt.

With the FinTech field growing in Egypt, both financial and non-financial institutions are becoming more open to these innovations, and entrepreneurs are finding more ways to stand out when they enter the world of FinTech. Q-Less, founded by AUC student Walid Wael Abou ElNour, Saeed Talaat ’16, Hashim Ibrahim ’16 and Youssef Galal, is a startup that’s out to tackle one of the country’s most frustrating experiences: being in queues and hoping to not waste your day while trying to make a payment. Q-Less is an online platform built on a system that facilitates transactions between customers and service providers. It allows customers to make everyday payments, renew subscriptions and pay tuition without having to stand in endless queues.

Abou ElNour, finance and accounting major at AUC and financial analyst of Q-Less, said that the startup joined the AUC Venture Lab at a mature stage, with a developed prototype and business model. Nonetheless, the lab played the role of a mentor and supporter. “The V-Lab was more of validation,” Abou ElNour explained. “We had access to different mentors with high expertise in their fields who were able either to validate and support what we did or guide us to more efficient and profitable alternatives,” he said. “Both were beneficial for all of us. They greatly expanded our knowledge and understanding.”

The process of entering the V-Lab takes startups through several stages. It starts with applications, screening, mentoring and judging, then it becomes serious business, where startups go through the acceleration process, where they receive intensive training. Then on Demo Day, startups are presented, and finally, there is incubation, where startups are granted an extended amount of time to use the V-Lab’s services.

“It gave us more trust in our startup,” said Abou ElNour. “As entrepreneurs, we are always on a ride in an emotional rollercoaster of doubts, hope, success and failure. However, having your idea mentored and supported by people with very high expertise, knowledge and impact in the entrepreneurship field at the V-Lab gave us a boost and assurance that we are on the right track.”

Startups who graduate from the V-Lab all have one thing in common: serving different communities and sects of societies. One of them is Egypt’s most recent and useful transportation options: Swvl – a mobile app that organizes convenient transportation routes around Egypt at reasonable prices. Co-founding CEO Mostafa Kandil ’15 and his team are alumni of the AUC Venture Lab. Today, Swvl has raised $8 million in its first round of venture capital financing, which is the largest round of funding for a tech startup in Egypt and one of the largest in the Middle East.

“V-Lab was instrumental in Swvl's early days,” Kandil affirmed. “The team's mentorship and constant feedback on how to take Swvl from zero to one was key in how we shaped our marketing, operations and other key functions. Being a V-Lab graduate was a stamp of confidence when we started fundraising.”

With its entrepreneurial support and the knowledge and guidance of mentors, the team was able to launch the application before graduating from the cycle. Kandil confirms that Swvl is on a mission to create 5,000 micro-entrepreneurs who own their vehicles to make a better living.

“What we’re doing is building public transportation for emerging markets,” said Kandil. “Often, people outside of emerging markets don’t understand the magnitude of this global issue. In these markets, the middle class doesn’t have affordable ways to commute. We’re going to these markets and building the infrastructure for them.”

Many may have seen ads around Facebook about wearing their favorite designers’ sartorial masterpieces at an affordable price — it’s the unique V-Lab graduate, La Reina, founded by Ghada ElTanawy and Amr Diab. La Reina, which is based in a platform that allows customers to rent formal gowns, recently raised $1 million in a first round of investment from Algebra Ventures and 500 Startups.

La Reina’s service is targeted at women, with 75 percent of the team behind it being women. The couture service allows customers to rent gowns according to their occasion — whether it’s a formal evening or their wedding. In return, it allows others to make use of gowns that were bought and worn once, but are in great condition ready to be reused.

In the two years since its launch, La Reina brought in more than EGP 3.5 million in total for gown owners. “The AUC V-Lab was my first window to the startup ecosystem,” said ElTanawy. “After I joined, I was mentored by many entrepreneurs and got to know them, and they who helped me in my journey. They encouraged me to apply in competitions, one of which was RiseUp Explorer, where we were named one of six most promising startups in the Middle East and went to Silicon Valley.”

With a growing team of talented and determined individuals, La Reina is looking forward to creating a “humble boost for the local economy,” through increasing the number of items to 5,000. This will result in an increased revenue — up to 8 million for dress owners — as well as expansion to the regional market.

ElTanawy noted that V-Lab has been there every step of the way, and she expects it to always be there for support as her business grows. “The AUC V- Lab was a supporting partner all the way,” she explained. “I have always reached them for advice, and the mentors are mentors for life — not for a three-month cycle.”

She added, “When I am faced with challenges or different opportunities and I need guidance, I always reach out to them — specifically Professor Ayman Ismail. They follow up with me along the way and warn me if I have a blind spot in my business. I advise future entrepreneurs to get the most out the AUC V-Lab because it really can change your life. Consider them family because they are willing to go above and beyond for your success.”