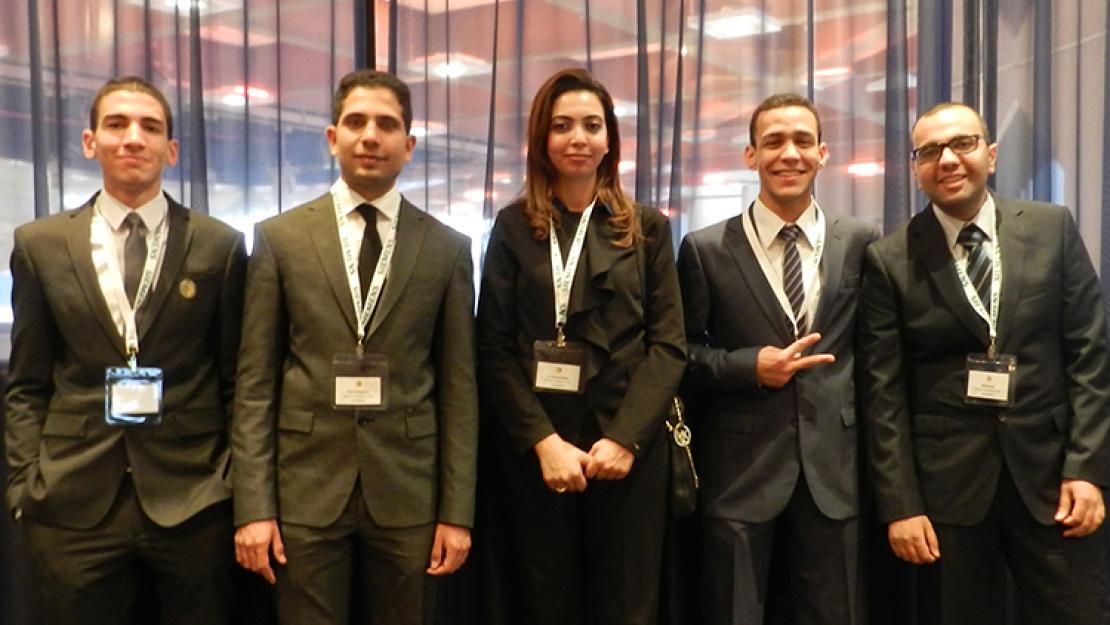 For the first time, four AUC students are competing in the second annual student-run Engineering and Commerce Case Competition (ECCC) at Concordia University in Montreal, Canada. AUC's team is one of only two from outside of North America.

The team consists of mechanical engineering students Ahmed Amer and Abdelrahman Maged, economics major Omar Abdel Aziz El Gammal and business major Abdelrahman Abozeid, who is the recipient of the Middle East Carpets (MECCA) Endowed Scholarship at AUC. The cross-discipline competition, which began on March 10, is the only one of its kind in Canada and requires the collaboration of two business and two engineering undergraduate students to solve real-world cases.

Neveen Ahmed, assistant professor of management at AUC's School of Business, is accompanying the team to Concordia. "This is the first engineering-business case we compete in," noted Ahmed. "It's the first time we have a mixed team from two different disciplines working on the same case in a competition."

The teams are organized into four divisions, comprised of three teams each. In their division, the team from AUC will be presented with three cases to solve within six, eight and 10-hour time limits. After the given preparation time, the team will have 15 minutes to present their solution from an engineering and business point of view. The teams will be scored by a panel of judges based on the quality of their results. The top team from each division will compete in a final presentation round.

The competition has potential to create innovative new ideas because each case given represents real-time industry challenges Abozeid, whose business studies are specialized in accounting and finance, noted that the cases are going to focus on the local Quebec and Montreal markets, and most likely one of the cases will be about construction.  The team has been preparing for several weeks, with practice cases provided by the competition organizers.

One of the biggest challenges for the team, according to Ahmed, is learning how to balance the two angles of each case. "It requires collaboration among the four students who come from different backgrounds to develop one solution that tackles the engineering technical part and the business component," he explained.   In one practice case, Abozeid said, "We had to design a centrifugal blower to make it cheaper and lighter. We learned that you should focus first on what the engineers can actually do."

However, Abozeid acknowledged that the engineering and business sides have to play an equal role. "For the engineering solution to be chosen, we need some business help to know which one is more profitable. We all had to work together," said Abozeid.

It is precisely this challenge of working across disciplines that makes the competition so valuable, because it mirrors the problem-solving skills needed for future employment. Abouzeid, who is considering a career in management consulting, acknowledged the practical experience he will gain from participating.  "This is what consultants do," he affirmed.

In addition to the development of practical skills — teamwork, collaboration, networking and public speaking — Ahmed is confident that the competition will help her students evolve personally. "It is a unique experience, a life-changing experience, that will enrich the students' knowledge and develop their personalities" she said.

Whether or not the team comes away with a prize, the experience alone will be a fitting reward for their hard work. "It's the process that's important," acknowledged Abozied. "The treasure is in the journey."