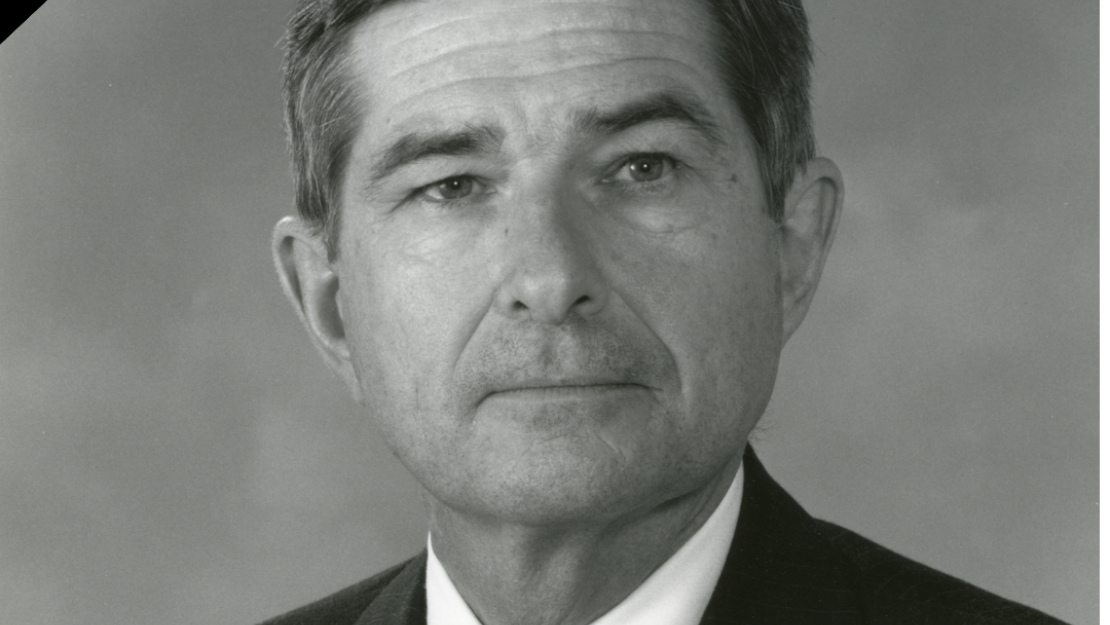 McDonald, who served as AUC’s eighth president from 1990 to 1997, led the University through a period of expansion and increased recognition. During his tenure at AUC, the University opened the Zamalek building, inaugurated the Rare Books and Special Collections Library, established the Senate and celebrated its 75th anniversary. It was also during the last year of his tenure that AUC purchased land in New Cairo, which later became our New Cairo campus. In 1993, he reorganised AUC’s academic structure into three schools — the School of Business, Economics and Communication; School of Humanities and Social Sciences; and School of Sciences and Engineering — each headed by its own dean.

McDonald studied civil engineering at Auburn University (then Alabama Polytechnic) and the University of Illinois, where he received his PhD in 1959. After working at Lockheed Martin and North Carolina State University, McDonald spent 17 years at Texas A&M University as professor of civil engineering, department chair and, finally, provost and vice president for academic affairs. In recognition of his service to AUC, McDonald was awarded the Order of Merit First Class in Sciences and Art by Egypt’s president.

"His successful seven-year presidency has invigorated the University with new faculty and with higher academic attainment, and has given AUC much greater impact in Egypt, the Middle East and the world," said Frank E. Vandiver, former Board of Trustees chair, as quoted by the Caravan in 1997.

"I was chair of the search committee when Donald McDonald was selected to serve as AUC's president and was one of the first members of the faculty to get to know him. We met several times during his presidency and also saw each other at various social events. As president, he was always cordial and listened carefully to what others had to say. Some of the meetings I and other members of the faculty had with him involved contentious issues. Unlike many people in contemporary American politics, he was able to disagree without being disagreeable."

"I was very saddened indeed to learn of the passing of former President Donald MacDonald. After a period of strong enrollment growth in the 1980’s, his meticulous attention to detail and highly disciplined approach to problem solving and long-range planning made him ideally suited to strengthen standards in faculty, students and staff and in the services provided. It was he who laid the groundwork that subsequently enabled the University to bear the strains – financial, administrative and programmatic – of simultaneously operating from Tahrir Square and building a new campus in New Cairo. He worked tirelessly and inspired those around him to give of their very best. I count myself privileged to have been part of his administrative team. "

"As is a tale, so is life: Not how long it is, but how good it is, is what matters” — Seneca. "While we pray that Dr. McDonald had a good life, I would like to extend my deepest condolences to his family and friends. Apart from Dr. McDonald's achievements at AUC, aptly described by President Ahmad Dallal, it is laudable that after retirement, he devoted a great deal of his time to the support of charitable causes. May his loved ones find solace in their fond memories, and may he rest in peace."

"President McDonald ranks among the best presidents AUC had. Professionally, he emphasized quality of education.  He appointed a committee to work on quality of education for over one year. He realized that the administrative structure of a university is important for the proper running of education. He ... introduced "schools" for the first time, created the Senate and [built] the Rare Books library, which was located in a beautiful villa not far from the AUC campus and made sure that the library was constantly enriched. He cared that AUC help Egypt by supporting AUC's Desert Development Center, which did superb research that benefited [the country]. He was the first in AUC history to engage the faculty in the University budget. ... He inaugurated the Zamalek hostel and agreed with the Cairo governerate to demolish the Falaki hostel and rebuild it as the Falaki campus. On the personal side, Dr. McDonald was a man of high moral standards, a man who emphasized fairness and equity, a man who thought a lot before taking decisions. ... The spiritual aspect in his character was always shining."

"Dr. McDonald was a great president with admirable humanitarian and academic qualities. He genuinely cared about AUC and its faculty, staff and students. Thanks to his efforts, he managed to obtain the land that AUC is occupying today. May God bless his soul."