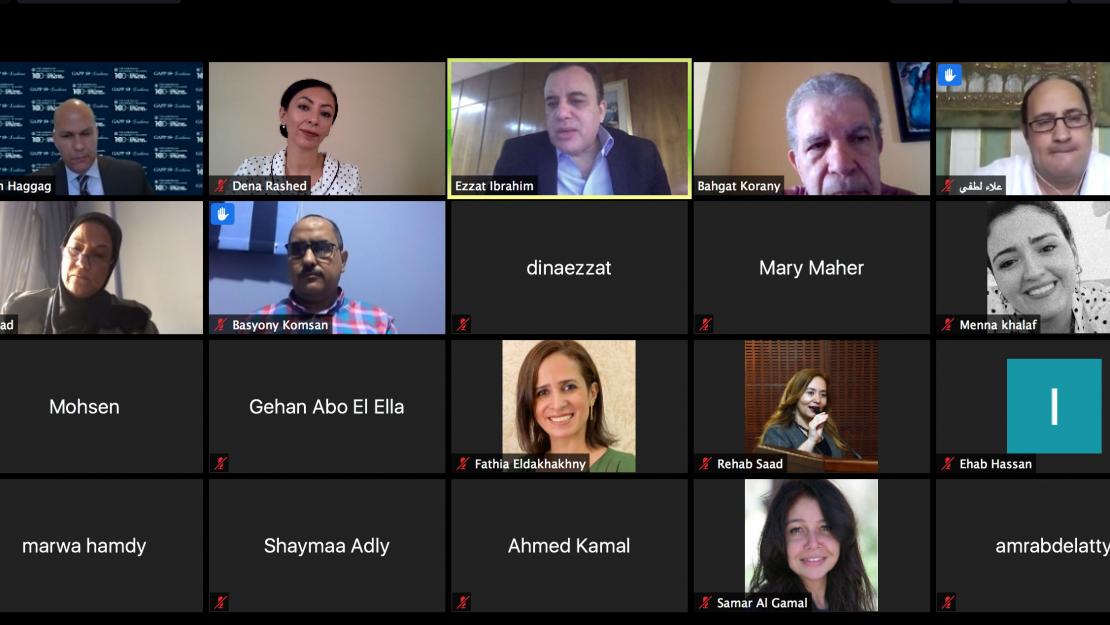 AUC held a Media Virtual Discussion this week titled: “The Impact of the U.S. Elections on Egypt and the Middle East.” Speakers were Bahgat Korany, professor of international relations and political economy at AUC, and Karim Haggag,  Karim Haggag, Middle East Program director and professor of practice at the Public Policy and Administration Department. The discussion was moderated by Ezzat Ibrahim, editor-in-chief of Al Ahram Weekly Newspaper and Ahram Online.

Korany described the American elections as “universal” because of its broad impact on the world. He said that the U.S. presidential race between U.S. President Donald Trump and U.S. Vice President Joe Biden is rather exceptional “due to the polarization not only among the candidates but also within the American society, and it is the first time where the personal characteristics of the candidates heavily affect the course of the elections.”

He said that Trump's political behavior has been confrontational even with his allies during the past four years. The result is a decline of the U.S. image, even within the European Union, he added, "along with an isolationist behavior reflected in a trade war with China, a reduction in the U.S. contribution to the NATO and withdrawal from the WHO." He also said Trump has been adopting a businessman's psychology relying on quick profits, “his first visit was to Saudi Arabia, and his announcement of several deals followed it."

In the Middle East, Korany believes that Trump has succeeded in brokering peace accords between Israel, and the Gulf States and Sudan, “an achievement that many former U.S. administrations attempted but failed to achieve.” He explained that the latest peace accords are different than the Egyptian-Israeli peace treaty, signaling the advent of a new Middle East.

As for the U.S.-Egyptian relations, Korany said it is in a better state than during Obama’s presidency. “Major contentious issues like human rights are not on the agenda. As for the Renaissance Dam, Trump made it clear that Egypt might have a justification to defend its existential right by using a military solution, which many considered as a green light for Egypt to strike the dam. However, the Egyptian leadership has repeatedly stressed that Egypt wants a peaceful resolution on GERD.”

In his remarks, Haggag shed light on the continuity aspect in the American policy in the presence of either a republican or democratic administration and discussed the expected change in policy if Biden wins the presidential race. "The continuing lies in is the declining importance of the Middle East region to the U.S. strategic interests. In contrast, the U.S. has a growing interest in other regions deemed most influential for its strategic interests, especially South-East Asia, which is gaining more importance now in the U.S. national security realm.” He explained that this development has helped redefine the scope of the U.S. interests in the Middle East to a bare minimum. The U.S. traditional interests in the region, as Haggag put them, revolved around securing the oil supply, safeguarding Israel’s security, and ensuring the Arab Gulf region's security. “The priorities are still present in U.S. policy, but they are of less importance in contrast to the threats to the U.S. national security, regarding the issues of weapons of mass destruction and combating terrorism.” He added that this had been the common denominator between the Obama administration's policies and views and that of the Trump administration. A policy that he sees a Biden administration would follow by reducing the U.S. military presence in the region- which currently amounts to 60,000 soldiers- to the 1990 pre-Gulf War presence.

Also, Haggag believes that with a Biden administration, the U.S. will continue to avoid engaging in direct military interventions in long-term political conflicts, in response to widespread internal criticism of the U.S. policy militarization. He also expects that the U.S. will not invest neither politically nor diplomatically in settlement of the various conflicts in the region whether in Syria, Yemen or Libya, and will settle for cosmetic diplomatic moves that will have minimal impact.

However, if the democrats win, Haggag highlighted that there would have to be some differences in the American policy in the region. “A Biden administration will revive negotiations again with Iran in an attempt to reach a new agreement on Iran's nuclear program. The agreement may expand to include additional issues such as the ballistic missiles in Iran’s possession and the Iranian interference in conflict areas in the region, and Biden could use the sanctions imposed by the Trump administration to push Iran to the negotiation table.”

Regarding the Palestinian-Israeli conflict, Haggag expects that there will be a review of Trump's policy towards Palestine, not concerning the U.S. commitment to Israeli security, but with regard to the U.S. alliance with the Israeli right-wing. Haggag said, "We could expect a re-focus on the two-state formula as a basis for reaching an agreement to resolve the Israeli-Palestinian conflict. While we don’t expect a Biden administration to retreat from the decision to move the American embassy to Jerusalem, but we will see steps toward resuming aid to the Palestinian Authority, reopening the Palestinian embassy in Washington and putting greater focus on Palestinian rights.”

Concerning the Gulf region, Haggag believes that the U.S.-Gulf relations may witness a degree of political divergence due to several factors such as reducing the U.S. military presence in the region. “Biden also pledged he would reassess ties with Saudi Arabia, especially with regard to the Yemen war. Currently, there is also pressure on Congress to reconsider the U.S. relationship with the Gulf states, especially regarding arms deals.