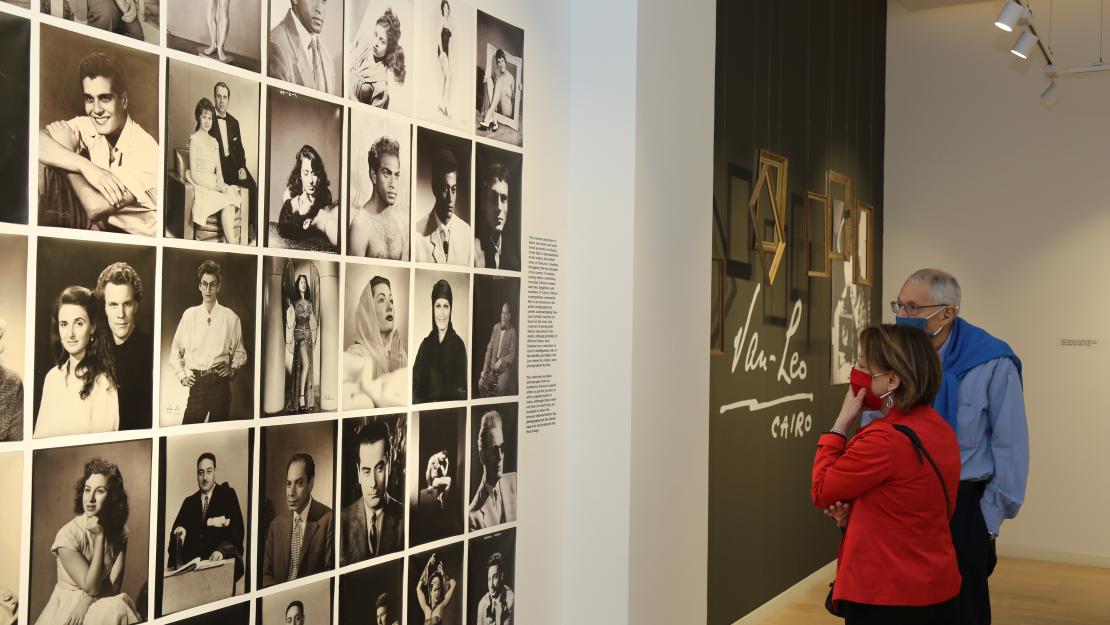 Iconic photographer Van-Leo (né Levon Boyadjian) will long be remembered as a premier figure of 20th-century Egypt. In celebration of what would have been his 100th birthday in November 2021, AUC’s Rare Books and Special Collections Library (RBSCL) showcased his work in an exhibition and is now available in a 3D format, allowing online and offline visitors alike to see his visual legacy for themselves.

Made possible through an AUC collaboration with the American Research Center in Egypt, the digital display is a pioneering initiative at AUC in harnessing tech for cultural purposes and widening viewership.

Van-Leo’s portraits of Egypt’s public figures over the course of several decades, from star actors Omar Sharif, Mervat Amin, and Rushdie Abaza to cultural figures Taha Hussein and Youssef El-Sibai, as well as politicians, will long be celebrated.

Three years prior to his death, in 1998, Van-Leo bequeathed his collection to the University, where it has since been housed at the RBSCL.

The exhibition featured rare photographs of Van-Leo atop the Cheops Pyramid, a selection of his black-and-white tinted portraits showcasing a plethora of Cairo’s vibrant community through to the 1980s, as well as numerous self-portraits where he disguised himself to create dramatic and eccentric looks, including one with a Marie Antoinette bust, two early hand-tinted self-portraits, and images of him dressed as a police or military officer and in Hollywood-style attire.

Having the exhibition available in 3D brought it to life for online audiences, marking another milestone in the library's journey to digitize its collections, in order to share them with the world.

“We want our collections to go out to the public worldwide, in ways that they can access. Even before COVID, it was our choice and desire to [embark on this project]. It just makes sense that, as a pioneering institution, we offer technology blended with knowledge,” says Ola Seif, the RBSCL's curator of Photography and Cinema Collections.

Seif also mentions how the Future Gallery’s Van-Leo exhibition has seen visitors flock to Cairo solely for the occasion, including some of the seminal photographer’s personal friends. There have also been a few high-profile visitors, including diplomats.

Alongside their role in preserving Van-Leo’s collection, the RBSCL is also the curator, copywriter, and owner of the exhibition.

“We are trying to promote this collection to the community, whether they are researchers or art fans,” says Heba Sayed, the Planning, Assessment and Business Development director of Libraries and Learning Technology at AUC.

The Rare Books Library plays a huge role in preserving and archiving varied collections. Some of its notable work includes mapping images of monuments for a digital collection of architectural historian’s K.A.C. Creswell Islamic architecture photography, made possible in partnership with the Barakat Trust.

“What we're doing [at the library] is not just collecting physical material, which of course is the basis for so much heritage research, but we are also generating a new kind of knowledge and digital material. Oral history is one area where we're building collections; these recordings are done in purely digital form, either by our own team holding the interviews or having other projects and outsiders donate… Born digital collections is also an area of photography where we’ve started to make inroads,” explains Stephen Urgola, University Archivist and Interim Associate Dean of the Rare Books and Special Collections Library.

Former TIME magazine photographer Barry Iverson, a friend of Van-Leo’s and authority on his work, was invited for an online interview at the Future Gallery to discuss the life and work of the seminal portraitist.

“His boom years were the 1940s…because these were the war years, you had the military officers, the entertainers, the celebrities…these were also Van-Leo’s most creative years,” explains Iverson, noting how visiting the photographer’s studio once a year was custom among many of Cairo’s most notable figures.

Although the live exhibition date has passed, it is slated to relaunch at the New Cairo campus.