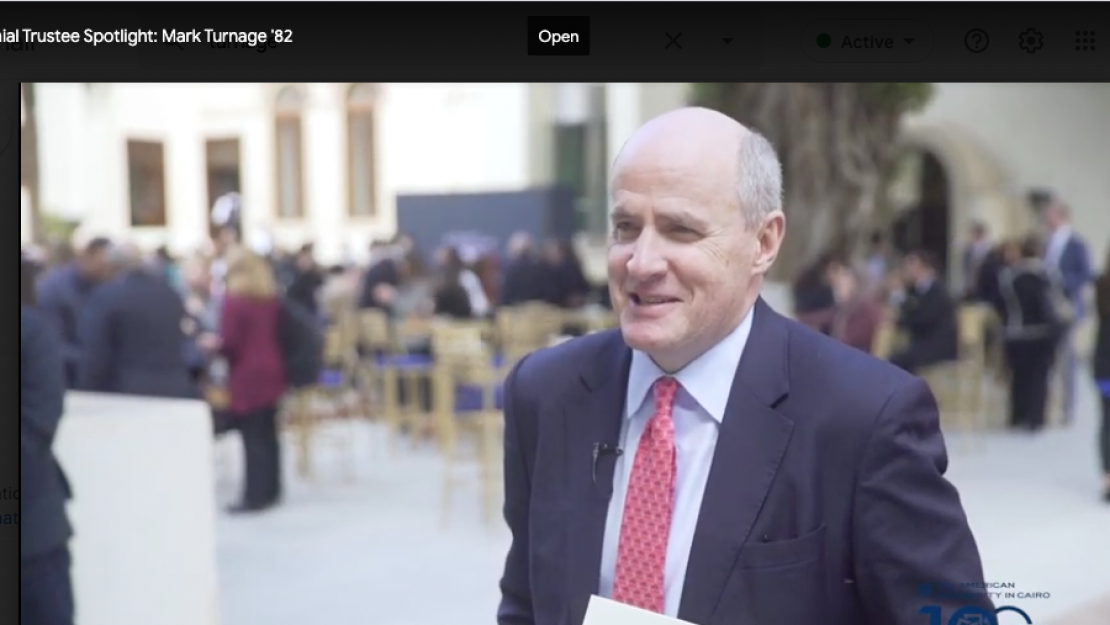 Mark Turnage (ALU ’82), CEO of DarkOwl, was elected chair of AUC’s Board of Trustees, succeeding Richard Bartlett, three-time chair of the Board and first chair emeritus at the University.

“Mark has been an active and deeply engaged trustee since joining the Board, bringing both enthusiasm and energy as an alumnus and business leader,” said Teresa Barger, head of the Trusteeship and Governance Committee that oversaw Turnage’s selection. “We are delighted he has accepted to serve as the chair and look forward to working with him as AUC welcomes a new president and embarks on the next chapter in its history.”

Turnage is no stranger to Egypt and AUC. He studied at the University during his junior year abroad in 1980, after which he decided to remain at AUC to practice his Arabic. His one-year stay at the University extended to three.

“I was a young student. I came here to study Arabic,” reflected Turnage, who also speaks Spanish, during AUC’s centennial celebrations. “I became introduced to Egypt and the broader Arab world. … [AUC] had a great impact in introducing me to the region, and I have stayed involved in the region since.” Watch the full video here.

Looking forward to his new role, Turnage said, “I am honored to lead the Board of such a great University that has contributed to Egypt and the world through the education it provides its students — a testimony to the power of liberal arts,” said Turnage. “I admire Richard Bartlett’s distinguished and talented leadership over the years and will build on it as we work together as a community to continue to advance AUC into its second century.”

In addition to leading DarkOwl, a Colorado-based company that provides a dark net threat intelligence platform to allow companies and organizations to recognize, understand and mitigate their digital risks, Turnage is tech and telecom adviser to Blackstone Entrepreneurs Network Colorado and was senior adviser to the Colorado Impact Fund. A private investor in technology, software and manufacturing startups, he served at the helm of various cybersecurity companies. Previously, he was a consultant with McKinsey & Company as well as a practicing attorney with Davis Graham & Stubbs. Turnage holds a JD from Yale Law School, an MA in philosophy, politics and economics from the University of Oxford and a BA (summa cum laude) in international affairs, African and Middle Eastern studies from the University of Colorado Boulder.

A trustee since 2003 and elected chair in 2010, 2013 and 2018, Richard Bartlett, managing director of the New York-based Resource Holdings, will continue his longtime support of AUC as a member of its Board of Trustees and chair emeritus. “My time with AUC began as a child, and the University will forever be immensely important to me,” said Bartlett. “I am grateful to Mark Turnage for his service to the Board, bringing keen insights, expertise and a deep commitment to the University’s mission. The last decade has been consequential for Egypt and AUC, and the University is well-positioned in Egypt’s evolving higher education landscape. I intend to continue working with Mark and my fellow trustees to build on AUC’s strong legacy as a positive force for Egypt and the region.”