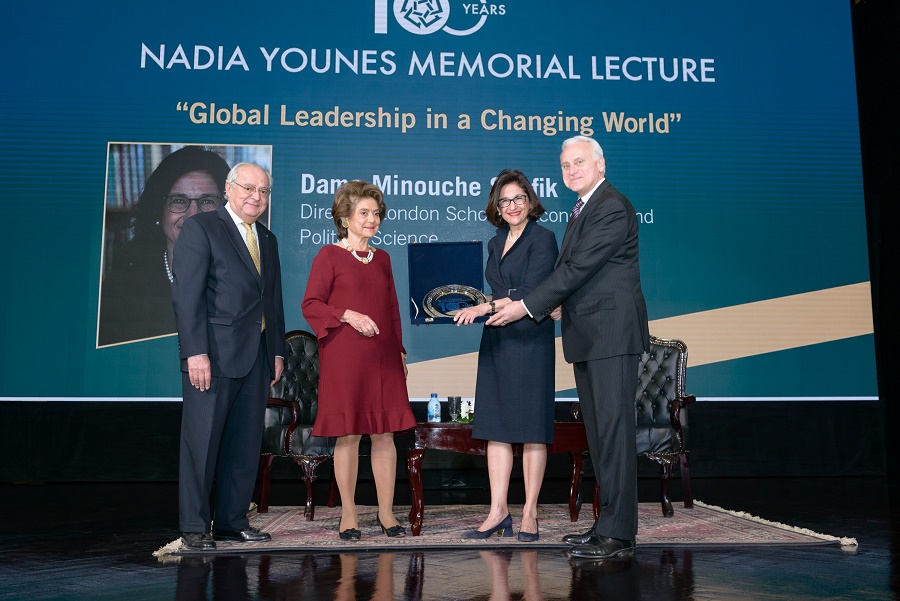 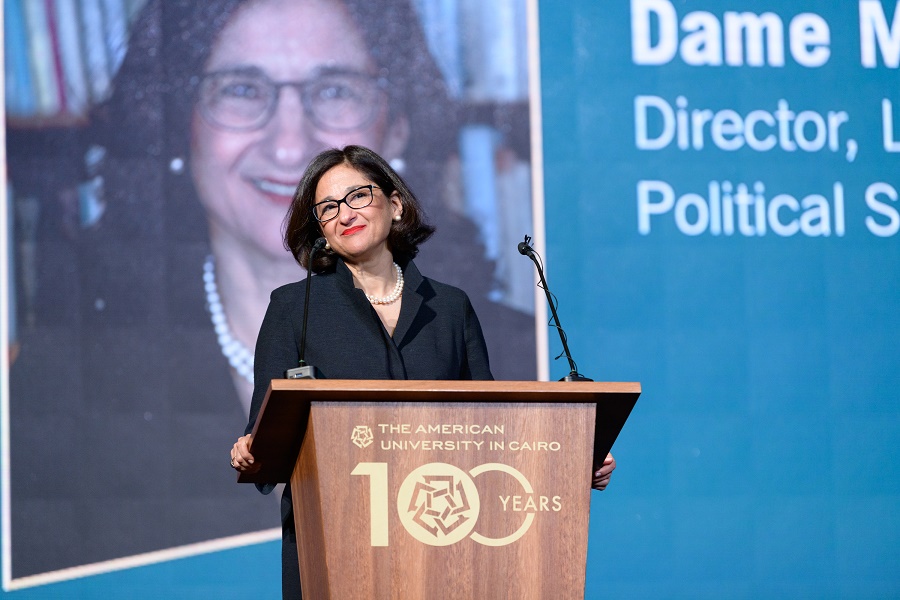 The American University in Cairo (AUC) hosted yesterday the annual Nadia Younes Memorial Lecture featuring Dame Minouche Shafik, director of the London School of Economics and Political Science (LSE) and the first woman in the school’s history to hold this position. Dame Minouche shared reflections from her career spanning global finance, development economics and academia at the lecture.

Highlighting how much of one's success is a result of luck versus effort, Shafik discussed factors such as the family a person is born into, one’s country or city of birth, and neighborhood schools and teachers. However, she noted that: “The answers to these questions vary enormously over time and place, but there are also huge public policy questions because so much of what the government is supposed to do is to help those who've been unlucky in life to have a fair chance.”

Shafik discussed the social contract that is the webs of obligations and opportunities that hold our societies together. “By social contract I mean the rights and obligations of citizenships, the payment of taxes in exchange of public goods, the promise that society gives for social mobility to those who work hard,” she added.

Shafik shared valuable personal lessons and stories to demonstrate the value of education in guaranteeing social mobility and the role of luck and effort in advancement. After her father’s losses during the nationalization phase in 1960s, she mentioned how as a family, they all started from scratch in USA. “When I was growing up he would always say to us they can take everything away from you except your education. And so he placed huge emphasis on us working hard and taking our education very seriously.” She added: “We were immigrants when we went to the US and no doubt my family faced discrimination. But we were also allowed to get on and take advantage of the opportunities that were there.”

Shafik said: “I strongly believe that talent is spread evenly around the world but opportunity is not. Which is why I spent so much of my career in fields like international development and education which are about spreading opportunity to others,” she added. She explained that she was also able to advance her career in organizations that made decisions on the basis of merit and where connections were not the key to advancement. “I've also had some very good bosses who gave me the opportunity to grow. And for me that combination of climbing the ladder of educational quality and meritocratic organizations enabled social mobility.”

Through the theme of luck versus effort, Shafik discussed Egypt’s case, saying “contrary to popular perception, inequality in Egypt is actually quite low by international standards in part because states in the Middle East have tended to be highly redistributive.” She also said that the introduction of the cash transfer schemes in Egypt recently Takaful and Karama have been hugely important for making sure that between one and a half and two million families, the poorest families in Egypt, have a minimum income that enables them to spend on things like education and more nutritious food. “But while the gap between rich and poor in Egypt has actually shrunk. The middle class has done relatively worse.” She added: “In the last decade the percentage of downwardly mobile Egyptians has actually exceeded the number of upwardly mobile Egyptians.”

She added, that in such framework luck has become more important than effort in driving success and the prospects of social mobility has actually fallen. “And I believe that's a huge driver of the observed decline in life satisfaction that we see in many polls in Egypt,” she added.

On her second theme of the talk: leadership, she stressed that great leaders inspire, encourage, enable and build great leaders around them. She said: “I definitely don't need to be the smartest person in the room and it's much more fun to have people who are more clever than me on my team and I also want people who are different than me and who think differently than me.

She concluded by sharing lessons from her life, “success in life as a result of a combination of luck and effort. And as I tell my children incessantly if you got lucky in the lottery of life, you need to do something for those who are unlucky. That can be at an individual level through charity through paying taxes. Social mobility is what gives people especially young people hope.”

Shafik noted that in most societies social mobility has declined in recent decades. “I think much of the current malaise we see in countries like Egypt, in the United States, in the United Kingdom is because of that. Spreading opportunity through education, throughout life, fairer job opportunities and more real competition, is probably the biggest social challenge that we face. But addressing it is also vital for our economic success. Since getting the most out of our talent is the path to greater prosperity.”

Shafik serves as a trustee of the British Museum, the council of the Institute for Fiscal Studies, the governor of the National Institute for Economic and Social Research, and is an honorary fellow of St. Antony’s College Oxford. With an illustrious career in economics, public policy and academia, Shafik has previously served as the vice president of the World Bank, permanent secretary for the Department for International Development, deputy managing director of the International Monetary Fund, and deputy governor of the Bank of England. Shafik was made a Dame Commander of the British Empire in the Queen’s New Year’s Honors list in 2015 and holds honorary doctorates from the University of Warwick, the University of Reading, and Glasgow University.

The lecture was part of the Nadia Younes Memorial Fund, which was established in honor and memory of Nadia Younes, who was tragically killed in the bombing of the United Nations headquarters in Baghdad on August 19, 2003, while she was serving as chief of staff to Sérgio Vieira de Mello. In addition to the annual series, the fund has helped establish the Nadia Younes Conference Room, which serves Cairo International Model United Nations members and the Nadia Younes Award for Public and Humanitarian Service.