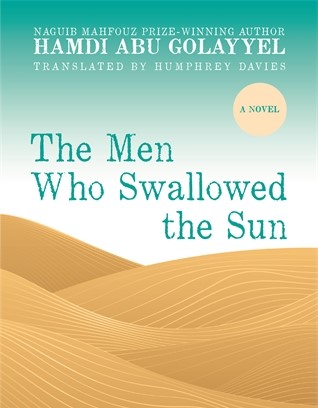 Hoopoe, an imprint of AUC Press, has just released Hamdi Abu Golayyel’s The Men Who Swallowed the Sun, translated from the Arabic by Humphrey Davies. Compelling and visceral, with a seductive, muscular irony, this is a novel of two men and their fellow migrants, and the extreme marginalization that drives them.

Hamdi Abu Golayyel is an Egyptian writer and a journalist, born in Fayoum. He is the author of numerous short story collections and novels, including Thieves in Retirement and A Dog with No Tail, which was awarded the Naguib Mahfouz Medal for Literature in 2008.

Golayyel has already received much praise for his previous novels. “A clever and complex meditation . . . full of swift sarcasm . . . an exploration of Abu Golayyel’s Bedouin identity,” wrote reporter, essayist, and book reviewer Ursula Lindsey in Egypt Independent about A Dog with No Tail. Mona Zaki, reviewer and translator of modern Arabic fiction, described Thieves in Retirement as “a great read” while the Library Journal called it “masterful.”

The Men Who Swallowed the Sun follows two Bedouin men from Egypt’s Western Desert who seek to escape poverty through different routes. One—the intellectual, terminally self-doubting, and avowedly autobiographical Hamdi—gets no further than southern Libya’s oasis of Sabha, while his cousin—the dashing, irrepressible Phantom Raider—makes it to the fleshpots of Milan.

The backdrop of this darkly comic story of illegal immigration is a brutal Europe and Muammar Gaddafi’s Great State of the Masses, where Gaddafi fantasizes about welding Libyan and Egyptian Bedouin into a new self-serving political force, the Saad-Shin. Like A Dog with No Tail, The Men Who Swallowed the Sun works at the boundary of memoir and fiction, using experimental prose techniques to foreground the unreliability of the narrator and of memory.