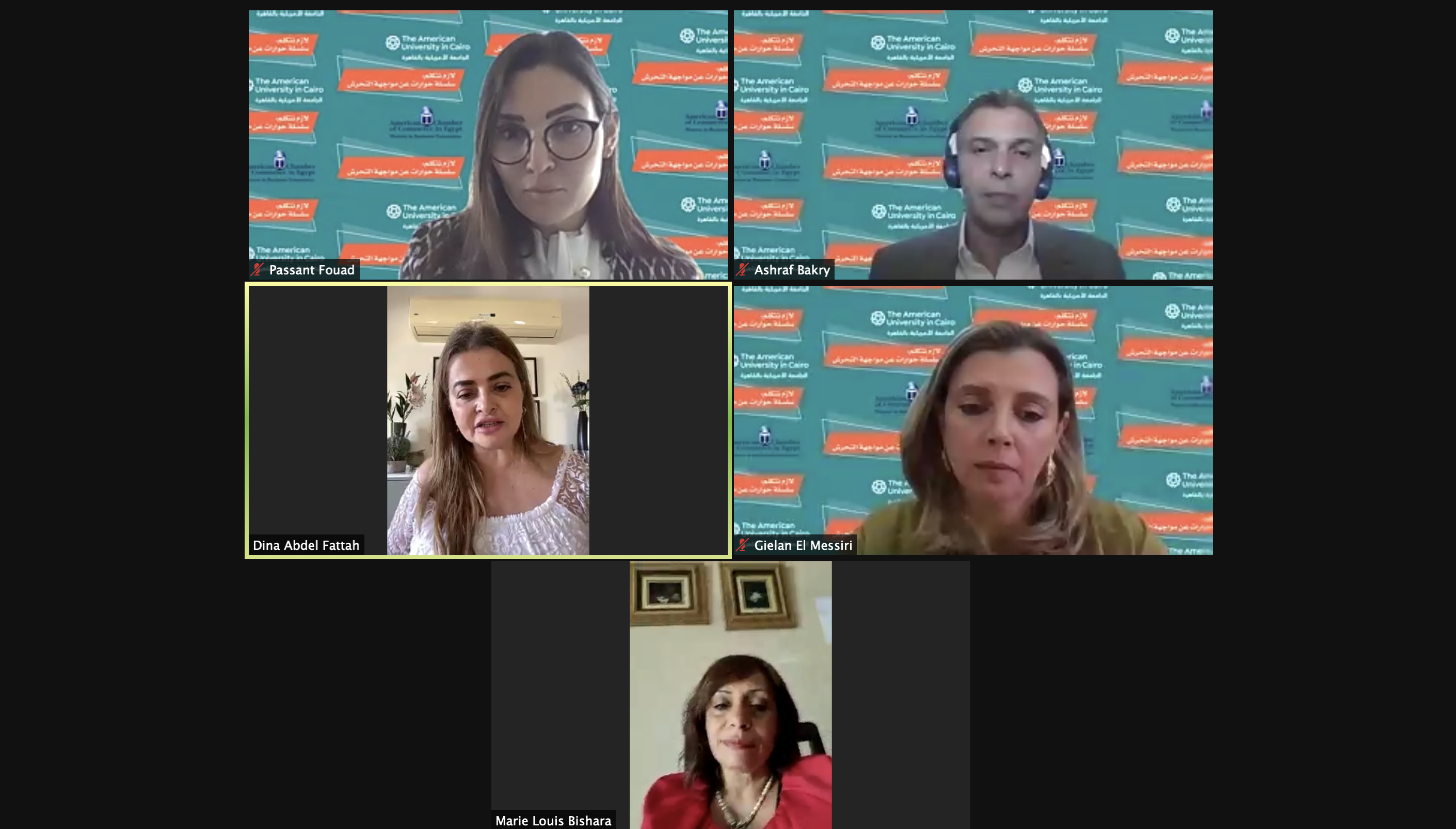 Welcoming the speakers and the attendees, Sherif Kamel, dean of the School of Business and president of the AmCham, said in his opening remarks: "Today's topic is highly significant because it doesn't only affect one person, but it affects all of us, everywhere – whether it's a bank, organization, or university and it requires community awareness and specific mechanisms to address it."

The speakers discussed the recent Egyptian laws protecting women, the obstacles that women still face in the workplace, and the need to continue implementing the laws to ensure a safe and inclusive environment.

Passant Fouad highlighted the findings of a report published by the Egyptian Center for Economic Studies last August, which indicated that while women constitute half of the population, their labor force participation is only 24 percent.

Gielan Elmessiri said that there has been considerable progress in laws related to women in Egypt, "so while we now have equality before the law to a great extent, we still have inequality in the outcome." She explained that while the number of girls' enrollment has increased in the primary, preparatory and university stages, it is followed by a regression when they enter the workforce. She explained that due to gender stereotyping and traditions, girls are brought up believing their primary role is to be mothers, which is, of course, a significant role, but when they decide to take a career path that conflicts with their reproductive role, they will be blamed and shamed. She also added that women perform the vast majority of unpaid care work, affecting their choice of profession. Elmessiri also pointed out that other challenges include gender wage gaps, harassment in the workplace and transportation, and the fact that many women work informally.

She stressed that diversity goes beyond numbers. "Of course, it's important to have a percentage of women of different races, but it's also important to focus on diversity in opinions and perspectives and not just numbers and demographics," she added.

Dina Abdel Fattah also discussed how women who work informally look for better opportunities under tremendous psychological and family pressures, not only in Egypt but in most developing countries, with no fairness in role distribution. Abdel-Fattah said that with Egypt's great efforts and society opening up about harassment, there is currently more space for discussion. Yet, she added that there are still many obstacles to implementing the laws.

Abdel Fattah highlighted the latest efforts of "Enti Qaweya" initiative of the Top 50 Women Forum to support Egyptian women against harassment of all kinds, in cooperation with the National Council for Women and the Ministry of Planning. The initiative works with 350 women from 27 sectors to publish and circulate "the Code of Conduct to Prevent Violence and Harassment against Women in the Workplace". She said: "Currently, we are reviewing the legal procedures and other procedures including maintaining confidentiality of the victims, case evaluation and follow up after the complaint. The complete manual will be ready by the end of this month.” She also added that the Financial Regulatory Authority is the first to adopt the Code.

Sharing a positive outlook, Marie-Louis Bishara said: "I do not see Egyptian women as overwhelmed by obstacles, but I rather see strong women who search and fight for their rights. In the textile industry, women constitute more than 65 percent of the workforce," she said. Bishara, who become the first women to hold the position of president of the Ready-Made Garment Export Council in Egypt, also pointed out the increasing number of female ministers and women in leadership positions in Egypt.

Regarding the provision of a comprehensive and safe environment in the work field, she said: "Since the establishment of our company in 1980, my mother has worked hard to empower women. Any woman who faces harassment files a report, and we start an immediate investigation, and we apply the laws on anyone who violates the work rules."

Both Bishara and Ashraf Bakry stressed that training women is key in providing a positive workplace environment. Bishara's company provided training to women on various topics including anti-harassment. Due to the positive feedback, they are replicating the program in other workplaces related to their factories.

Bakry said: "Ten years ago, we started a strong global initiative to support diversity and gender equality, and in our company in Egypt, 44 percent of the senior managers are females. Also, we appointed the first factory manager in Africa and the Middle East, and currently, a woman runs one of our most important factories." He also discussed Unilever's regular training on anti-harassment, bullying and issues that negatively affect business ethics.

Bakry also discussed how society reinforces the idea that boys are different than girls, "although there is a difference, that doesn't mean that they should differ in rights and responsibilities. When there’s an enabling work environment, we see performance from girls and women that is no less, if not exceeding, the abilities of men. The problem is that we didn’t try this culturally – we’re always convinced that men will lead, but when there’s an enabling environment and laws are there and we give women an opportunity, we find and we see miracles happening."

AUC launched the "AUC SpeakUp Dialog Series" last November to raise awareness about sexual harassment as an important social issue and support national and global efforts related to college campuses. The series will address the "Legal framework and violence against women" next month.