AUC Celebrates the Inauguration of Ahmad S. Dallal as the 13th President of the University 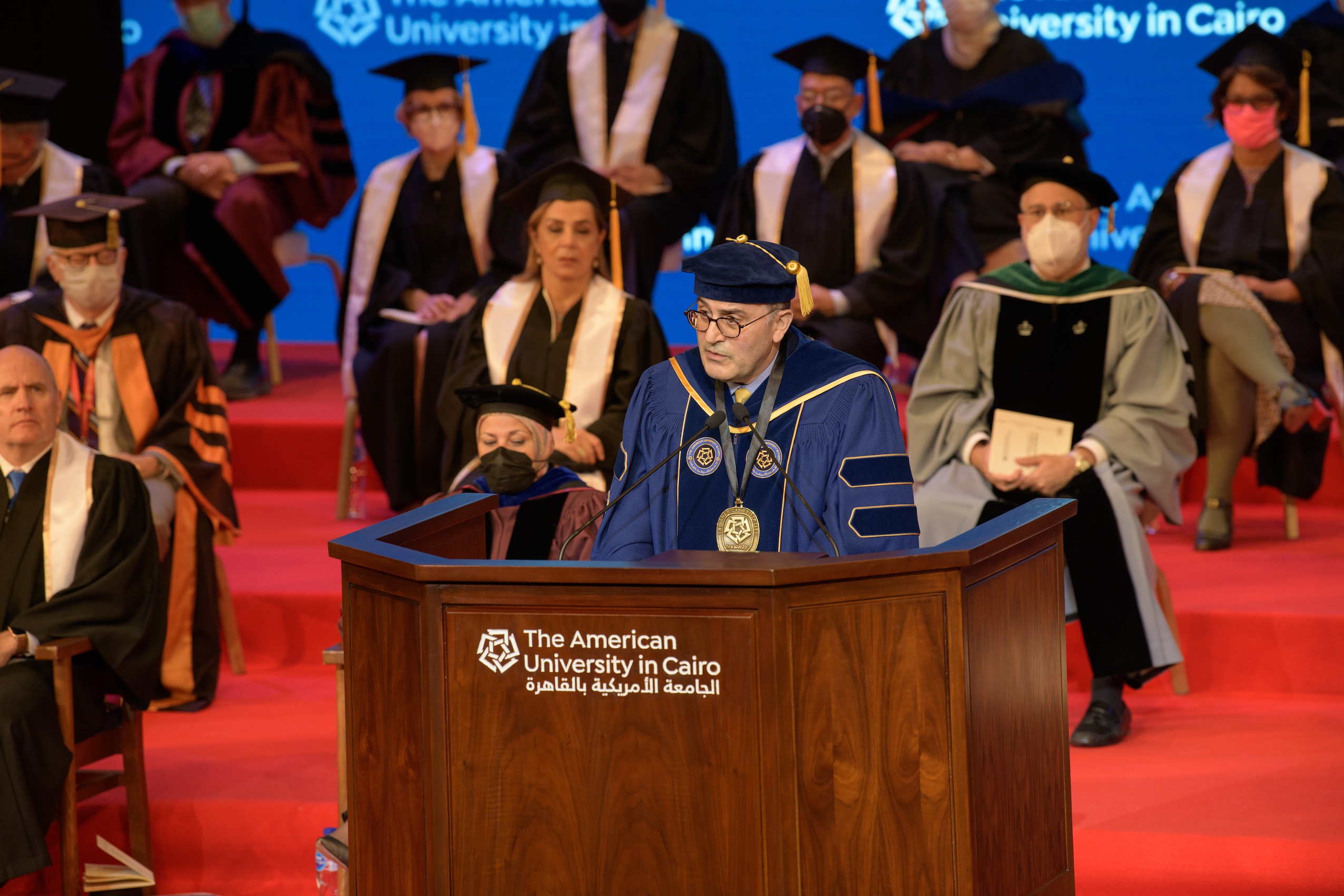 The American University in Cairo (AUC) celebrated yesterday the inauguration of Ahmad S. Dallal as the 13th President of the University at AUC New Cairo campus. The ceremony was attended by senior Egyptian government officials, Egyptian and international dignitaries, Egyptian and regional university presidents, members of AUC’s Board of Trustees (BOT), former AUC presidents and AUC faculty members, students, and staff.

The inauguration ceremony included a welcome speech by Mark Turnage, chairman of the BOT, a speech by Khaled Abdel-Ghaffar, Egyptian minister of higher education and scientific research, and an inaugural address by President Dallal. A campus parade for the AUC community followed the formal inauguration.

In his speech, Turnage said: “This is a very special day for our institution. Inaugurating a new president is a cause for celebration and a chance to reflect on a powerful legacy and a promising future ahead. It’s an opportunity to reaffirm our core values and renew our commitment to AUC’s fundamental mission of service to Egypt and education and research at the highest caliber.”

Turnage noted that President Dallal’s academic and administrative acumen, inclusive leadership style, and deep sense of purpose will advance the University and its mission as it navigates an increasingly changing higher education landscape.

“Like AUC itself, he is rooted in the region and fully American in experience and expertise. Not only is he from the region, more importantly, President Dallal studied it and understands the history, the culture, the challenges, the ambitions, and the complex nuances,” added Turnage.

The first Arab American to lead the University, Dallal is a prominent scholar of Islamic Studies. He served as dean of Georgetown University in Qatar; provost of the American University of Beirut; and professor at Smith College, Yale, Stanford, and Georgetown, where he was also chair of the Department of Arabic and Islamic Studies.

Minister Abdel-Ghaffar highlighted AUC’s significant contribution to Egyptians’ lives in the past century through its liberal arts education, scientific research, community service, activities, dissemination of knowledge, and societal welfare. He said: “Today, we celebrate the University’s distinctive community and century-long achievements, and we also look to the future, welcoming president Ahmad Dallal to Egypt in his new mission to usher a new centennial of excellence, innovation, and service. I am excited about AUC’s plans to enhance the University’s social and educational position in Egypt, the region, and globally.”

Abdel-Ghaffar also expanded on the history of collaboration between the Ministry and AUC on development, research, capacity building, and partnerships. “Partnering with institutions is like friendships with individuals; they are built on shared values, and there can be no doubt that AUC and the Ministry share important values and the same common mission. With this new leadership, we believe that the upcoming period is full of promises, and we are all eager to see it succeed, expand, and endure.”

“In light of the global changes affecting higher education, accentuated by the dramatic developments of the last two years, we must now ask more of ourselves. We must put added emphasis on service, on serving our families, communities and societies, and indeed on striving to make the world a better place,” he said.

Dallal envisions dedicating AUC’s next century to the collective investment in educational innovation. “One of the hallmarks of AUC’s academic excellence over the years has been its commitment to a strong, holistic liberal arts education, but as we collectively hone our vision for the future, we will need to redefine what a liberal arts education means in the 21st century, especially after the pandemic.”

AUC stands on solid ground, Dallal emphasized, because of its heritage, reputation, quality education, vibrant community, and location in Egypt — the heart of the region and Africa.

Looking into the future, Dallal not only sees the opportunities but intends to embrace the challenges ahead. “We will need to rethink our priorities as we embark on our second century of education and service.”

Dallal said: “In the days ahead, we will chart our future together, and we will decide collectively on the new fields in which we can and should make meaningful contributions. To name just a few, we will build our contributions to the fields of data science and artificial intelligence; urban studies; environmental studies; the water, food and energy nexus; and the range of cultural studies in a country which has contributed so much to human civilization.”

Dallal stressed the need to contribute to the education of mid-career professionals, who find that they must reinvent themselves to serve the growing economy. He also emphasized the need “to explore partnerships with sister educational institutions in Egypt, regionally and globally, to maximize our collective impact in the service of our societies. We must also expand our partnerships with industry and the public sector to help provide solutions to real-life problems.”

The inauguration was preceded on Sunday by a series of academic panel discussions as part of the inauguration program. Distinguished panelists addressed some of the most pressing issues of our time, from data science and Artificial Intelligence to meeting the challenges of sustainability, global health and human ecology, and migration and refugees in our region.