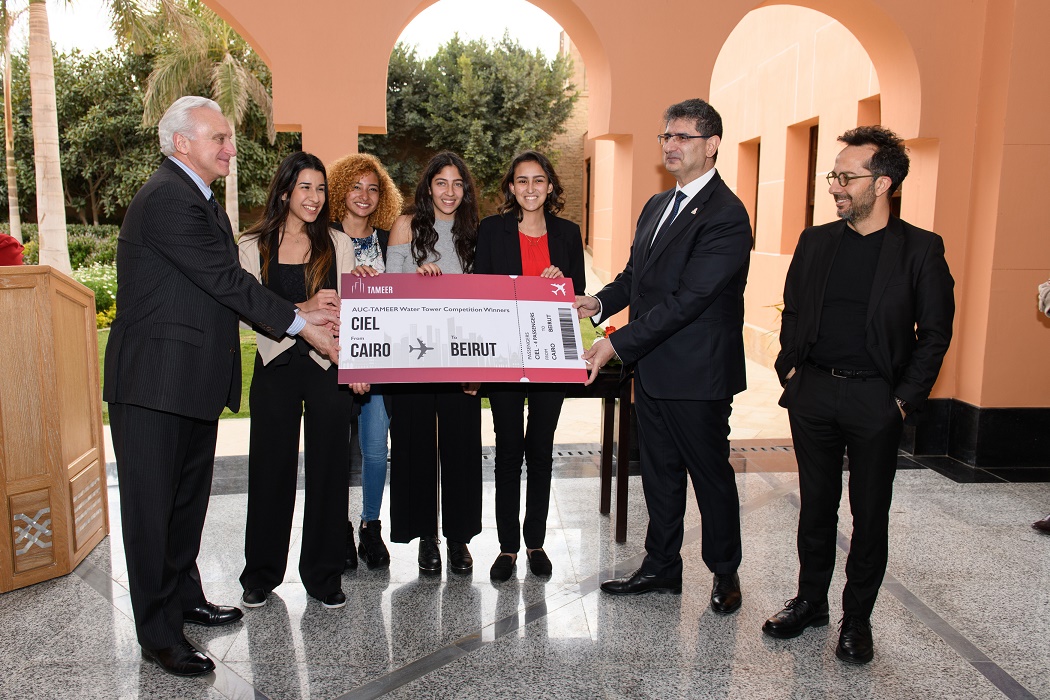 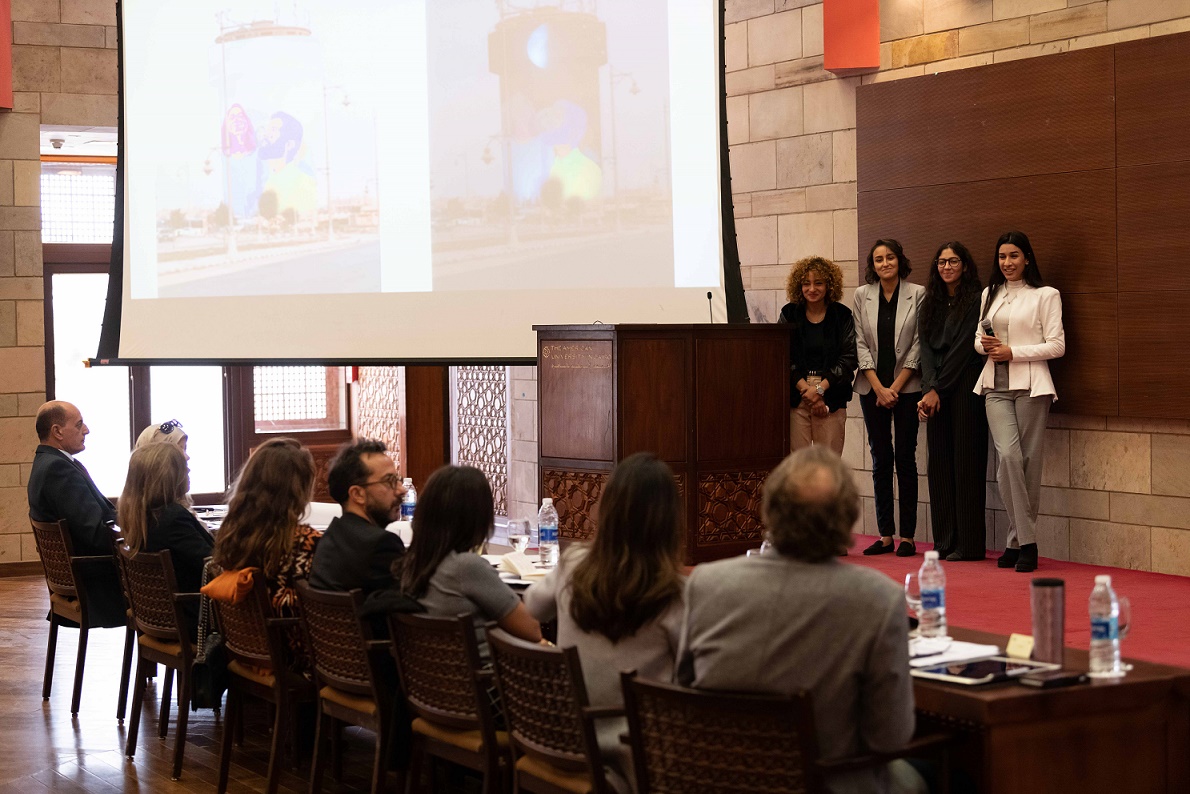 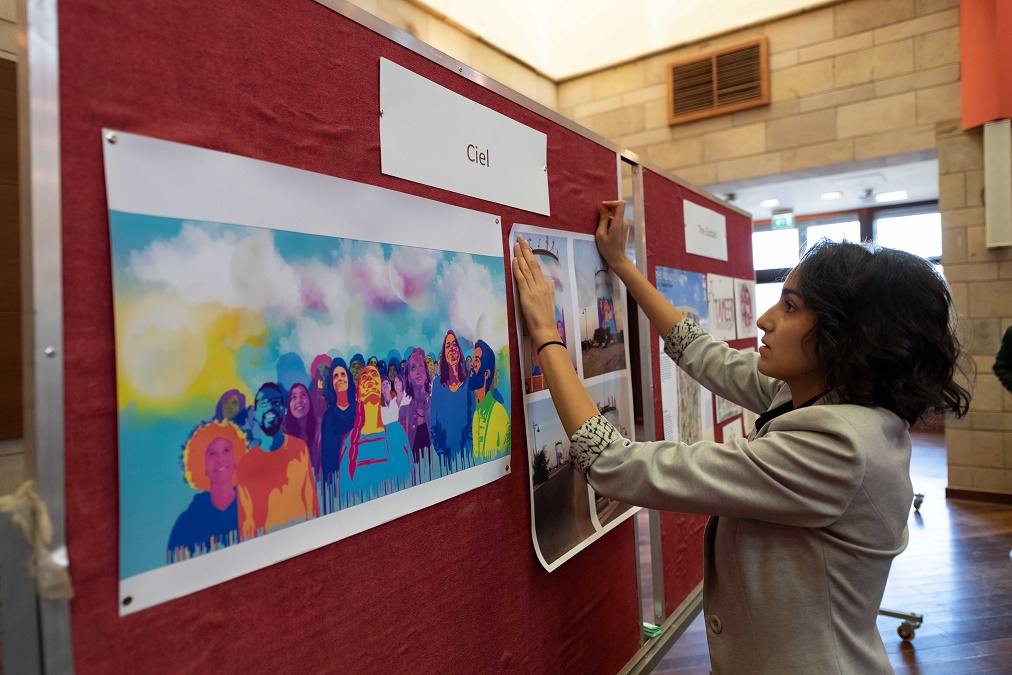 The American University in Cairo (AUC) announced the graphic design student team that won the AUC-TAMEER Water Tower Competition. Team “Ciel” with students Ghenwa Yehia ElMougy, Farah Habib, Nehal Ezz and Mariam Ismail won the competition with their design of a dream-like sky. Their creative interpretation will soon decorate Egypt’s first beautified water tower, which will serve as a monument for AUC and a landmark for the whole New Cairo neighborhood. Reflecting the latest trends in the world of architecture and design, this innovative project allowed AUC students to be the designers of the project for the water tower. The competition was run by AUC in partnership with TAMEER, a real estate development company that will work with the University to make the students’ design a reality.

TAMEER rewarded the winning team with an educational trip to Beirut under the mentorship of Solidere, an urban development company responsible for most of the reconstruction of Beirut’s central district after the war. The trip will include a mini-internship and shadowing opportunity with the TAMEER. “The trip to Beirut is intended to encourage students to explore art and architecture in a different country,” said Soha Hassan, experiential learning manager at AUC's Career Center.

Ciel’s design was ultimately selected for its creativity, technical feasibility and compliance to budgetary restraints. The challenge gave students the opportunity to work in a cross-disciplinary setting, applying their knowledge of design, marketing and architecture to a real-world situation. The contestants had to grapple with creating a realistic, affordable and engaging design that reflected the values of the New Cairo community in a short-time frame.

Antoine El Khoury, managing director of TAMEER, said: “We will turn this functional structure into street art that has a soul,” he stated. “Today TAMEER will take over your dream and make it reality.”

One of the members of the winning team, Mariam Ismail, said: “When we first started the competition we didn’t really think we had a shot we just said, let’s try it out,” continued. “There were a lot of moments where we said ‘oh let's give up, we’re not going to win.’”

“We are all design students so we got some background in architecture through this and we learned a lot,” Nehal Ezz affirmed.

Seven teams submitted their original designs at the first exhibition for the competition, which was held last December, and three finalist teams were chosen. The two other finalists were given a cash reward and honorable recognition by TAMEER. "Colors of Life,” with team members Haidy Helmy, Mostafa Ahmed and Merhan Amer; was awarded “best story,” for their design, and “HRSH Architects,” with team members Rana Abdelkhalek, Hana Elshiaty, Hady Eissa and Sana Soliman, were awarded “best architectural design” for their submission. The competing teams were academically diverse, including students from a variety of fields such as engineering, business, graphic design, architecture and marketing.