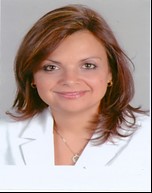 Jasmin Fouad is an associate professor of economics and finance at the Department of Management, School of Business, The American University in Cairo (AUC).

She has worked as a training manager at the Egyptian Banking Institute (2004-2006) and as an economic advisor to the chairman of the National Postal Office (2006-2007), and advisor to the chairman of the Egyptian Financial Supervisory Authority (2009-2011). She was the deputy manager of the International Relations Office at the Faculty of Economics and Political Science (2013-2014) and the manager of the Center for Economic and Financial Research and Studies during the period (2014-2016). She was the academic coordinator of the Professional Master in Gender and Development at Cairo University and the manager of the women’s unit (2016-2019).

She is a consultant to numerous international entities in Egypt ( UNDP, ILO, and UNESCO). She is also a member of Cairo University’s committee on the national anti-corruption strategy and a member of the Economic Committee of the Ministry of Culture, Egypt.