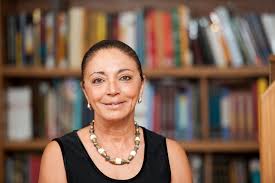 Samia Mehrez obtained her BA and MA degrees at The American University in Cairo (AUC) and completed her PhD at University of California, Los Angeles where her dissertation focused on the works of the late Egyptian novelist Gamal al-Ghitani. She taught at Cornell University from 1984 to 1990 in the Department of Near Eastern Studies before she came to AUC. She currently teaches modern Arabic literature in Arabic and in translation, as well as courses on translation studies and theory in the Department of Arab and Islamic Civilizations. She is the founding director of the Center for Translation Studies at AUC.

She has published widely in the fields of modern Arabic literature, postcolonial literature, translation studies, gender studies and cultural studies. She is the author of Egyptian Writers between History and Fiction: Essays on Naguib Mahfouz, Sonallah Ibrahim and Gamal al-Ghitani, AUC Press, 1994 and 2005 and Egypt’s Culture Wars: Politics and Practice, Routledge 2008, AUC Press 2010. Her edited anthologies A Literary Atlas of Cairo and The Literary Life of Cairo in which she has translated numerous Egyptian writers are published by AUC Press 2010, 2011 and in Arabic at Dar Al-Shorouk, Cairo. She is the editor of Translating Egypt’s Revolution: The Language of Tahrir, AUC Press 2012 and has translated into English Mona Prince’s memoir of Egypt’s January 2011 uprising entitled Ismi Thawra (Revolution is My Name, AUC Press 2014).