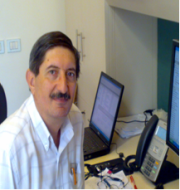 Hassanein H. Amer is a professor in the Department of Electronics and Communications Engineering at The American University of Cairo. He was the founding chair of the department, serving from September 2004 through August 2008.