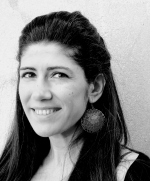 Ghalia Elsrakbi is a design professional, researcher, and design educator. After obtaining a master's degree in design at the Sandberg Institute, Gerrit Rietveld Academie in Amsterdam, she joined the post-academic interdisciplinary program Design Negation at Jan van Eyck Academy in Maastricht where her research was dedicated to the investigation of populist politics from the perspective of design and theory.

In 2009, she co-founded South African designer Lauren Alexander Foundland Collective, an art, and design practice based in Amsterdam. Foundland’s projects explore under-represented political and historical narratives by working with archives via art, design, writing, educational formats, video making, and storytelling. It aims to critically reflect upon what it means to produce politically engaged work from the position of non-Western artists working between Europe and the Middle East.

She is a co-founder and the Artistic Director of Cairotronica, Electronic and New Media arts festival in Cairo, a jury member for the Hybrid Art category for Prix Ars Electronica in Linz, Austria. Ghalia  has lectured and exhibited widely in Europe, the United States and the Middle East including Centre Pompidou in France, The Rotterdam International Film Festival in the Netherlands, ISPC in New York, Ars Electronica, Linz in Austria, IMPAKT Festival the Netherlands, London Art Fair in the United Kingdom, Beursschouwburg, Brussels, Fikra Design Biennial in the UAE, Porto Design Biennial in Portugal, Amman Design week in Jordan.

Elsrakbi was awarded the Smithsonian Artist Research fellowship in 2015/2016 for research in the Faris and Yamna Naff Arab American Collection at the Smithsonian's National Museum of American History in Washington DC and was shortlisted for the Dutch Prix de Rome prize in 2015 as well as the Dutch Design Awards in 2016.