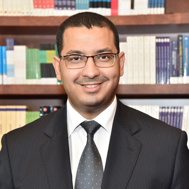 Abdelnaser is an assistant professor of chemistry at the School of Science and Engineering of The American University in Cairo. Abdelnaser received his bachelor of pharmacy (BPharm) degree from Ajman University, Ajman, United Arab Emirates in 2006 and his MSc and PhD from the University of Alberta, Edmonton, Alberta, Canada in 2008 and 2013, respectively. Following this, he worked as a post-doctoral associate at the University of Alberta for three years. During his graduate and post-doctoral studies, Abdelnaser received several universities, provincial and federal awards and scholarships. He has published over 40 peer-reviewed articles in international journals and a similar number of abstracts in local, regional, international meetings and conferences.