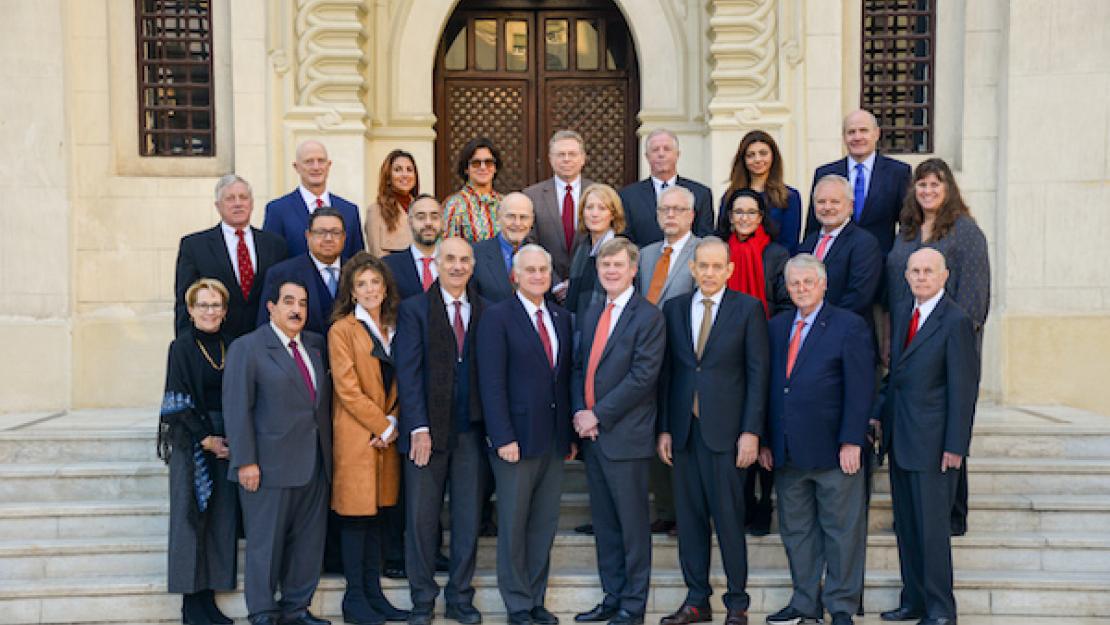 AUC’s Board of Trustees Cairo meeting this month coincided with the University’s centennial celebration kickoff and the inauguration of the Tahrir Cultural Center, as well as the public launch of AUC’s Centennial Campaign: A New Century of Impact, in honor of the University’s 100th birthday. The campaign has currently raised 70 percent of its $100 million target.

“We are here to recognize a history of service that would not be possible without the generosity of our donors, who have allowed us at AUC to open our doors to bright, ambitious students from all walks of life,” said Richard Bartlett, chairman of the Board of Trustees, at the Centennial Campaign reveal, hosting some of AUC’s top supporters as well as scholarship and fellowship students.

During their stay in Cairo, members of the Board of Trustees met with Egypt’s President Abdel Fattah El-Sisi, who commended AUC’s role “throughout its history in serving the Egyptian education sector and society ... and its contribution to the country’s educational and research systems and role in fostering closer relations between the Egyptian and American people,” according to Ahram Online. The trustees also visited the New Administrative Capital and attended a session with developers and officials from the New Cairo municipality, discussing the future of our New Cairo neighborhood and how all sides collaborate to create a stronger community.

On both campuses, the trustees discussed long-term strategic campus planning and the AUC experience. They spent a full day on the New Cairo campus taking tours, attending a lunch with students, and meeting faculty and staff. They visited the athletic facilities and select classes and received an update on AUC's dashboards. The trustees also issued a statement to the AUC community.

A new trustee was also elected at the meeting: Laurie Fitch, partner in the Strategic Advisory Group at the London-based PJT Partners, which provides advisory and capital raising solutions.

President Ricciardone noted how the establishment of the Tahrir Cultural Center marks a new chapter in AUC’s history: “Today, Egypt can be, should be, really must be, at a point of renaissance, … and AUC must be at the heart of that revival — working to re-establish Umm El Donia as the cultural magnet it has always been, ensuring that the best minds in this region are equipped with the education that they need for the lives of service which our alumni have always led, and spearheading impactful research to address the most pressing challenges of our time.”

Bartlett emphasized the importance of reflecting on AUC’s past, but also focusing on its central mission, which has allowed it to endure and will ensure a new century of continued impact and excellence. “At every critical stage in AUC’s history,” he noted, “people — Egyptians, Americans, Arabs — have recognized that AUC is a positive force for Egypt and the world. AUC has flourished because its mission responds to society’s needs. … Knowledge of AUC history inspires reverence for its mission. Let us remain true to that mission, and our next century will take care of itself. … Happy birthday, AUC.”