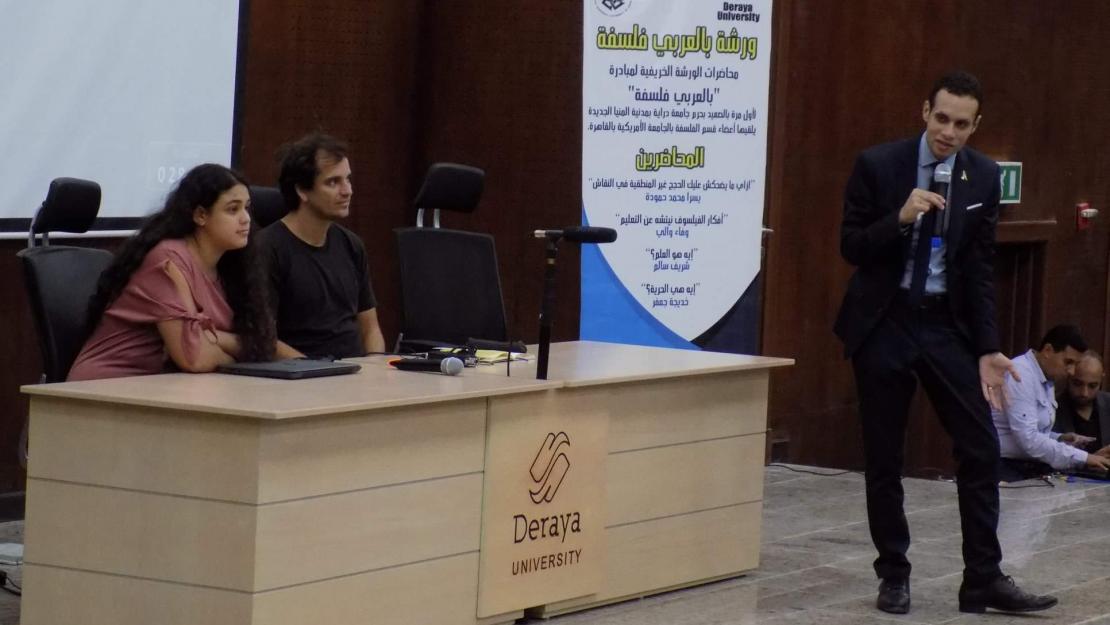 Widely recognized as a hub for cultural and artistic expression, AUC’s School of Humanities and Social Sciences (HUSS) recently received a $50,000 grant from the Andrew W. Mellon Foundation to fund a series of teaching, research and outreach programs for strengthening public humanities and civic discourse.

Bel Arabi Falsafa (“philosophy in plain Arabic”) is a public humanities venture designed to democratize access to philosophy and change popular perceptions of it not just in Egypt, but also in the Arabic-speaking world as a whole. Its purpose is to bring philosophy to a non-specialist audience, demonstrating the relevance of philosophy and philosophical methodologies to matters of both private interest and public concern.

The name of the initiative—Bel Arabi Falsafa—points to one of the project’s central goals, which strives to combine philosophy and plain speaking –– concepts that are often considered incompatible in the contemporary Arabic-speaking world.

The goal for the coming year is to host events at cities in the Nile Delta and Upper Egypt. The long-term aim is to establish a visible, active and sustainable presence in Egypt beyond the greater Cairo metropolitan area. Over the next 10 years, Bel Arabi Falsafa events are envisaged to be held in three different governorates every year. The project organizers hope to establish self-sustaining Bel Arabi Falsafa-type events across the MENA region.

The project will also create an online database of curated intellectual content, a portal through which the public may access videos, webinars and Arabic translations of philosophical texts (particularly contemporary philosophical texts, of which only a scant few have been translated) with commentaries. This online repository is intended as a supplement to the ongoing public outreach programs that allow people, who might otherwise not have access, an entry point into the academy.

There are numerous perceived benefits to this initiative, including minimizing the perception that philosophy is inherently Eurocentric by preparing students to re-enter English-speaking classrooms with a newfound awareness of how philosophical concepts—especially concepts from contemporary philosophy—can be translated back into their own colloquial idiom and cultural context. Hence, Bel Arabi Falsafa envisions contributing to the teaching and study of philosophy by encouraging AUC’s philosophy classrooms to be more broadly inclusive and bilingual through the example and leadership of its speakers, most of whom are themselves recent graduates of the Department of Philosophy.

The project aims to bring philosophy to a larger audience as well as strengthen the ties between AUC students and the wider community and its concerns, changing perceptions about the field and demonstrating its universal applicability and relevance.

According to Robert McIntyre, assistant professor in the Department of Philosophy, postdoctoral teaching fellow and project director, participants at Bel Arabi Falsafa events should walk away from the public conversations and lectures with a greater appreciation for the relevance and usefulness of philosophical modes of discourse to their daily lives. The role of speakers and workshop leaders in this project is to place the tools and methods of rigorous philosophical investigation into the hands of the public and to disseminate scholarly knowledge as widely as possible.

“There is a need, globally, to enhance the quality of civic discourse through sustained public philosophical activity. We can grow and nurture a respect for a diversity of opinions, the willingness to listen to dissenting points of view and intellectual integrity,” McIntyre said.

As Bel Arabi Falsafa expands beyond Egypt, AUC’s model will provide an example to instructors in other universities in the MENA region, showing how to engage students in the active construction of philosophical learning. Even at universities that do not have robust graduate and undergraduate programs in philosophy, the Bel Arabi Falsafa model can still be successfully implemented as a teaching tool, McIntyre explained.

Bel Arabi Falsafa is a largely student-led initiative, and the founding members of its planning committee include many uniquely dedicated former and current graduate students: Yossra Hamouda, Hussein Barrada, Wafaa Wali, Sherif Salem, Wassim Sabry and Khadeega Gafar. As McIntyre noted, the initiative provides an opportunity for AUC graduate students involved as lecturers and speakers -- researching, writing and delivering workshop and lecture content and engaging in constructive debate with members of the general public -- to enrich their own educational experience and contextualize philosophical knowledge in a hands-on way.

Mcintyre believes that philosophical engagement is undeniably an essential feature of critical thinking and that it is a primary goal of post-secondary education to cultivate skillful critical thinking. "When students engage their own community by leading and participating in long-form philosophical debates and workshops, they inevitable sharpen their own critical abilities," he explained. "They will discover
that philosophy, though lampooned as idle wordplay—a parlor game for an elite few—is, in fact, at the very heart of human progress and the human experience."