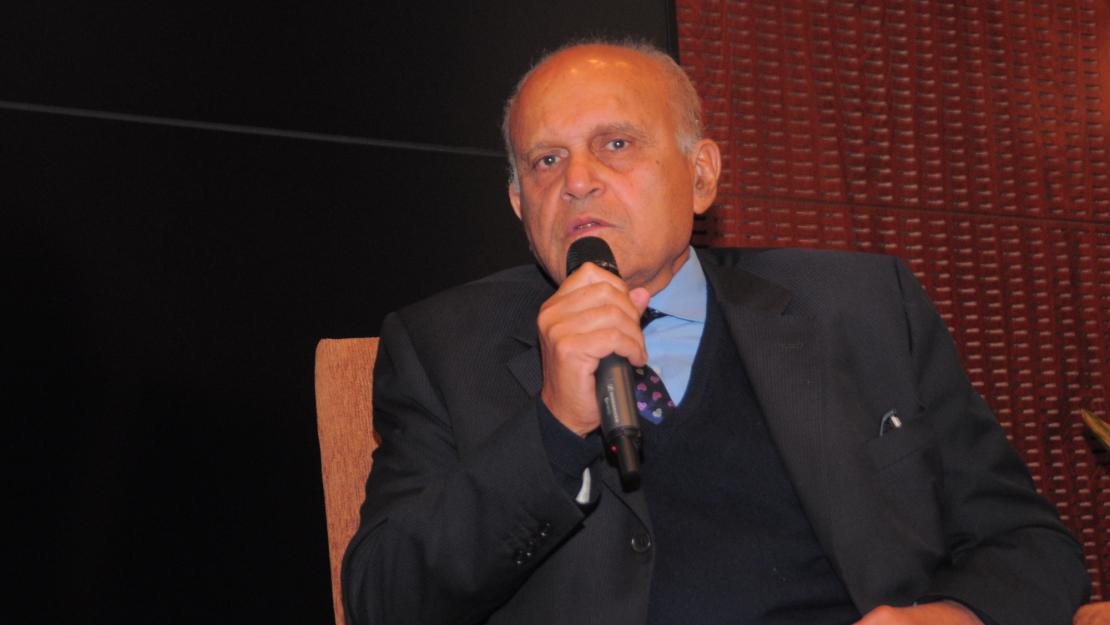 Sir Magdi Yacoub received a Global Impact Award from AUC in 2015, when he also came to AUC for a collaborative partnership between the University and the Magdi Yacoub Heart Foundation
By
Aliah Salih

Professor Sir Magdi Yacoub, professor of cardiothoracic surgery at the National Heart and Lung Institute, Imperial College London; founder and director of research at the Harefield Heart Science Centre; and founder of the Magdi Yacoub Heart Foundation, will be speaking at AUC’s 2018 Research and Creativity Convention, where he will be addressing the attendees on his lifelong journey in research, innovation and service.

Dr. Yacoub, one of the world’s most prominent and renowned heart surgeons, graduated from Cairo University’s medical school in 1957 and shortly after, moved to the United Kingdom. There, he transformed the field of heart transplants and surgery, working at the National Heart Hospital-Royal Brompton and Harefield Hospital, where he performed the first heart-lung transplant in 1980 in the United Kingdom. At Harefield, his team performed more than 1,000 surgeries,. Under his leadership, Harefield became the UK’s leading heart transplant center. As founder and director of research at the Harefield Heart Science Centre (Magdi Yacoub Institute), Yacoub oversees over 60 scientists and students in the areas of tissue engineering, myocardial regeneration, stem cell biology, end-stage heart failure and transplant immunology. Yacoub was knighted by Queen Elizabeth in 1992 for his services in medicine and surgery. Throughout his career, which included working at the National Heart and Chest Hospitals at the University of Chicago, Yacoub conducted extensive research to “perfect what [they] were doing, to evaluate new forms of treatment and to study and improve surgical techniques.”

Yacoub received a Global Impact Award from AUC in 2015 for this work that "advances Egypt and the world." Yacoub, who also received an honorary doctorate from AUC in 1989, noted that the “collaborative research effort between the Aswan Heart Centre [part of the Magdi Yacoub Heart Foundation] and AUC represents a lot more than the component parts and should be pursued with vigor.” In addition, in 2010, Yacoub delivered a lecture at AUC titled "In Search of Excellence."

Though he mostly resides in the United Kingdom, Yacoub’s contributions to Egypt have been evident and celebrated in recent years. He has been a pillar in helping thousands of Egyptians get treated from cardiac diseases, after the founding of the Magdi Yacoub Heart Foundation, which is the legal arm of the Aswan Heart Centre, a charitable tertiary cardiac center in Upper Egypt serving Egyptian underprivileged pediatric and adult patients, both in treatment and in research. In 2015, The Magdi Yacoub Heart Foundation collaborated with AUC to develop programs that aim to advance technologies supporting cardiac procedures and heart surgeries in Egypt.