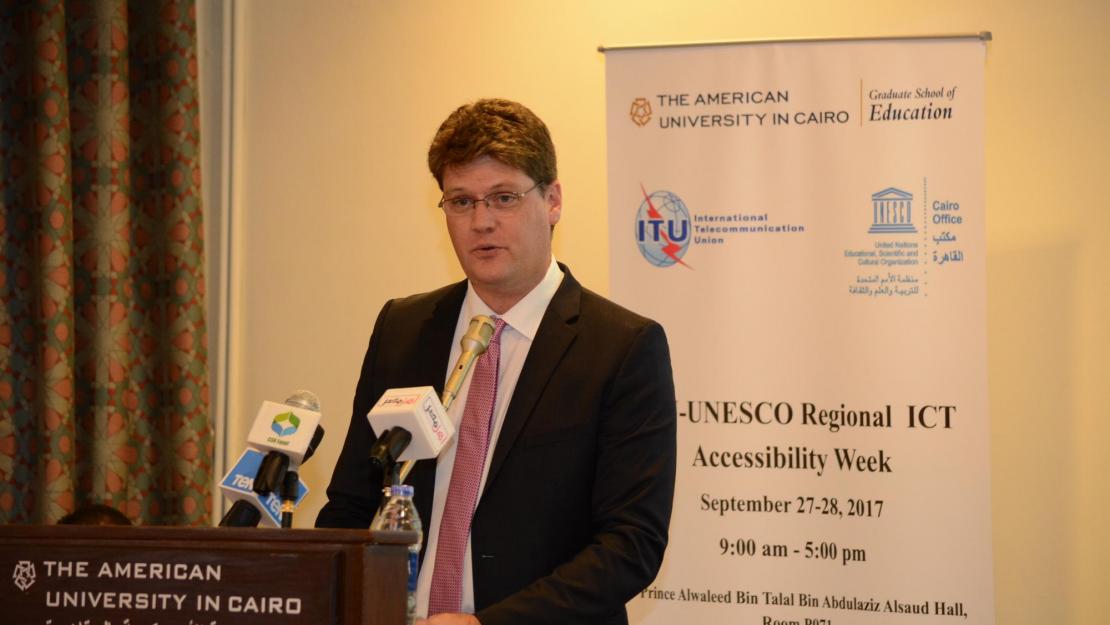 Ted Purinton, dean of AUC's Graduate School of Education, calls for recognition of the “massive hidden potential” of people with disabilities
By
Elizabeth Lepro

Dressed in smart casual attire and settled in their seats in Prince Alwaleed Bin Talal Bin Abdulaziz Alsaud Hall, people began to adjust the volume on their translation headsets, flip through programs written in Braille and turn their heads toward a sign language interpreter at the front of the room.

If this didn’t make the message of the UNESCO and International Telecommunication Union’s (ITU) Regional ICT Accessibility Symposium clear enough, President Francis Ricciardone laid it out in his opening keynote, “Information must be accessible to all. It simply must be.”

“We take pride in being pioneers, with Egypt, in Egypt, for Egypt,” Ricciardone went on to say. “We recognize that we must devote special attention to making sure that [accessibility] is possible. We must think purposively and deliberately in our architectural arrangements for places of learning. We must think purposively and creatively in exploiting the telecommunications and electronic resources of our time. So this one area of massive change -- AUC is proud to be in it.”

About 35 educators; disability advocates; members of various governmental, nonprofit and international organizations; ministry representatives; technology specialists; and members of the AUC community gathered recently at the University for the symposium, which marked the end of a week of accessibility awareness and two days of workshops focused on making technology and education more accessible to people with disabilities.

Ted Purinton, dean of the Graduate School of Education (GSE), which hosted the event, called for recognition of the “massive hidden potential” of people with disabilities, who make up about 15 percent of the world’s population and about 12 percent of Egypt’s, according to the World Health Organization and United Nations estimates.

Despite these statistics, accommodations as simple as accessible sidewalks and ramps often remain missing from Egypt’s cityscape and public universities. This is a problem that alumna Amena El-Saie ’11, president and CEO of Helm foundation, and her colleagues are dedicated to solving. Presenting at the event, El-Saie described Entaleq app, which she and her team developed to make it easier to find out which businesses have accommodations before visiting. They also created accessible walkways and campaigns at Cairo University.

“We ask, ‘Why do people with disabilities not get a chance?’” El-Saie pondered. “The reason is because we have a role as a society to make every shop and every service [accessible] and to raise awareness about the private sector’s role.”

Speaking of her organization’s initiatives to work with local businesses directly, she noted the importance of including people with disabilities in Helm and creating opportunities for mentorship. “We tried to [just] employ people with disabilities in companies and we realized that’s not enough,” she said. “We realized that maybe our role is to try to show people what they are capable of doing -- and we want to ensure sustainability. This became the biggest tool that they have: self-confidence.”

The Ministry of Education has also made the inclusion of people with disabilities a more fundamental part of its mission throughout the last five years. According to a representative at the symposium, the ministry has made 500 schools more accessible, provided technology to 23 public universities, trained more than 1,200 persons with disabilities for employment and connected 300 with job opportunities at companies throughout Egypt.

Gihan Osman, assistant professor in the Center for Learning and Teaching and the Graduate School of Education, where she specializes in technology, has also been working on a variety of projects to enhance access to education to all Egyptians. “As we work for sustainable development, as we think of the importance of education for the development of Egypt, we need to put into consideration that we would be doing ourselves an incredible disfavor in ignoring such a huge, proportional population by depriving them of access to education -- and even more: of access to quality education,” Osman said.

As she spoke, AUC was coordinating with the Massachusetts Institute of Technology to host a panel session on blended and online learning -- a topic those in attendance knew was connected to the day’s discussion. “Here at AUC and in the rest of the world, there are increasing conversations about using technology and online learning to enhance access to quality education,” Osman continued. “But now, as we move in that direction, it’s very important that we put into consideration web accessibility and make sure that people with disabilities [not only] have access to quality information, but also have access to quality resources online.”

Alumna Heba Hagras ’82, ’98, a member of the Egyptian Parliament and a lifelong advocate for disability rights, relayed the importance of including the needs of people with disabilities among the priorities laid out in the Egyptian government’s sustainable development goals. “The key objective of the SDGs is for no one to be left behind, and so these objectives lead us to start with marginalized groups,” Hagras said.

Hagras acknowledged that technology is one of the most valuable tools for people with disabilities, but still criticized a lack of coordination between governmental ministries in facilitating its use and creating policy focused on accessibility.

All panelists agreed that, despite bureaucracy and misconceptions, it is possible to create a more accessible Egypt. “A lot of people said it’s not doable,” El Saie said. “It is doable. We’ve done it.”