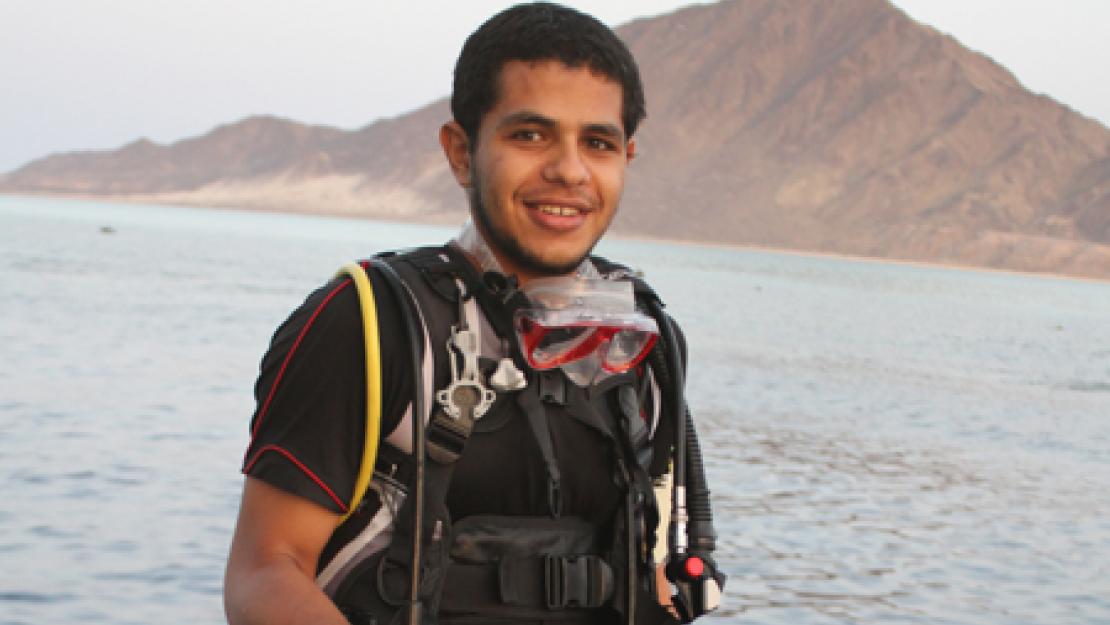 Ahmad Sonbol, a 24-year-old teaching assistant (TA) at the Department of Biology who died during the dispersal of the Rabaa protests, is remembered by his colleagues and friends for his endless energy and love of science, particularly marine biology.

“It is very sad to lose such a young and positive member of our community,” said Rania Siam, chair of the biology department. “Ahmad had shown a lot of interest in marine science and had wanted to be involved in marine genomics research. His ideas and enthusiasm were vast. It is tragic to lose such a pleasant young man who always smiled and was willing to help everyone.”

With a passion for marine biology, Sonbol –– an only son among five daughters –– volunteered with Hurghada Environmental Protection and Conservation Association (HEPCA), conducting studies on marine turtles and dolphins in Hurghada. He organized summer camps, mainly for children and young adults, to introduce them to coral reefs and shed light on the importance of this scarce natural resource. Most recently, he organized a one-week camp in Spring 2013 in Hurghada for students from Cairo American College to introduce them to the wonders of the Red Sea, from coral reefs and turtles to sharks and dolphins. He was due to travel to Turkey this fall to pursue a master’s in marine biology. “The Red Sea was absolutely one of his passions, and his ideas about marine biology projects were infinite,” affirmed Arthur Bos, assistant professor of marine biology and ecology, with whom Sonbol regularly chatted about his activities and research in the Red Sea. “Ahmad’s initiatives have triggered educational campaigns and conservation efforts in the Red Sea, and his passion for marine biology will be remembered by many students and colleagues.”

Ragya Sorour, executive assistant to the biology department chair who worked with Sonbol for more than three years, remembers him not just by his enthusiasm for marine life, but also his pleasant and ambitious personality. “Ahmad first approached me when he heard of an opportunity to become a teaching assistant at the biology department,” said Sorour. “We spoke about his interests, hobbies and future plans. It was inspiring to see how fascinated Ahmad was about marine genomics. I will always remember Ahmad as that positive person who always had a smile on his face and a warm greeting. He loved his work in marine genomics and always did what it took –– exploring and traveling –– to learn and achieve his goals.”

As his sister, Sarah Sonbol, a biotechnology master’s student at AUC, put it, “Ahmad always believed that it’s not enough to be positive and proactive; we have to be creative initiators. His main concern was encouraging students to love science, which he saw as a way to study the magnificence of God’s creations on Earth.”

For Abdullah Hamdy, a mechanical engineering senior, it was this desire to educate and spread awareness that was a source of inspiration for him. “Ahmad was a role model for me,” Hamdy said. “He sincerely believed that if you want something, you have to work hard for it, and that people should have a goal in life. Anybody who interacted with Ahmad must have learned something from him. He was well-mannered, actively involved in charity, cared about people’s feelings, loved to educate and always motivated people to do good and respect one another, even if they have different views. He believed in education, not only scientific, but also moral and spiritual education. I will truly miss him.”

Spreading good is one of the main characteristics Kareem Khaled, a research assistant and environmental engineering graduate student, remembers Sonbol for. “He was full of energy and dynamism,” Khaled said. “Wherever there was a good cause, you'd find Ahmad first in line. He collected donations for Palestinians in Gaza and for people in Syria. He taught Quran to thanawiya amma students, who considered him their mentor and friend. He regularly invited speakers inside and outside AUC to address contemporary topics that would make youth well-informed and engaged in all major issues that affect their lives so they would be able to positively contribute to nation building. His main aim was spreading knowledge.” Ayman Eid, biotechnology master’s student at AUC, vice president of the biotechnology club and graduate senator, remembers Sonbol’s contagious smile. “Every time I used to see Ahmad with his students, they were all happy and laughing,” he said. “It was easy to notice how much they admired and respected him. Ahmad would have made a great scientist.” Echoing the same sentiment about Sonbol’s pleasant attitude, Hanan El Kassas, biology lab specialist, said, “He was such a kind and good person. I always felt that I was working with my son.” Edwin Cruz-Rivera, who served as an assistant professor of marine biology at AUC, wrote the following when he heard of Sonbol’s death: “Ahmad Sonbol was my TA for years, my pupil and my friend. A few weeks ago, he wrote and called with excitement after being accepted for a master’s program in marine biology in Turkey. He would have been leaving soon for that new stage of his life. I was very proud, as any serious mentor who sees one of his own succeed would feel. Today, his light shines no longer. Ahmad and I had many conversations over the years, and while we sometimes did not see eye to eye, those times we agreed to disagree always ended with smiles, appreciation and a deep respect for each other. I will honor him not by remembering how he died, but how he lived. I will always remember his excitement while observing some new marine creature or learning some new ecological concept he had never considered before. I will cherish our chats, and his spirited personality and charisma. He would have become a great educator –– his main passion. Just yesterday, as I spent some time with some of my former students who are moving into their next stage in life, Ahmad’s name came up. As part of my research group, no matter where he was, he was never really gone, and he never will be.”