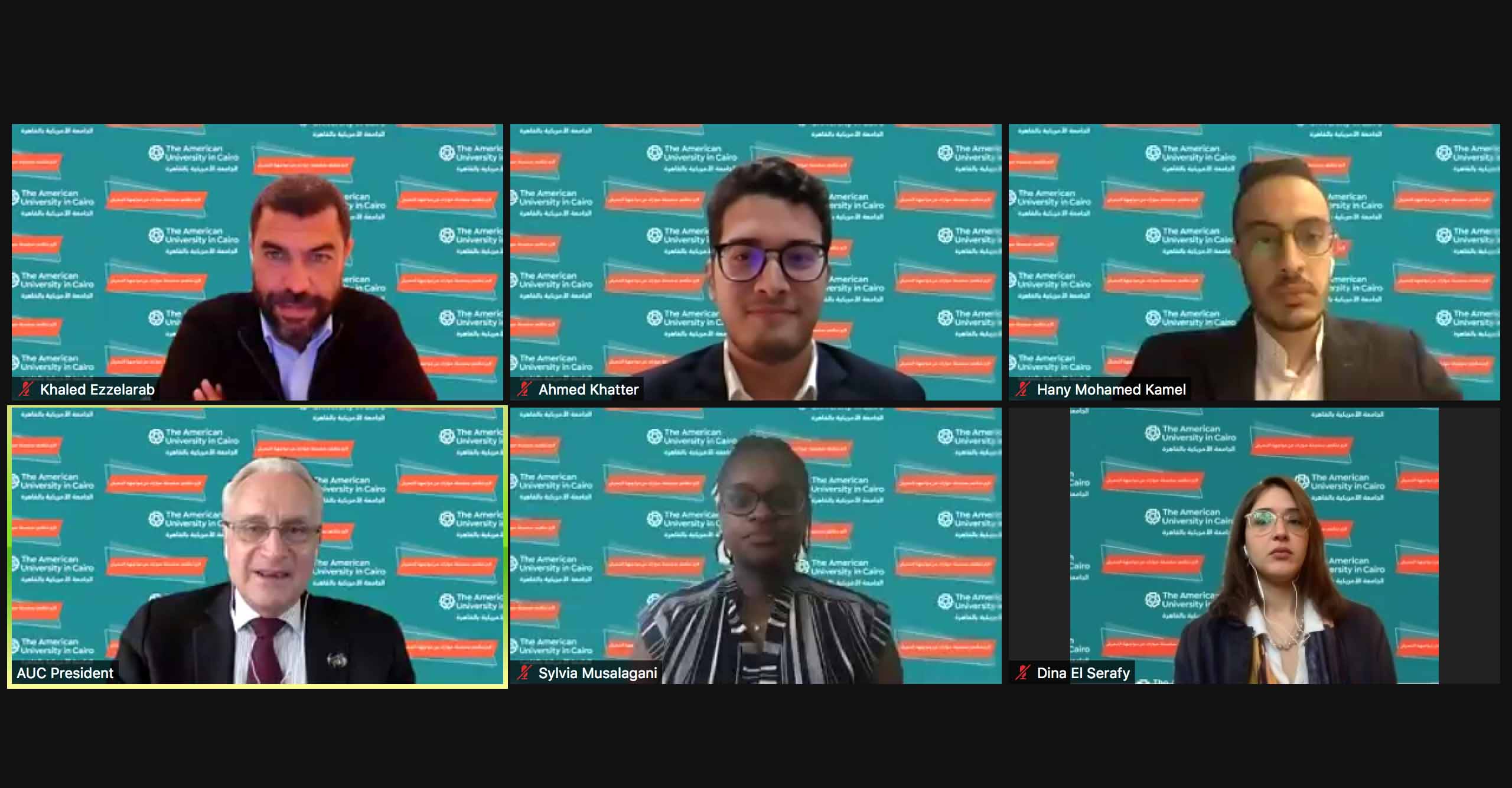 In his welcoming remarks, AUC President Francis Ricciardone discussed the SpeakUp Initiative’s role, which was launched last November, to raise awareness of sexual harassment first on campus and then off-campus through the Dialog Series. “SpeakUp started as an internal community initiative that aims to create a culture of anti-harassment and non-discrimination that includes all the infrastructure like a zero-tolerance policy for sexual harassment and a dedicated office, the Office of Institutional Equity, to help enforce and uphold this policy. We do that through the mandatory online training for all community members designed to raise awareness of sexual harassment.” AUC also has an online reporting system that enables any person who experienced harassment or discrimination to report a complaint.

Dina El Serafy, national cooperation specialist, National Council for Women, identified online violence against women as any act resulting in psychological, physical, sexual, or economic harm or suffering. “It is manifested online in harassment, bullying, stalking, revenge, defamation, and hacking another person's account. Violence in real life happens online, and forms of online violence through social media platforms can sometimes result in offline violence, like stalking and at times rape."

On TikTok, Hany Kamel, North Africa content operation director, said that the platform had detected an increase in the number of reports of fabricated videos, which happens when a user creates a video using another’s pictures without his/her consent. "We reviewed the general content and assigned four teams to review the videos. The review process starts with artificial intelligence and ends with local teams specialized in the users' country's language and culture."

Sylvia Musalagani, safety policy manager, Middle East and Africa, Facebook, said that sexual harassment mainly affects women and other vulnerable and minority groups. She said that statistics show that globally more than 70 % of women, in comparison to men, are targeted with harassment. Musalagani shared research results that showed a substantial reason women don't use online platforms is to avoid online harassment. She also said that harassment and online violence are not recent, but they made their way online because it is easier to reach more people online.

"We have encountered non-consensual image sharing and hate speech targeting women in leadership or women running for office,” said Musalagani. She pointed out that harassment is not always sexual in nature but done sometimes to prevent women from using social media platforms, thus putting them at a disadvantage.”

Khater, AUC computer engineering senior, pointed out one of the main problems facing many first-time users of social media platforms. "We find that all social media platforms settings are pre-set to the minimum degree of privacy, putting many at risk. Without proper awareness, users don't realize the dangers of sharing their information and photos."

Towards a Safe Online Environment for Women

El Serafy explained that "it is essential for people to know that there are laws and a legislative environment in place to protect women, where the penalty for harassment is five years or a fine of 50,000 pounds. The law clearly defines the meaning of harassment and information technology crimes. And we must continue to raise women's awareness of the existing law, the current protection of the victims’ confidentiality and their right to report.” El Serafy also said that the NCW has a branch in every governorate. Its Women's Complaints Office receives complaints of violence against women and provides legal and social advice through the hotline 15115, or email, or by visiting the council's branch.

She also discussed the multiple bodies that address complaints of violence against women in Egypt, including online violence, which are the NCW, for women above the age of 18 and the National Council for Motherhood and Childhood, through their child helpline,16000, for girls under the age of 18. “That is in addition to the unit investigating cybercrimes at the Ministry of Interior and the Public Prosecution Office, that now receives complaints electronically.”

To preserve evidence, El Serafy emphasized the need to keep screenshots of conversations containing a threat or use of violence, report them on the platform used, and inform the local authorities if desired. "Sharing pictures and private information must also be handled carefully, and it is always important to remember that the Internet records everything and forgets nothing."

Discussing TikTok's effort to provide a safe online environment, Kamel said that the full TikTok experience is intended for users aged 13 and above. "We monitor the accounts that children create under 13, and we take appropriate action. We also use "family pairing" to help parents and guardians keep their teens safe and protect them from exploitation. And for those between 13-15 years old, they can communicate only with those in their small circle of friends to protect them from bullying and harassment."

Kamel also said TikTok has launched three awareness campaigns including "Think before you send”, in cooperation with UNICEF, and "Be Safe, Be Happy" campaign, and has included the influencers on the app to spread the culture of safe behavior on the Internet.

“If a violation or harassment is proven, TikTok will remove the content after reviewing it by the local teams. In case of a severe violation, the account is banned. If the person commits acts that represent a danger to society, we contact the local authorities to take the appropriate measures,” Kamel said.

To combat online violence, Musalajani said, that if users violate the policies of the platform, they are prevented from using it. “We have a zero-tolerance approach to sharing non-consensual intimate images, a high-priority offense, we take extreme measures and ban the person from using all our platforms. We also use technology to prevent these images from being shared, and in some cases, we work collaboratively with local law enforcement to investigate such cases.”

Musalagani stressed the importance of the platforms' role in preventing perpetrators from using them and causing harm to others. "On Facebook, Instagram and WhatsApp, we have invested in technology to identify such behavior to prevent the perpetrators from causing harm, and we focus on in-app messaging to raise awareness of the content violating community standards.” She also said highlighted Facebook’s cooperation with the National Council for Women in Egypt to spread awareness of these problems.

Khater highlighted the need to continue raising awareness of online privacy issues, the importance of reporting, seeking help and breaking the silence if subjected to online harassment or violence.