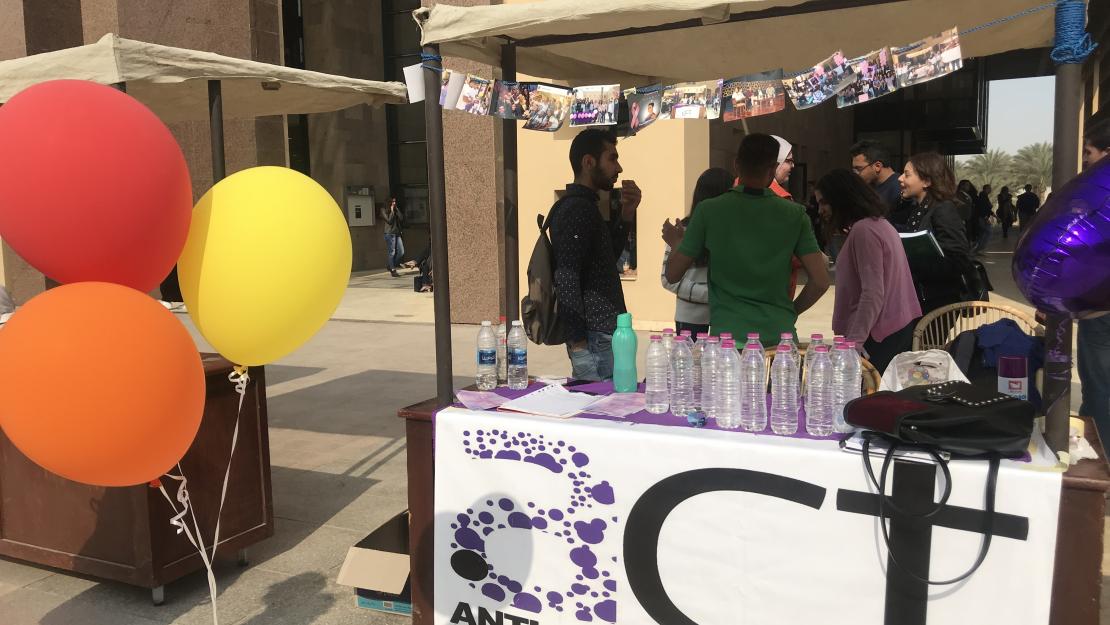 As Assembly Hour approached, the students prepared their booth set up on Bartlett Plaza at the New Cairo campus. Colorful balloons labeled with different types of cancer knocked together in the wind. Students hung pictures around the display and arranged plastic water bottles with lavender caps in a ribbon shape — the Universal symbol of cancer prevention.

These students are members of AUC's Anti-Cancer Team (ACT). As they set up their booth for World Cancer Day — an important event for the AUC club tasked with the mission of raising awareness of cancer prevention — they prepared to educate and inform their peers about all things cancer.

One in five men and one in six women worldwide develop cancer during their lifetime, according to the World Health Organization. With those statistics in mind, it is likely that most people know someone or have a loved one who has been diagnosed with cancer. With World Cancer Day celebrated on February 4, ACT spent the day raising awareness and stressing the importance of the small measures one can take to prevent cancer.

As Heba Elbarbary, a junior at AUC who currently serves as ACT president, geared up for World Cancer Day, she reflected on what being a part of ACT has given her, noting that her main goal of the club is to “help as many people as possible.” “I want to have an impact on people," Elbarbary explained. "Creating awareness only takes you so far. I want people to act on the awareness and actually help people.”

Elbarbary said that ACT has around 100 members, but she expects membership to increase after the recent Engagement Fair held at AUC and the World Cancer Day booth she helped to run.

Hadeer Ali, a sophomore at AUC and ACT logistics head and entertainment associate head, said being an ACT member is important to her because she is gaining cancer-prevention knowledge and experience. “This club helps cancer patients," Ali noted. "It gives them support and motivates people. I think it even encourages people who don't have cancer."

At the booth, ACT members handed out index cards with cancer prevention tips and motivational notes printed on them. While handing out the notecards, Ramez Habib, ACT financial coordinator, noted that people who are lacking in awareness are putting themselves in danger. “We lack awareness, even here at AUC, about cancer and all its types,” said Habib. “From breast cancer to liver cancer — we need more awareness in our community.”

Hani Henry, associate professor of psychology in the Department of Psychology said many Egyptian families “lack openness” with having conversations regarding cancer diagnoses. “This creates a burden on those with cancer and their loved ones,” he said. “Both cancer patients and their families need to explore and express negative feelings, such as anger, despair, loss and anxiety. For younger children, this crisis can be very challenging and hard to understand.”

ACT works with children who are cancer patients at nearby cancer institutes. Last October, they hosted an event for children on campus called Great Laughter Emits Energy, or GLEE. Elbarbary recalled a girl from a nearby hospital who was “basically crying from happiness.” “At the end of the day, she came and personally hugged me and said how thankful she was for that day,” said Elbarbary. “Getting to see how happy she was made me happier than I've felt in a long time.”

While ACT often hosts cancer patients at AUC, this year, they are planning to visit a nearby cancer institute so they can engage with more cancer patients — especially those who are unable to leave the hospital. Elbarbary said they are expecting 150 children to attend the event — more children than they have ever hosted. Along with games, ACT will bring posters with messages of encouragement written by AUC students who stopped by the World Cancer Day booth.

Ali noted that while World Cancer Day raises awareness, it also reminds those affected by cancer that they have a support system.

“Although cancer patients are ill, they want to survive,” said Ali.

“They are much more powerful than us,” added Elbarbary.

Henry stressed that families affected by cancer who see psychologists can receive the support that will help them to better cope with the reality of cancer. "Therapists provide a safe environment for family members to explore, verbalize and process their feelings," said Henry. "They also need to provide them with skills in managing this great test ... and help them develop realistic hope about the disease and help create possible plans for the future.”

Both Ali and Elbarbary echoed Henry’s sentiment, emphasizing the importance of being there for loved ones. “My best friend was a cancer patient," said Elbarbary. “What I really advise people to do is to stay with that person. They need the strength; they need the support; they need someone to always encourage them.”

As she spoke, the lavender water bottles glinted in the sunlight as students approached the booth to receive prevention tips, write encouraging notes to cancer patients and learn from their peers.