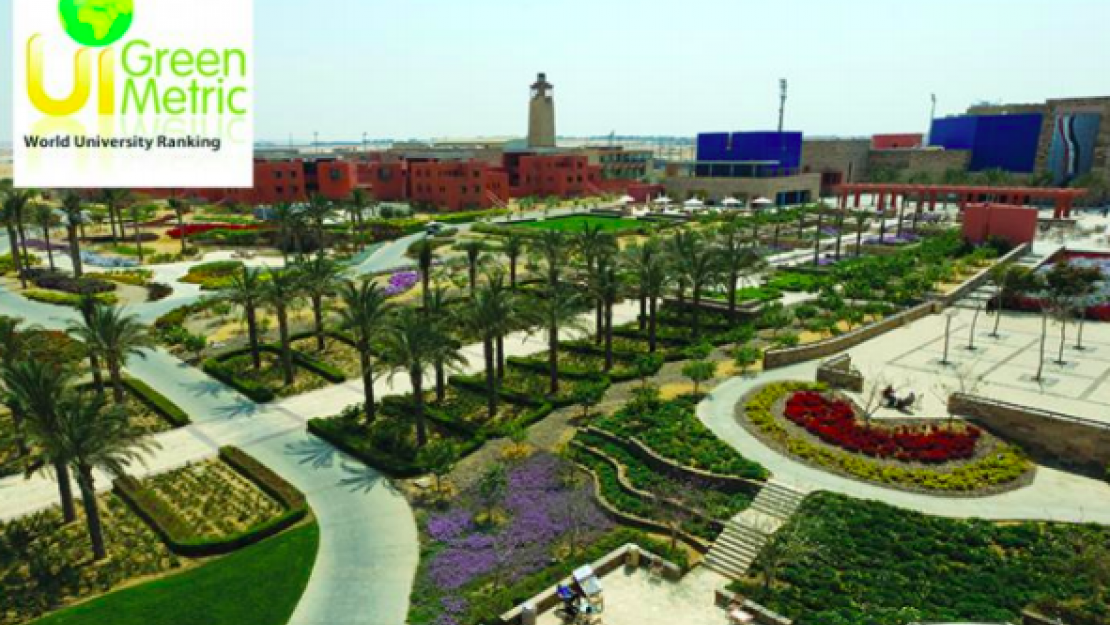 AUC has improved its ranking in the Universitas Indonesia (UI) GreenMetric World University Ranking, placing 136 out of 719 institutions worldwide, up from 175 out of 619 institutions last year.

“This makes AUC a leader in sustainable development not only in Egypt but in the Middle East and North Africa (MENA) region as well,” said Yasmin Mahmoud, Sustainability Officer in the Office of Sustainability.

She emphasized that the UI GreenMetric ranking allows AUC to compare the success of its sustainability initiatives and to benchmark improvement from year to year. “It is very important to have these international sustainability ranking systems and be ranked highly against institutions all over the world. Our ranking shows that we can be an international leader in sustainability and an example to all other universities to follow our footsteps.”

Mahmoud points out that this year’s ranking puts more emphasis on institutions’ awareness of their carbon footprint, a direction in which AUC has been focused on for the past seven years. “I think this is one of AUC’s major accomplishments that made us place in an even higher ranking than last year. To our knowledge, we produced the first carbon footprint report in the MENA region in 2012.” AUC’s newest Carbon Footprint Report will be published in April 2019.

An initiative of Universitas Indonesia, the GreenMetric ranking scores universities in six main indicators: setting and infrastructure, energy and climate, waste, water, transportation and education. The ranking is based on an institution's overall commitment to developing and maintaining environmentally-friendly infrastructure. The Office of Strategic Management and Institutional Effectiveness (SMIE) is especially pivotal to AUC’s green commitment by compiling information regarding University sustainability projects from the Office of Sustainability, the Center for the Advancement of Research on the Environment and Sustainability (CARES), and Transportation and Food Services.

Mahmoud pointed out that the University has already significantly reduced its carbon footprint in 2018 in various categories, from water supply to solid waste disposal, but is looking for potential avenues to increase reduction. “We are working on implementing various sustainability initiatives, from increasing the number of chilled water dispensers on campus to facilitating a bike-share program,” explained Mahmoud. She continued that the Office of Sustainability is also coordinating with Facilities and Operations to install motion sensors in all building corridors and occupancy sensors in all academic classrooms and department suites. “By consistently finding ways to reduce our carbon footprint, no matter how large or how small, we as a University are thinking of the future,” said Mahmoud.

The Office of Sustainability also has several projects to tackle proper waste disposal on campus, through sorting stations in the on-campus student housing and outside campus buildings, as well as through a piloted paper collection campaign. However, there is still a lot of work to be done. “We believe it will be most effective and convenient if we create an online forum for departments to communicate directly with the Office regarding overflowing or missing paper collection bins. We also hope to expand the amount of sorting stations on campus and piloting in-building sorting stations” commented Mahmoud.

To deal with the waste, the University has a recycling facility where staff workers sort materials and a compactor compresses the recycling into a fraction of the original size. “It allows us to sell the materials for a higher price to people who can reuse them in other projects. This revenue directly funds new sustainability projects,” said Brandon Rothrock, the presidential associate in the Office of Sustainability.

Mahmoud and Rothrock emphasized that a Sustainability Report, which is utilized by various high-ranking Universities in the U.S. and abroad, is imperative to improve sustainable practice at AUC. The report would also aid the University’s overarching goal in internationalizing its operations and outreach.

Apart from the report and other operational initiatives, they both noted the importance of community education at the institutional level. The Office of Sustainability recently partnered with CARES to create the Sustainable Campus Committee, an informal group which meets each Sunday during Assembly Hour and discusses environmental issues at AUC and abroad. The two University entities also put on environmental programming for EarthWeek, a week-long celebration of World Earth Day.

Mahmoud recognizes that improving existing initiatives is as important as producing new ones. The UI GreenMetric ranking is an encouraging indicator that the University is on track and truly cares about its impact on the environment. “[the ranking] gives the AUC Community a feeling that we are really achieving a sustainable future together. We start here on our own campus, but we do not end here. We aim to promote sustainability to achieve a greener AUC, a greener Egypt, and a greener world,” Mahmoud said.