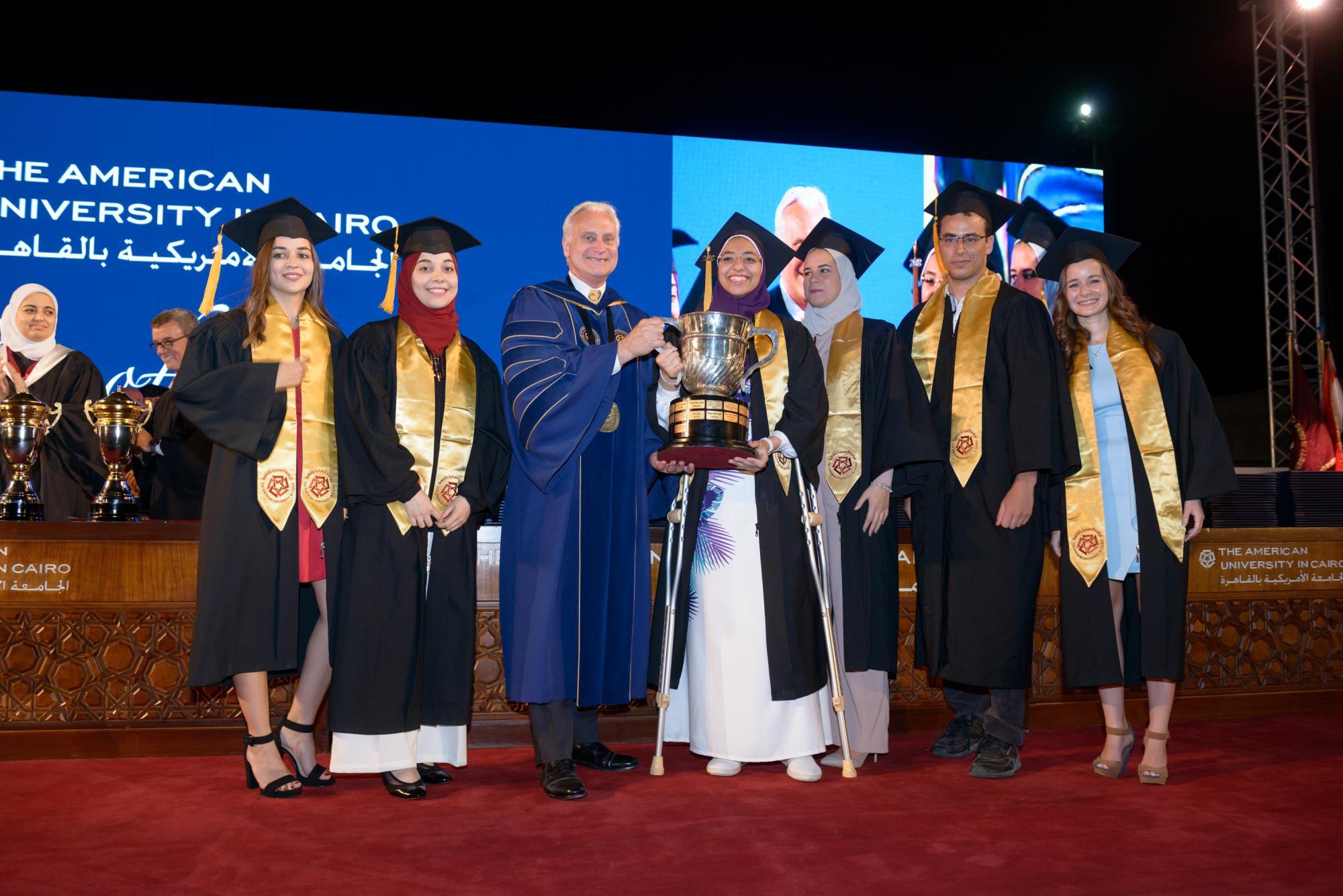 July 2, 2018, Cairo – The American University in Cairo (AUC) recently held its spring graduation commencement ceremonies that witnessed the graduation of 668 undergraduates, of whom 116 graduated with honors, 129 with high honors and 144 with highest honors. Master’s degrees were awarded to 128 candidates at the graduate commencement and three students received a doctorate degree.

At the graduate commencement, Al-Mashat, remembering a quote from the Provost at her own graduation in 1995, reminded the students that the diplomas they would soon be holding are the most important documents they would ever receive — more important than their marriage certificates. “It [graduation diploma] will not be revoked, and it cannot be nullified,” she said.

Al-Mashat went on to discuss the impact of her own AUC education, referencing its importance to her career of working for organizations including the World Bank and the International Monetary Fund, and finally, in her current position as Egypt's minister of tourism. “The slogan for tourism promotion is ‘Egypt, where it all begins.’ For me, personally, I can say ‘AUC, where it all begins.’”

Al-Mashat also spoke to the women in the class, of which there were 93, telling them to never let gender stand as a barrier to their success.

Later in the day, at the undergraduate commencement, President Francis Ricciardone welcomed the crowd of roughly 5,000 people by acknowledging the internationalism present in the class and the audience -- 25 international students graduated in the Class of 2018 -- and recognizing those who were unable to make it.

“It’s a special privilege to have a few who are from far less fortunate circumstances than most of us here this evening -- I would say than any of us here this evening -- who are refugees from their home countries, whose families aren’t able to join us,” Ricciardone said. “You are with us tonight, and we are conscious of you, and we join you in celebrating your sons' and daughters’ high achievements.”

In his speech at the undergraduate ceremony, Mohieldin said: “It wouldn’t be very wise to assume that deep knowledge can be obtained at a very young age. … but how to do it is, basically, seek advice. Don’t be reluctant to ask somebody who you trust and with so many achievements in life,” said Mohieldin, citing his own life experience. “The only problem that we need in this country, in this region and indeed in this country… is more of you who are not just going to get certificates as Bachelors of Arts or Bachelors of Science, but basically, a license for lifelong learning. Your journey starts now.”

Distinguished students at the undergraduate commencement were recognized for their achievements. The President’s Cup and the Mohamed EL Beleidy Academic Award were given to Salma Mostafa Farrag, Nadine Ahmed Wahdan, Yasmine Ahmed Galal, Rana Samir Ead, Badr Khaled Alkhamissi and Salma Shukry Emara, who ranked highest in the graduating class and who studied construction engineering.

The Nadia Younes Award for Public and Humanitarian Service was awarded to Mazhar Ahmed Ibrahim. The Omar Mohsen Athletic Achievement cup was presented to Farah Omar Abouraya. Other awards included the Ahmed El Mehallawi Family Award that was given to Ahmed Tarek Gazar.

The Dr. Ahmed Abdel Rahman El Sawy award, presented to the student with the highest grade point average in the engineering department, who has been a Public School Scholarship recipient, was awarded to Mostafa Saeed Zaki.