Camp David at 40: An Inside Look 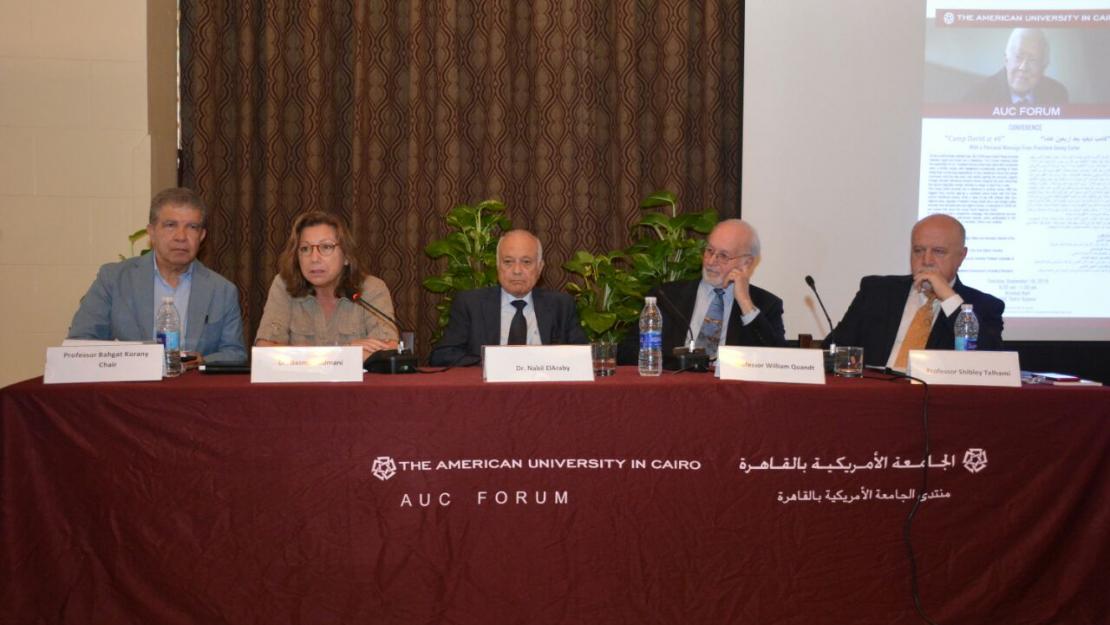 “Carter looked at us and said, ‘This issue is not nearly as complicated as you think. We are going to bring these two leaders together, and we are going to realize the historic importance of this moment and they will rise to the occasion and show the best side of both.”

With these words, William Quandt, professor emeritus at the University of Virginia and former staff at the U.S. National Security Council, reflected back on his experience from inside Camp David and the events that took place that led to the agreement between Egypt and Israel. Quandt was joined by Nabil Elaraby, former Egyptian minister of foreign affairs and former secretary-general of the League of Arab States, at a conference hosted by AUC Forum last week titled Camp David at 40 to discuss the historic Camp David Accords 40 years on, with a personal message from former U.S. President Jimmy Carter.

The first session of the panel, chaired by Nabil Fahmy, dean of the School of Global Affairs and Public Policy at AUC and former Egyptian minister of foreign affairs, was a discussion of what happened on the inside of Camp David. Forty years ago, despite criticism from the Arab world, Egyptian President Anwar Sadat and Israeli Prime Minister Menachem Begin agreed to meet Carter at Camp David. Both Elaraby and Quandt, who were present at the summit, noted that in addition to resolving the conflict between their countries, the two leaders were cognizant that relations with the United States were also at stake.

Speaking to the crowded Oriental Hall, Quandt described the difficulties Carter experienced in negotiations with Sadat and Begin. Quandt recalled how Carter had told him he anticipated a resolution within two to three days.

Quandt said at moments, it looked like the summit would fall apart. Rather than attempting to combine Sadat's and Begin's proposals, Carter’s counsel concluded that the only way to reach an agreement was if the United States put forth a proposal of its own. Thirteen days and 23 drafts later, the Camp David Accords were signed.

Though they reached an agreement, Quandt admitted the treaty had flaws, including general vagueness in order to keep both Sadat and Begin satisfied. "Provisions of Camp David, in my opinion, could have been improved in certain matters,” remarked Elaraby, “But [the treaty] produced peace."

Carter’s reflection on the accords, read to the audience by Bahgat Korany, director of AUC Forum, captured Elaraby's feeling of dissatisfaction.

Titled “Keeping Faith,” Carter's message made it clear the accords were not perfect:

“Looking back on the four years of my presidency, I realize I spent more of my time working for possible solutions toward Middle East peace than on any other international problem. These four years were dominated by this, and the key of this four years was served."