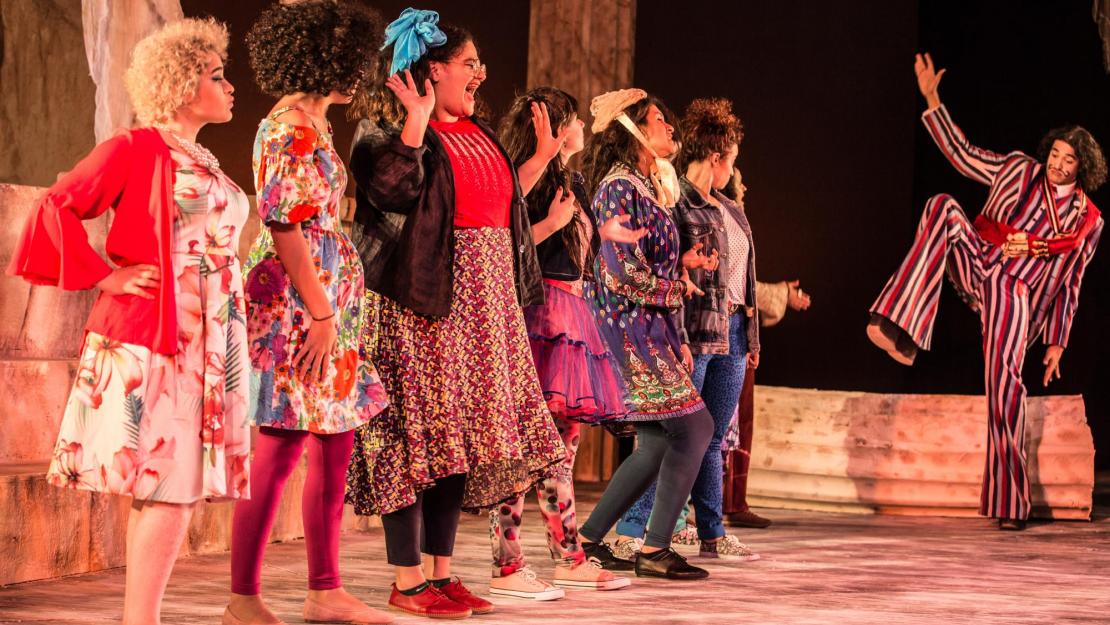 “Teaching is like a one-person show,” said Jillian Campana, professor of theatre in the Department of Arts, likening the students to an audience, and a lesson plan to a script.

It was moving to Cairo for the first time in 1993 as a fresh college graduate — before returning again in the second half of 2016 — that sparked her interest in teaching. “I was deciding whether to become an actor or not, and I had moved to Los Angeles. But I didn’t feel like a strong woman there; that industry privileged appearance over intellect and creativity,” she said. “It was too hard to give up something I had been doing since I was 5, so I wanted to go as far away as I can. I wanted to immerse myself somewhere completely different. So I came to Egypt, and I immediately fell in love with it. I found out that through teaching theatre, you’re able to teach a lot of other subjects.”

Since then, she embarked on a journey to not only explore, but test the limits of conventional teaching methods by pairing them with her passion for performing arts.

Campana began her teaching career by taking teaching English as a foreign language classes at AUC's School of Continuing Education. Upon working with refugees from Eritrea and Ethiopia, she found that she was successful in teaching language skills through drama, realizing that this method of education was key to the learning experience. “It provided authentic context and repetition, reinforced memory and allowed them to be more playful with the language,” she explained.

As a result of her innate passion for drama and theatre and her extensive educational knowledge of performance studies, Campana could not help but acknowledge the performative nature of teaching and how much it resembled being on stage. Her then-newfound interest in pedagogy, the art of teaching, allowed her to take note of the way in which all teachers often find themselves adopting completely different and well-rounded characters that automatically present themselves during class.

“If the content is delivered in a creative way, it will stick in the students’ minds; it will connect them to the subject matter,” Campana affirmed, adding that this type of experiential education at AUC has often proven itself as a great way to engender more interest in the subject. “Students will be more likely to engage with the subject and more likely to use it in their everyday lives.”

Since her return to AUC, has taught an array of theatre classes, including Theatre in the Making, Acting I & II, Documentary Theatre, Applied Theatre and Physical Performance. Campana shed light on the approach of integrating art in teaching by giving an example where students might be presented with material pertaining, for instance, to the history of Greek theatre. This information may be strictly theoretical, she noted, requiring hours and hours of traditional lecturing techniques. This is when she takes a different route so that students are able to connect to it on a more personal level.

"Rather than just talk at them, I can give them a little bit of information and then maybe have them create a poem with that information and perform it as a Greek chorus,” she said. “That way they’re hearing the information; they’re turning it into something that’s meaningful for them in a creative way; and they’re delivering the content to their class as a member of the Greek system.”

While drama and acting typically fall under non-traditional ways of teaching, experiential education is not necessarily exclusive to conventionally hands-on material. Campana explained how she teaches a master’s degree program in the United States for teachers using an approach known as Integrated Arts Education, which utilizes fine and performing arts to teach kindergarten through grade 12 non-art teachers how to use the arts to enhance student engagement in classrooms.

The Art of Teaching Art

The theatre professor recognizes the impact of technological advancement on the existing methods of teaching. “Teaching has become very hard," she reflected. "I mean, there is very little factual information that I can give you that you can’t just go look up. My job is to give [students] the needed information, but also have them do something with it.”

At the beginning of each semester at AUC, Campana has been using introductory forms that students are required to fill out. She emphasized the importance of teachers getting to know their students to deliver the information in ways that are more relevant to them. Campana asks her students about their respective majors, their aspirations in life as well as reasons for taking her class. If she is aware of which student is majoring in which subject, she can work to make connections between the content she is teaching and the content students are learning in their departments of major, inspiring them to effectively use the information upon leaving the classroom.

Campana pointed out how the art scene has changed in the past few years in relation to socioeconomic status. “Theatre has tended to be an art form more accessible to people with means,” she explained. “It takes time to go view art, and for people who don’t have time or the money, it’s a discretionary activity that doesn't add to their lives. It’s unfortunate because art teaches us and makes us think and hopefully, activates some change.”

Director of the successful student performance of Lysistrata at the University, Campana pointed out that AUC students are able to learn all about theatre. “AUC is in an incredible position to be a major changing force in the theatre scene in Egypt,” she said. “The students are so talented. But what I’d like to see is AUC alumni work together to form their own theatre company.”

Establishing a company of actors, directors and designers working as a group to produce a number of plays every year requires hard work, according to the theatre professor. “We would have to produce about two to three plays once a year for maybe five years,” Campana explained, adding that achieving consistency in this regard would be the main challenge when it comes to implementing such a concept. However, she does not deem the process an impossible feat and believes that with the alumni’s effort and dedication, the project is very much a doable one.

Campana studied acting at the California Institute of the Arts, performance studies at New York University’s Tisch School of the Arts and has earned an interdisciplinary PhD in theatre and the social sciences. Campana’s book, Acting Successful: Using Performance Skills in Everyday Life, is used as a required textbook at several universities and schools.