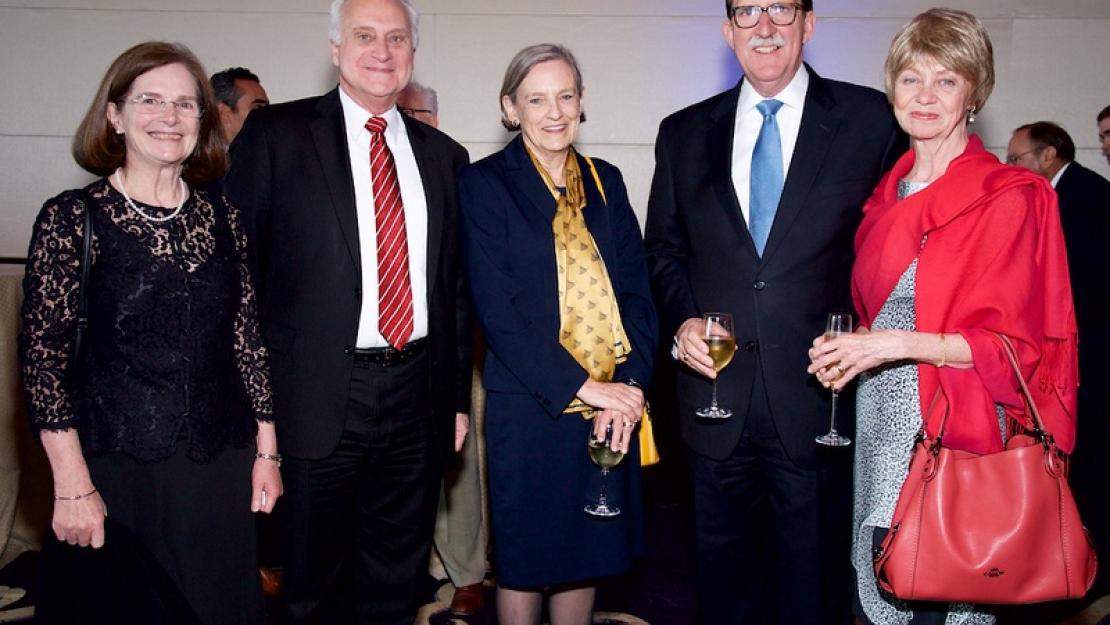 For the seventh year, AUC hosted its annual Benefit Dinner in New York, raising more than $600,000 to go toward the Center for Arabic Study Abroad (CASA) Endowment Fund.

Prominent and long-standing members of the AUC community, along with Egypt’s Minister of Investment and International Cooperation Sahar Nasr '85, '90, were present to thank donors and encourage support for the University.

TV writer and producer Lois "Elle" Johnson opened the event by describing her time at the University in 1986, when she came as a presidential intern to work in the Office of Development. "Although I was not a CASA participant, AUC’s Presidential Internship program opened my eyes to this part of world," said  Johnson, now a writer and producer for shows including CSI: Miami and Law & Order. "It was also my first time living outside of the U.S., in a place where I didn’t speak the language and couldn’t read any of the signs.”

Johnson continued, “I was a black girl who had attended predominantly white schools. At AUC, my right to be there was never questioned. To be thought of as ‘other’ in your own country then go halfway around the world to finally, casually, be accepted as ‘American’ was an incredibly empowering experience for me. Being at AUC, being in Egypt, made me believe I could do anything.”

Over the last 50 years of its existence, CASA graduates have shared Johnson's feeling of empowerment through immersion.  A number of the program's alumni came to the dinner -- one of whom took the mic to share her success story.

Susan Peters, who graduated from CASA in 1998, described how much the program influenced her language skills and preceding career, which has been spent in nonprofit management, with a focus on the Middle East and North Africa region.

CASA requires prior Arabic knowledge, and when she got here, Peters said she “was still at the stage where [she] could kind of get the joke but… usually missed the punchline.” Citing a professor, the late Elsaid Badawi, professor emeritus of applied linguistics who received CASA's Lifetime Contribution Award, she referred to the moment when you become fluent in a language as the “moment when the penny drops.”

“There’s a moment when you stop having to pay attention to language and get to engage in a meaningful exchange of ideas in that language. It’s when you actually get the punchline,” Peters said. “CASA’s real gift is that moment when the penny drops. It provides a self-confidence and familiarity that allows you to be a participant in another culture, not just a student or observer.”

CASA was established in 1967, after a U.S.-based Joint Committee of Near and Middle East Studies decided to establish an Arabic-teaching program abroad.

CASA’s reputation swelled. Since its inception, the program has trained more than 1,500 upper-level undergraduates, graduates and professors, who complete the program gaining a better understanding of Egypt and the Arab world. The CASA consortium has grown to include 28 universities and colleges in the United States that oversee the academic, financial and administrative aspects of the CASA program, with one member -- currently Harvard -- acting as the U.S. administrative base.

"Of course AUC strives for excellence in all of its programs, but when it comes to teaching Arabic to foreigners, AUC’s aspiration is to be nothing less than the finest program in the world," said Richard Bartlett, chairman of AUC's Board of Trustees. "No Arabic is as useful as Egyptian Arabic, and there is no better place to learn it as a foreigner than at AUC."

AUC created the CASA Endowment Fund to buoy the program after U.S. federal cutbacks that eliminated its funding. The endowment ensures that the prestigious program will continue to thrive, said President Francis Ricciardone. "AUC is building an endowment so that CASA remains a permanent place for talented Americans and others to advance their Arabic and immerse themselves in the daily life of Cairo –- the heart of the Arab world," Ricciardone said to the crowd gathered in New York’s Mandarin Oriental Hotel.

Ricciardone thanked the night's donors, and everyone gathered, by emphasizing the importance of their gifts. “In today’s world, the need to develop future leaders with a personal, in-depth understanding of the Middle East is needed more than ever before,” he said.