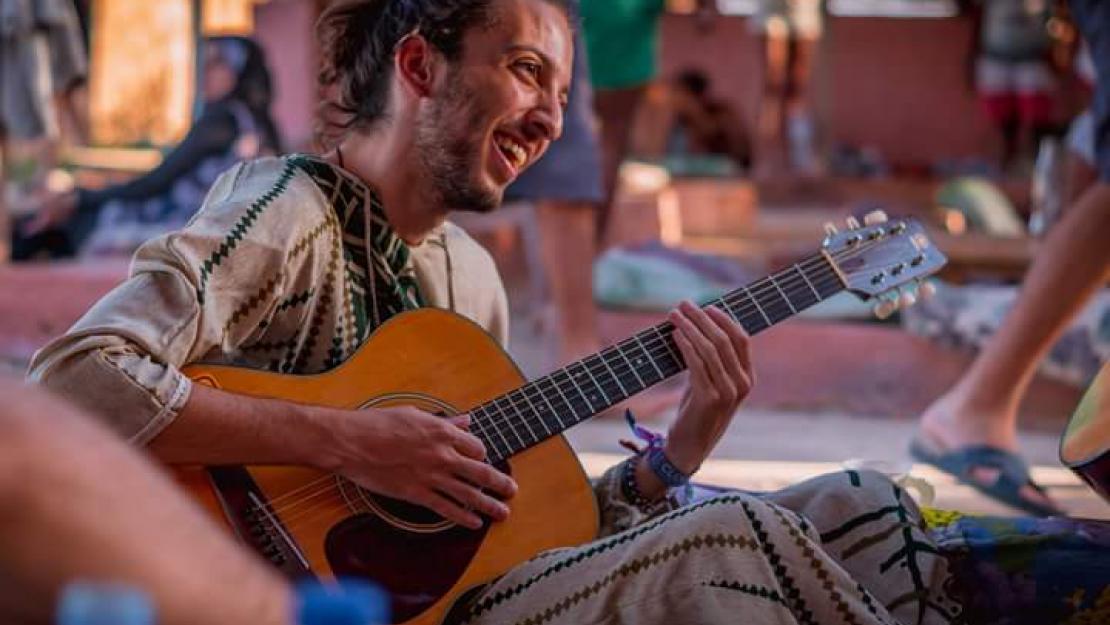 School of Science and Engineering
By
Aliah Salih

They’re uncomfortable to talk about and scary to think they could happen to everyone, but they do: catfishing, sexploitation, sextortion and blackmailing. Ahmed Hosam Refai ’18 –– music technology and multimedia journalism graduate –– chose these as the main topics for his award-winning audio documentary, Catfishing in the Nile: Sexploitation and Online Blackmailing in Egypt.

Why Catfishing – Why Women?

“I was working on a random night of November 2016 when I received a text from a friend. It said, ‘Help me! I’m freaking out; someone is blackmailing me!’” Refai recounted at the beginning of his audio documentary.

The friend trusted a catfish – a person who poses as someone else online –– and sent him personal photos of herself. The catfish’s true colors came out, and he began making demands that ranged from sex to sending him money.

“Essentially, the topic is sexual exploitation, which is done through a variety of ways, usually by an abusive ex-boyfriend, a hacker or a catfisher,” he stated.

It wasn’t just Refai’s friend. It was a growing number of Egyptian women being trapped into a cycle of sexploitation, sextortion and blackmail by catfish or by people they know – this is why Refai chose this as the topic of audio documentary. In his audio production class, under the supervision of Kim Fox, associate professor in the Department of Journalism and Mass Communication, he had to produce a 6 – 8-minute audio documentary.

“I focus on women –– even though men might have had to face similar situations –– because this does affect women more aggressively and strikingly,” he explained. “My documentary delves into personal stories of women who had to deal with this. The most challenging part of it is finding those who are comfortable enough sharing their experiences.”

The main reason that makes women a target, which permeates the many sects of Egyptian society, is patriarchy. The lack of agency –– for women –– that comes with their body politics create a space for predators to take control, often threatening them with exposing them to their community of family and friends. “Egypt is a fertile environment for this type of blackmail,” he remarked. “Victims of online blackmail find themselves being blamed for sharing such photos before marriage. This makes compromising material such as photos, videos or even information a potent weapon in the hands of the blackmailer.”

One of the victims interviewed, Ghadeer, who is a feminist activist, was blackmailed with a video she had sent to her then-boyfriend. In a classic blackmailer style, he used the video as a means of trying to get her back, which she refused. Women like Ghadeer took matters to the authorities, knowing very well the social risk associated with that.

Refai says that there has to be a second side to the story of his documentary. Since he was unable to talk to any predators, due to his project not allowing anonymity, he decided to try talking to security services. After several attempts, he was eventually to get a hold of telephone intelligence services and he inquired about protocols regarding internet crimes — he was told there was no number available for internet intelligence services.

What he found out was that the victims had to go themselves to report. In a rare occurrence, Ghadeer went ahead with these legal procedures and was able to get her blackmailer convicted of defamation. Despite this victory, Refai states that the video spread in later years. “It invited a barrage of bullying,” he explained. “At that time, she had made a name for herself as a feminist activist, which made her an even more appealing target. Private blackmail had turned into public shaming. What she did next is the best part of the story.”

Ghadeer reported the video her ex blackmailed her with and then posted it herself. She was able to reclaim back that cyber space, which was once a battlefield where she had to fight for her honor. “Now I am posting my own video, and I post them to affirm that we women have the right to post our bodies online without being ashamed, without being stigmatized,” she affirms. “The cyber [world] is a space where we [can] defend our bodies and our right to that space. So I post my videos now. I am very happy with what I am doing.”

"I knew that within the context of our society, if I went through any legal channel, I'd end up being shamed. I'd end up being told I was the one at fault. Being aware of that has led me to go to my most viable option. I resorted to blackmailing back."

On the other hand, Fatma, another interviewee Refai presented, chose to not report to authorities, since there is a risk of exposure that comes with that. "I knew that within the context of our society, if I went through any legal channel, I'd end up being shamed,” she recounted. “I'd end up being told I was the one at fault. Being aware of that has led me to go to my most viable option. I resorted to blackmailing back. I knew a couple of people who may be categorized as ‘thugs’ or whatever. I knew them, and I had helped them before. You can’t face someone who is blackmailing you alone. You have to find someone who they’d fear more.” This actually worked, and as Refai puts it “curbed the spread” of whatever was being used against her.

The eye-opening audio documentary is just the start for Refai, who is interested in the genre as well as podcasts. “I didn’t have a particular interest before this class,” he reflected. “The class gave me the motivation, skills and aesthetic qualities of audio documentary, and I have to thank Professor Kim Fox for that.”

A reporter at heart, the former senior editor at the student newspaper, The Caravan, just graduated, and he is looking forward to reflecting and analyzing more issues –– in print and online.