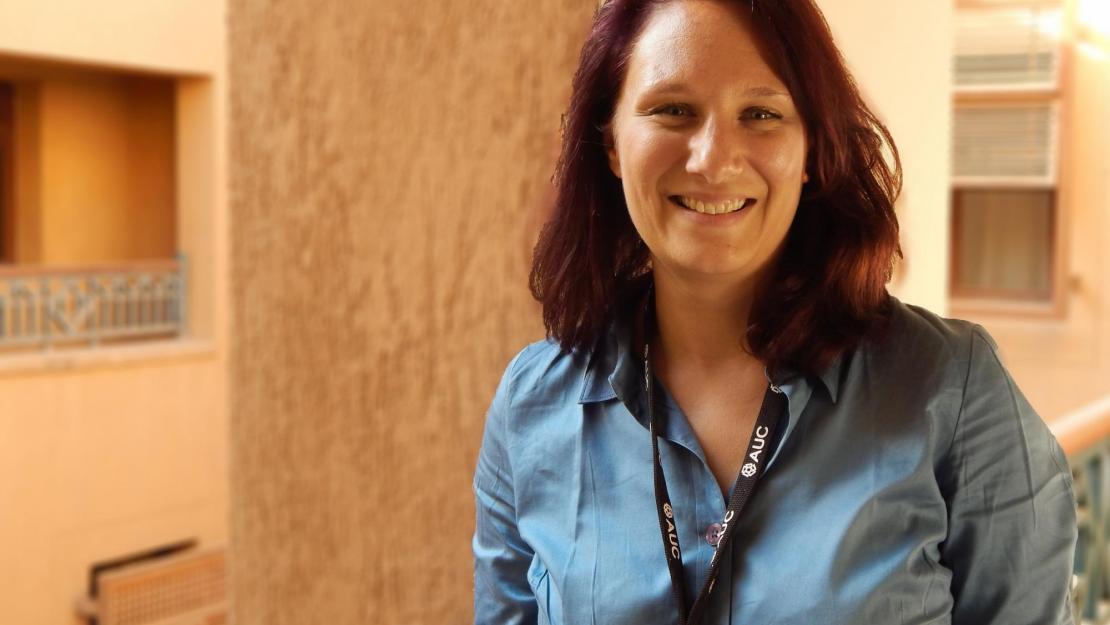 Holly Oberle, assistant professor in the Department of Political Science in the School of Humanities and Social Sciences, says she’s still “getting her feet wet,” having only joined AUC last fall.

Oberle’s academic journey so far has been international in every sense, to say the least. Before her post at AUC, Oberle was teaching at the Asian University for Women in Bangladesh, and prior to that, she did a postdoctoral fellowship at the Hebrew University in Jerusalem and completed her MA and PhD in Germany. With this experience, she is working at AUC on integrating innovative teaching methods in her classes, conducting impactful research and launching a gender studies symposium.

“There are here a lot more resources here at AUC than where I was,” she said, citing services such as the University’s Center for Learning and Teaching. “And a lot of institutional support as well.”

​Oberle’s teaching methods –– influenced by working in a global context –– mirror AUC’s environment and pedagogy of pushing students to delve into the international community.

This semester, Oberle is creating two online simulations for students in her International Organization seminar. In one simulation, students are assigned different countries in a peacekeeping operation, where they will be faced with a fictional terrorist attack and are expected to respond. In another more recent simulation, students are also assigned several countries, but they are part of the International Whaling Commission. “They are supposed to negotiate on whether commercial whaling should be banned or not,” she stated. While whaling seems like a random and almost irrelevant topic for students at AUC, it is meant to introduce them to the art of leading discussions and reaching decisions.

“It teaches them negotiation and diplomacy skills, instead of staring at a PowerPoint lecture,” Oberle explained. “The simulation is an organization based on consensus, not vote. So essentially it looks at comparing decision-making strategies in politics and how different organizations operate in long-term projects.”

A gap in the field of studying political science that Oberle noted is the disproportionality between talking about political theories and focusing on current events in class. She is working to combat that in her International Relations course this semester by creating an online publication, where students are expected to produce up to three articles. The students, who prefer to call it a newspaper rather than a blog, are tasked with the goal of paying attention to what’s going on around them. “It’s great to talk about theories, but what’s going on right now is so interesting,” Oberle commented. “In lectures, we’re working a lot with the theories and connecting them with history, but then I want students to use these same theories and concepts to make better sense of the world in which they live and shed light on the issue.”

Oberle, whose background and training fall under the field of international relations, focuses a lot of her research toward gender in relation to foreign policy. This comes as no surprise, having worked at an all-women university in Bangladesh –– Asian University for Women. She is currently working on projects that look closely at gendered language in politics.

Her past work focused on how gendered language and metaphors have played out in American foreign policies. She looked at how this use of language unfolded starting from the Cold War all the way to the present under U.S. President Donald Trump. “It is a comparative analysis that looks at how presidents used sexual assault metaphors as a policy legitimation process,” she explained. “The biggest example I focus on is the first Bush administration, trying to convince the public that America needs to intervene when Iraq invaded Kuwait. It took a while. First, they equated Saddam to Hitler, then went on to say that ‘Iraq is raping Kuwait,’ and you can trace public opinion polls and see how Americans started approving of the intervention.”

Another gendered language discourse she looks at in foreign intervention is democratization and peace, specifically referring to women’s rights. “It operates, again, as a mental shortcut,” she said. “They link it to women’s rights, such as access to education and the right to vote –– and it’s no longer just about democracy, but the need to get a specific group access to these rights.”

Currently, Oberle is working on a proposal for what she hopes will be a book, where she will explore and update her past work and closely examine the current Trump administration’s language.

Coming to Egypt, Oberle admittedly says that her research has not yet looked at topics that are prominent in the field of gender in the country. She believes that she came in with a “CNNized” version of the revolution, and it has been interesting to have conversations with students about the event and how they remember it, and how gender played out at the time. “It’s been a good opportunity for me to step out of the lecturer position and be the learner, and hear from students,” she remarked. “I feel that with the research people are presenting –– like new books, post-revolution gender relations –– there are a lot of interesting things going on. The conversations happening at AUC and outside of the University are really fascinating. They’re certainly contributing and informing my perspective as an American.”

Working with her colleague, Nora Salem, assistant professor in the Department of Political Science, who is also new to AUC, Oberle managed to launch a weekly symposium on gender every Sunday at assembly hour, where faculty members are able to present their papers and research. Seeing the potential with AUC’s Cynthia Nelson Institute for Gender and Women's Studies and the School of Global Affairs and Public Policy, they found that it’s a great niche for a gender studies community. “After socializing, we realized there are a lot of people in psychology or political science who are not branded as ‘gender studies,’ yet are working in the field through their research,” she said. “So we thought, ‘Why not bring them together, have a community and an opportunity for cross-departmental research? I’m surprised to see up to a dozen students give up their lunch period to come listen to faculty’s PhD papers and projects. It shows the community’s interest, and it’s a great start.”

Oberle hopes that in the future, there can be room for launching a women’s studies major and minor at the undergraduate level.