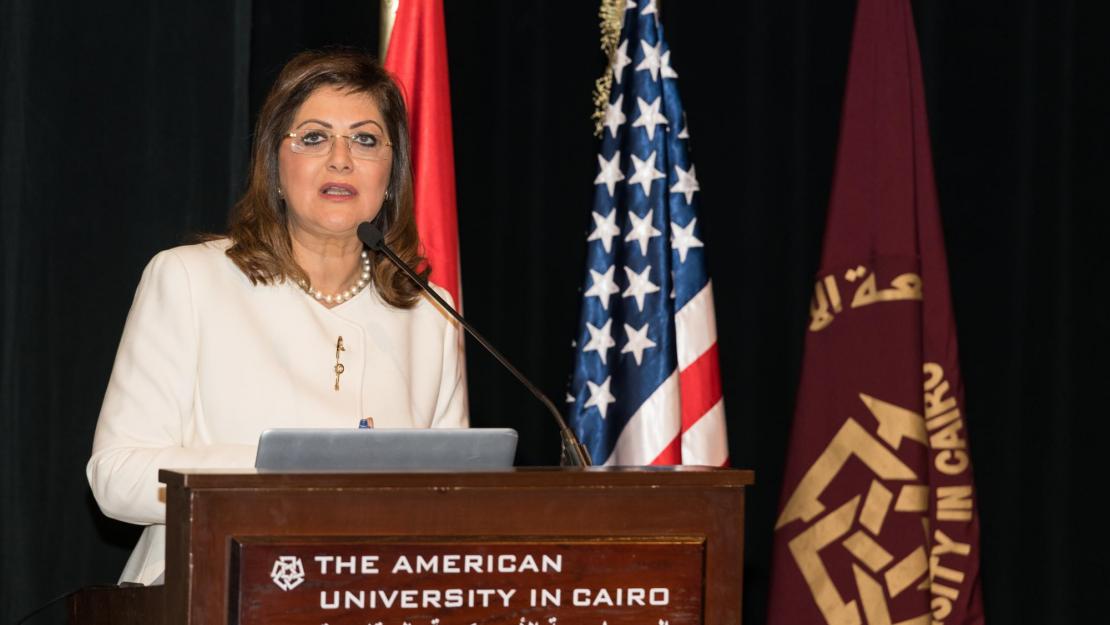 AUC’s student-run Model Council of Ministers (MCM) and delegates from 37 public and private Egyptian universities gathered at the University to share their visions of Egypt in 2030 and consider the challenges surrounding the country’s sustainable development goals.

The summit focused on 15 different projects under four main pillars: economic development, energy, urban development, and education and training. Depending on their individual interests, students were divided into teams, along with members of other universities, and developed action plans revolving around Egypt Vision 2030, the country’s sustainable development strategy.

At the closing ceremony, students were able to hear from Minister of Planning, Monitoring and Administrative Reform Hala El Said and Vice Minster of Higher Education Essam Khamis, on Egypt’s economic conditions and their ministries’ goals as they work toward Egypt’s vision for 2030. All projects were submitted to the two ministries. Additionally, the teams with the best projects – chosen by a faculty panel – presented their work. These projects dealt with integration of the informal sector in the economy; renewable energy resources; challenges and opportunities in vocational education; and transportation to new urban communities.

Since 2011, AUC’s MCM members have focused on raising political awareness among their peers. With this large gathering of university students from all over Egypt, they have taken an extra step to immerse themselves in a nationwide dialogue. “Every year, we introduce something new that acts as a supplement to the quality of the service we provide,” reflect Ahmed Hamza, president of MCM and mechanical engineering junior. “From all over Egypt, we met together for the same goal: a better Egypt.”

Mohamed Heggi, awareness and strategic relations manager of MCM and summit chair, highlighted the summit's three main objectives: “spreading  awareness about the concept of sustainable development and Egypt Vision 2030, engaging youth in planning for Egypt’s future and introducing students from across Egypt to one another.”

President Francis Ricciardone praised “the future ministers of Egypt” for their dedication to exploring how governments can respond to society’s needs. “One of the great initiatives that Counselor Ashraf Hatem has facilitated with Minister Hala has been internships for this organization, MCM, inside the ministries, so our students get to see the challenges facing the government and how difficult it is to meet the needs of this great country,” Ricciardone said. “Thanks to initiatives such as these, our students are not thinking about this from a theoretical way, but are thinking about this in the way that government officials and ministers do. It is the best way of learning.”

Along the same lines, El Said discussed the importance of working with Egyptian youth in Egypt’s strategy for 2030, highlighting university organizations like MCM for engaging students in political discourse and crucial dialogue on how to better the community through government policy. “These activities, and especially simulation models, not only provide the needed scientific skills for students, but also develop their leadership, teamwork and analytical skills,” she added.

While the three-day event prompted students to present their own ideas on Egypt Vision 2030, it also gave the teams the opportunity to learn about Egypt’s economic reform program from government officials themselves. “Egypt has faced so many challenges,” El Said noted. “We have devised an economic reform program in 2016, which might be the strongest and the most difficult in Egypt’s history, yet we have witnessed an increase in growth rates from 3.6 percent to 5.3 percent this year.”

El Said continued to explain how inflation rates and unemployment have also decreased, sparking confidence as Egypt moves toward its sustainable development goals. On Egypt's goals for 2030, El Said emphasized that success in achieving sustainable development goals is dependent on collaboration between civil society and the private sector. “The government can’t do everything on its own, and in this strategy, the government acts as a coordinator,” she explained.