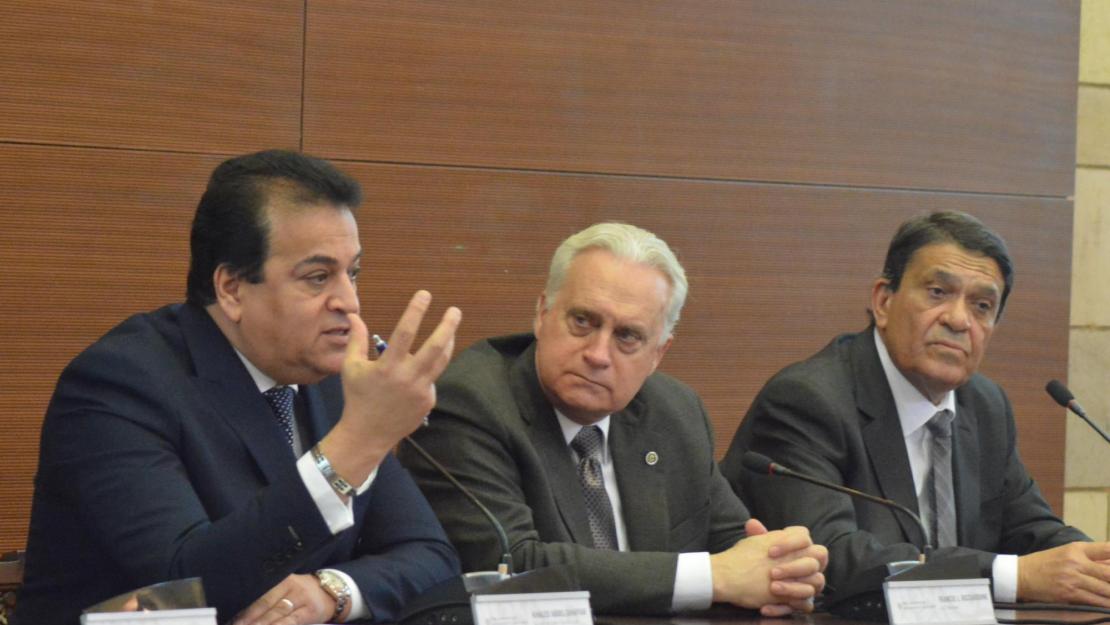 With the Egyptian government's plans to establish several International Branch Campuses (IBCs) in the New Capital underway, the government has asked AUC -- as a long-standing, successful IBC itself -- for input on their development.

A number of leaders in higher education, including AUC President Francis Ricciardone and Minister of Higher Education Khaled Abdel Ghaffar, recently gathered on campus for a forum on IBCs -- institutions of higher education owned at least partly by a foreign education provider, operating and offering degrees in the name of that provider.

“We have been here almost 100 years in the service of Egypt,” said Ricciardone, in his opening statement at the forum, “ We feel this country is safe. We have been here through regional wars, revolutions, crises, economic crises, and there’s an underlying energy of this country and a progress of this country that we can bear witness to. We are enthusiastic supporters of the field. We welcome the vision that President El Sisi, the government and the minister have shown.”

Along with AUC faculty, the forum also included representatives from the State University of New York school system, the University of Liverpool, Georgetown University and the Development Authority of Dubai. Each of the speakers elaborated on the definition, purpose, successes and challenges of IBCs, and took questions from the audience.

The day’s main message was that, globally, the need for and interest in international education is growing. The numbers of IBCs worldwide has grown by 26 percent in the last five years, reaching 249 campuses, said Minister Abdel Ghaffar, adding that there are now 76 countries hosting IBCs all across the map.

Abdulla Al Karam, director general of the Knowledge and Human Development Authority of Dubai, said he’s seen this growth in the United Arab Emirates as well. "We were trying to figure out how many students come in specifically to study at these branches,” he said. “We were pleasantly surprised to see it was 30 percent.”

Universities and governments, the experts said, must now rise to meet that expanding pressure.

After giving a playful nod to Liverpool Football Club favorite and Egyptian soccer hero Mohamed Saleh, University of Liverpool Deputy Vice-Chancellor Patrick Hackett followed up on this message by stating his university’s strategy to be “Liverpool-centric, but globally connected.”

This is a mission AUC is familiar with. The University has partnerships with universities all over the globe. Most recently, it expanded its collaboration with the University of Seoul in South Korea. An audience member asked why partnerships like these are not more favorable than IBCs, as they are less expensive and require fewer resources.

"I think actually there's room for both," Kackett responded, "My view is that the demand for higher education in Egypt and elsewhere in the world is only growing; it's upwards...IBC's offer a different type of opportunity for students...If Liverpool were to come to Egypt for example, we would not at all see ourselves as coming as a competitor. We would see ourselves as a partner.”

Kelly Otter, dean of the School of Continuing Studies at Georgetown University, echoed this sentiment. She added that international liaisons both make American students more competitive and contribute to economic development for the country by creating an educated workforce.

“What do we want from IBCs?" pondered Ghada Barsoum, associate professor in AUC's Department of Public Policy and Administration. "We want them to address our concerns. Address concerns of quality, of access. We want to make sure that there is equivalence of what is being provided here compared to what is being provided in the home country. This is an essential policy goal. We have the largest higher education system in the region; there are 2.3 million students enrolled in this system. We have increasing massification. It's not just for the elite; it's for everyone.”

Any risk -- cost or otherwise -- associated with opening a branch campus, the experts agreed, is worth it in the end. “I always look back at my work in branch campuses, [and think] what if in 2002 I was told this would not be legitimate and not accredited?” Al Karam said. “Where would the 30,000 students be studying today?”